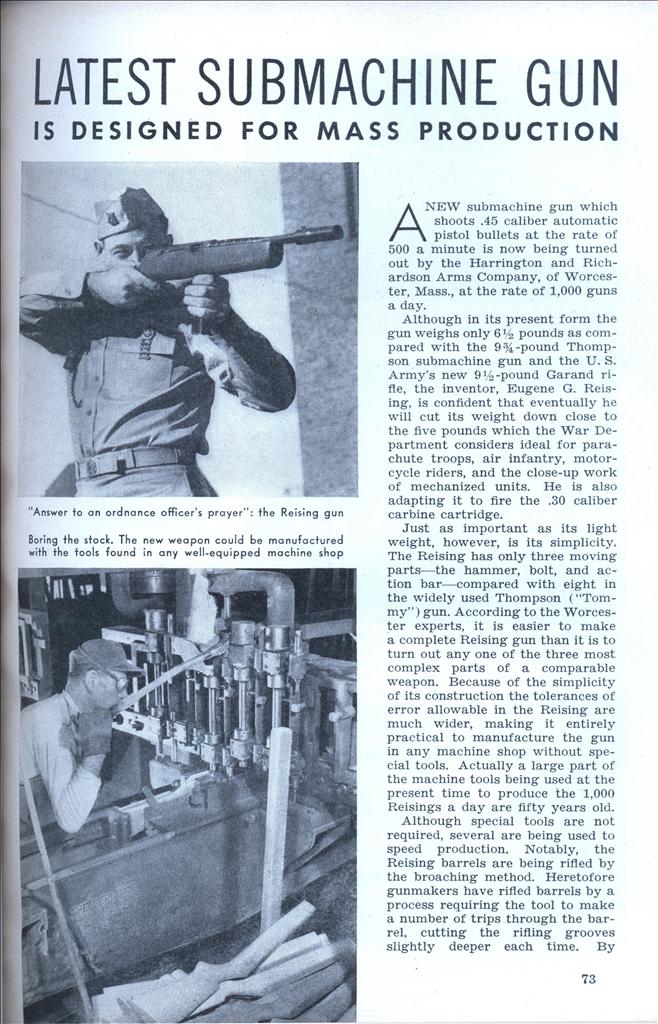 ANEW submachine gun which shoots .45 caliber automatic , pistol bullets at the rate of 500 a minute is now being- turned out by the Harrington and Richardson Arms Company, of Worcester, Mass., at the rate of 1,000 guns a day.

Although in its present form the gun weighs only 6-1/2 pounds as compared with the 9-3/4-pound Thompson submachine gun and the U.S. Army’s new 9-1/2 pound Garand rifle, the inventor, Eugene G. Reising, is confident that eventually he will cut its weight down close to the five pounds which the War Department considers ideal for parachute troops, air infantry, motorcycle riders, and the close-up work of mechanized units. He is also adapting it to fire the .30 caliber carbine cartridge.

Just as important as its light weight, however, is its simplicity. The Reising has only three moving parts—the hammer, bolt, and action bar—compared with eight in the widely used Thompson (“Tommy”) gun. According to the Worcester experts, it is easier to make a complete Reising gun than it is to turn out any one of the three most complex parts of a comparable weapon. Because of the simplicity of its construction the tolerances of error allowable in the Reising are much wider, making it entirely practical to manufacture the gun in any machine shop without special tools. Actually a large part of the machine tools being used at the present time to produce the 1,000 Reisings a day are fifty years old.

Although special tools are not required, several are being used to speed production. Notably, the Reising barrels are being rifled by the broaching method. Heretofore gunmakers have rifled barrels by a process requiring the tool to make a number of trips through the barrel, cutting the rifling grooves slightly deeper each time. By broaching, the 11-inch barrel of the Reising is rifled in one trip through, taking only one minute instead of the old method’s 15 minutes. With the installation of an automatic lathe, only 12 minutes will be required to finish a barrel, from the solid steel bar to the final bluing.

Simple as it is, the Reising is capable of grouping a high percentage of its shots inside a ten-inch circle at 200 yards, and that, remember, is with standard .45 automatic pistol ammunition. One reason for this accuracy is the compensator, which is screwed onto the muzzle like a silencer. Slots on its top side permit the gases leaving the muzzle to expand upward, while a small shelflike projection on the under side of the compensator takes a downward push from the gases, and these two effects combine to keep the muzzle down and on the target, eliminating almost all the “jump” of the muzzle. The recoil, or kick, also is very slight.

The .45 caliber bullet leaves the muzzle at a velocity of 900 feet a second. Velocity and the bullet size both figure in the hitting force and penetrating power. Rifle and carbine bullets tend to drill a clean hole through a man, and he may continue to advance for some yards after being struck in certain parts of his body. The .45 caliber slug, on the other hand, will almost always knock a man down or spin him around—a valuable asset in close-up fighting where it is necessary to disable the other fellow before he can get you.

The Reising gun takes a 20-shot clip magazine, and a 50-round drum can be adapted to it if wanted. Thanks to its simplicity, it can be sold for around $85, or, in military mass production, for $45 to $50, which is a lot less than the $225 price of a comparable submachine gun now in wide use.

Like the Thompson, the Reising gun is of the delayed blow-back reloading type. A pressure of 42 pounds is required to force the bolt to cam itself out of a locked position. A shoulder half encircles the upper part of the bolt; this fits snugly up against a mating recess in the upper inside part of the receiver. These locking parts are milled at an angle to provide transfer of the reaction from one plane to another. The reaction pushes the fired cartridge shell back until it engages the ejector and is flipped out. The same movement cocks the hammer. A retracting spring pulls the bolt forward; on its way the bolt picks up a loaded cartridge from the clip and feeds it into the chamber and then fires it. The whole takes (at the rate of 500 a minute) about 3/25 of a second.

Despite its short barrel, the gun has a sighting radius of 18-1/2 inches. The barrel, of nickel chrome steel, has cooling fins similar to those on the Thompson gun. After 100 rounds rapid fire it is not sizzling hot, and one of the first Reising guns made has been fired more than 9,500 times without any signs of charring the stock and also without overhauling.

The gun can be taken apart without even using a cartridge as a tool. Unlike other submachine guns, it does not have to be lubricated continuously, and Army tests at the Aberdeen, Md., proving grounds showed that it could even be fired dry of oil. In these tests, 3,470 rounds were fired with but two failures, one due to a defective cartridge and the other ascribed to incomplete locking of the breech.

The inventor, Reising (pronounced “Riseing”) holds more than 60 patents on pistols and guns. Many experts consider his .22 caliber automatic pistol the best ever made in this country. Of Swedish stock that came to Delaware in 1635, Reising was born at Port Jervis, N.Y., son of a railroad engineer who died when Eugene was an infant. The boy attended Lehigh University three years, then punched cattle in Texas and Mexico a few years. On returning north, he went to work for Colt, testing and selling arms. He helped John Browning develop the famed Colt .45 automatic pistol.

Just before the first World War, Reising designed a simplified machine gun. Later he designed repeating and automatic rifles for Mossberg & Sons, Marlin, Savage, and Stevens. The keynote of nearly all his 30 designs is ease of manufacture.

Besides the U.S. Army, the war departments of Great Britain, Greece, the Netherlands East Indies, Iraq, and several South American countries have expressed keen interest in this apparent answer to an ordnance officer’s prayer: a simple, very light, easily made arm, sturdy, dependable —that can be turned out in a shop without costly equipment.—Walter Holbrook.