In the 1940’s practically every issue of Popular Science had a detailed chemistry article with experiments for teens to perform. I’m going to begin posting them in the new Chemistry category. 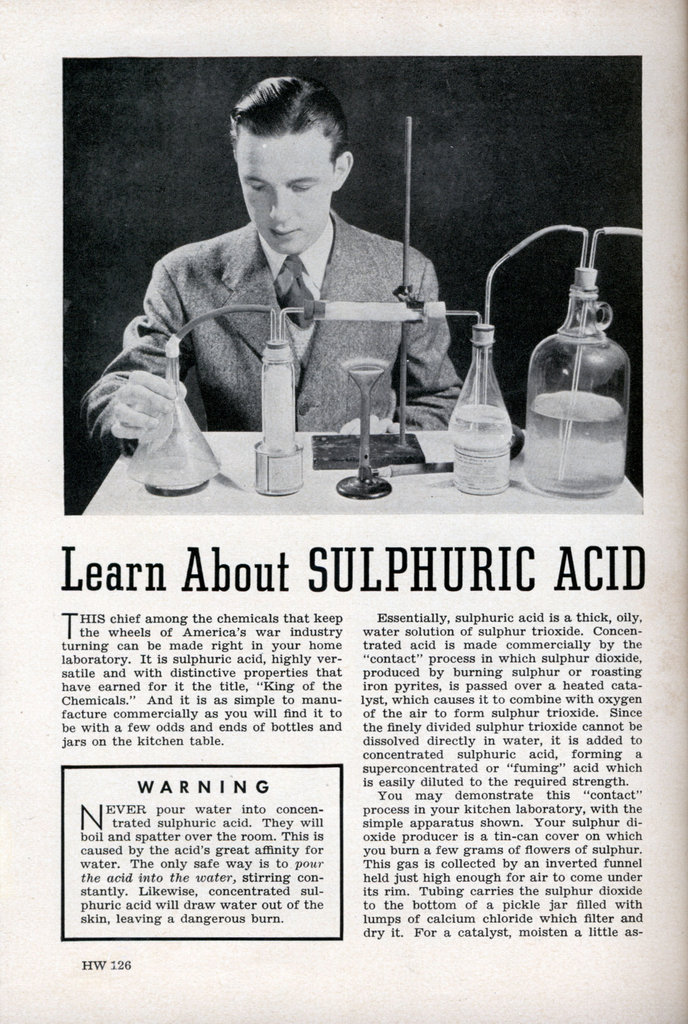 THIS chief among the chemicals that keep the wheels of America’s war industry turning can be made right in your home laboratory. It is sulphuric acid, highly versatile and with distinctive properties that have earned for it the title, “King of the Chemicals.” And it is as simple to manufacture commercially as you will find it to be with a few odds and ends of bottles and jars on the kitchen table.

Essentially, sulphuric acid is a thick, oily, water solution of sulphur trioxide. Concentrated acid is made commercially by the “contact” process in which sulphur dioxide, produced by burning sulphur or roasting iron pyrites, is passed over a heated catalyst, which causes it to combine with oxygen of the air to form sulphur trioxide. Since the finely divided sulphur trioxide cannot be dissolved directly in water, it is added to concentrated sulphuric acid, forming a superconcentrated or “fuming” acid which is easily diluted to the required strength.

You may demonstrate this “contact” process in your kitchen laboratory, with the simple apparatus shown. Your sulphur dioxide producer is a tin-can cover on which you burn a few grams of flowers of sulphur. This gas is collected by an inverted funnel held just high enough for air to come under its rim. Tubing carries the sulphur dioxide to the bottom of a pickle jar filled with lumps of calcium chloride which filter and dry it. For a catalyst, moisten a little asbestos fiber and shake it with a quarter of its bulk of iron oxide. When thoroughly mixed, dry in an oven and pack loosely in the glass tube which is arranged horizontally in your setup. The remaining flask contains concentrated sulphuric acid. The half-gallon jar is a siphon bottle which draws the gas through.

The Bunsen burner must be adjusted for gentle heat or the sulphur trioxide will decompose again. A marked increase in the concentration of the sulphuric acid in the flask occurs in a few minutes. By adding it to waterâ€”in diluting, always pour the acid into the waterâ€”you get a greater quantity of acid of the original strength.

Sulphuric acid is used in making many other acids. As an example, nitric acidâ€” tremendously important in manufacturing explosives and cellulose filmsâ€”may be made in your home laboratory, but use a glass retort as nitric acid reacts on cork and rubber. Through a paper funnel, drop 25 grams of sodium nitrate into the retort.

Carefully pour 20 cc. of concentrated sulphuric acid on the nitrate. Arrange the retort with its stem extending into a test tube immersed in ice water and its bowl resting on a square of wire gauze with an asbestos center. When the crystals are thoroughly moistened, heat the retort gently, distill at a low temperature until no more vapor condenses, and then allow to cool. The drops of liquid in the test tube will be pure nitric acid. HANDLE WITH CARE!

An important property of concentrated sulphuric acid is its eagerness to absorb waterâ€”a property employed to dry gases which are bubbled through and to remove water formed during chemical reactions.

This dehydrating action can be demonstrated by dropping sulphuric acid on sugar. The mixture boils, then blackens and swells.

Dilute acid does not absorb water, however, and this may be shown by an amusing “stunt.” Write with it on a piece of paper, and the writing will be invisible. Heat the paper, and the lines become visible as the water evaporates and the concentrated acid chars the paper.

Dilute sulphuric acid acts differently from concentrated in several ways, and, strangely enough, is often more active. Drop a little dilute acid on a piece of clean zinc or iron and it “attacks” the metal instantly, forming a sulphate and furiously releasing bubbles of hydrogen. Use cold concentrated acid and little or no action occurs. Heat the metal, and the concentrated acid will oxidize it and then form a sulphate.

One of the greatest uses of sulphuric acid is in the production of fertilizers. In 1941, nearly a fourth of the total production was applied to this purpose. Phosphate rock, as found in the earth, is practically insoluble and of no use to plant life. Treatment with sulphuric acid changes it into soluble calcium phosphate, a valuable plant food. Two other important uses, in storage batteries and in electroplating, derive from its high electrical conductivity.

Shake a little sulphuric acid with an equal amount of castor oil or olive oil, and the result is a thick dark-reddish material called Turkey-red oil, which is used in the dyeing industry as a “wetting agent” to make dyes penetrate more evenly and easily. Having molecules which are partly attracted to water and partly to oil, it lowers the surface tension of water, spreads more readily.