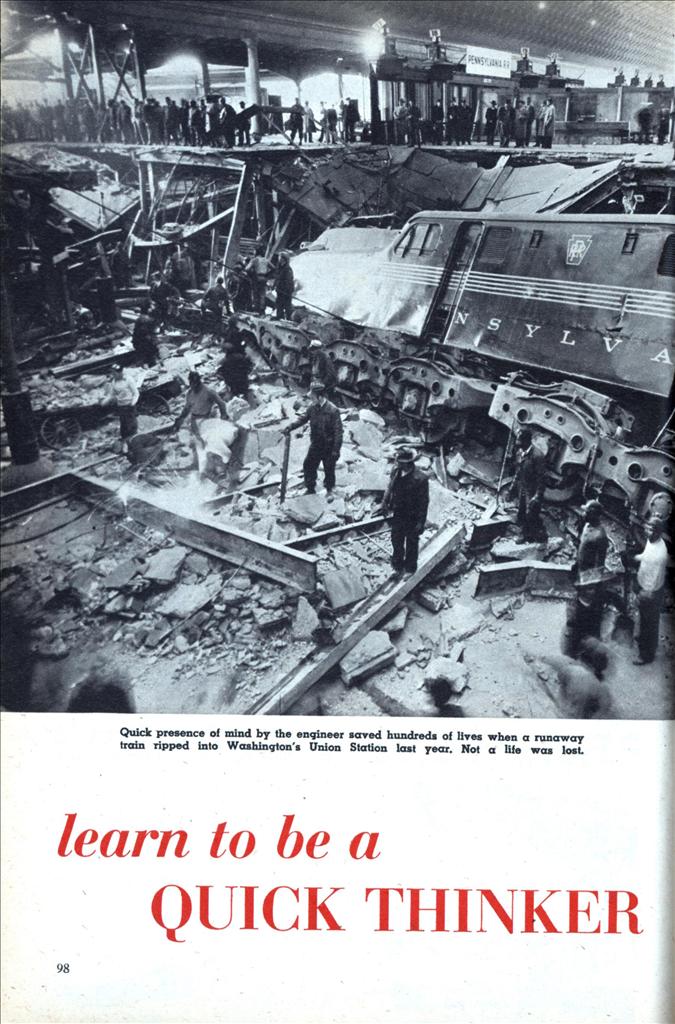 It was one of the most spectacular wrecks in railroad history—yet not a single person was killed!

The following day, on January 17, 1953, bank teller Louis Kimpel had a note shoved under his window in a Massachusetts bank. It read, “This is a stick-up. Give me the money or I’ll kill you.” With barely a moment of hesitation Kimpel addressed himself blandly to the grimy-looking note-passer. “Please take it over to the manager. I can’t read this,” he said.

Both these incidents, of course, took place miles apart and were apparently unrelated. It may seem that way to you. But to psychiatrists both were directly connected; for in each case it was quick thinking that saved the day—-and lives.

In the case of the train wreck, engineer Henry W. Brower of Philadelphia knew what was wrong. The brakes weren’t holding. The train was hitting 60 mph and better. Instantly, he reached for his signal cord and gave a series of short, loud blasts on the whistle. It was a rarely used emergency signal, one many railroad men have long since forgotten. This gave the towermen an extra few seconds in which to act. They knew something was wrong and let the train go through. Otherwise, it would have been derailed, causing an untold number of fatalities. Later, railroad officials issued a public statement praising Brower for his “quick thinking and action, for averting a major catastrophe.”

And Kimpel, who was trained to decipher all sorts of strange and difficult handwriting, was obviously thinking just a little faster than the gunman when he told him that he couldn’t read the note. The clever maneuver upset the bandit so much that he gave up his idea of robbing the bank and fled in panic.

Are you a quick thinker? Even if you’ve never had a chance to find out, it doesn’t matter. Psychiatrists agree that you can learn to be mentally fast on your feet if you want to. And quick thinking pays off in more ways than one. Naturally, its most rewarding feature is ability to think your way out of a jam in a hurry. And in some cases you may be able to save more lives than your own. Oddly enough in such cases you may not even be aware of any effort on your part to think.

Take the case of Bernard Jakubowski, a 32-year-old bus driver in Michigan City, Ind. Last March Bernard was driving his bus loaded with 60 school children. Behind his bus was a gasoline tanker and behind the tanker was a cattle truck. Suddenly, the cattle truck hit the tanker and sent it crashing into the back of the bus. Flaming gasoline engulfed all three vehicles. It killed the cattle truck driver almost instantly.

Jakubowski turned quickly, saw the back of his bus aflame and went into action. He could have stopped the bus and ordered the children to pile out of doors and windows. But he didn’t do that. Instead, he put the bus in low gear and pulled out the throttle slightly, opened the door and jumped out. To a casual observer this would have looked like a cowardly act. But the bus kept moving slowly away from the burning tanker and Bernard, running alongside the open door, shouted at the children to jump out one at a time. They didn’t hesitate to do so, either, for he was right there to catch them. They came out so fast he sometimes had to grab two and three at a time. As he yanked them off the bus, he pushed them safely out of the way. About 100 yards farther down the road, the bus came to a stop. But all the children were off already and none were hurt.

Was Bernard conscious of the fact that he was doing some quick thinking? Here’s his own answer: “I didn’t even think what I was doing. I just pulled out the throttle and jumped out before those kids had a chance to jam into the door.

“A lot of the kids were panicky. I was trying to accomplish two things when I started rolling that bus along. I was trying to get away from the fire and get the kids out. That’s about the way anyone else would have done it.”

Maybe that’s what Bernard Jukubowski feels. But the truth psychiatrists say, is that very few people would come up with the same answer to the way out of an identical jam. Here, for example, are a few actual situations that called for fast thinking. Try them on your friends and family.

Get their solution, check them against your own and then turn to the end of this article to see how they actually came out.

1. A man watching TV in the living room of his two-family house winced when the set suddenly went dead. He got up and announced to his friends sitting around the set that he was going to check the aerial on the roof.

Outside, it was freezing cold and the roof was covered with a thick sheet of ice and snow. Nevertheless, he got a ladder, got to the top of the roof and went to work. Soon he had things fixed. In fact, he could hear the set go on again—and it was real loud! But just as he started to go back down the ladder, it slipped to the ground.

He pounded on the roof and shouted at the top of his lungs. No one answered. They couldn’t hear him. Already his fingers were getting numb. A fire was going in the living room downstairs and he edged over to the chimney to keep warm. But he knew that unless he got down soon he might suffer a case of frostbite.

What would you have done?

2. In Kansas City, last January, two men went to the top of a 140-foot brick smokestack. They got there by using a series of iron hooks against the brick wall as a ladder. At the top, the men removed a heavy cast iron rim. Suddenly, the rim slipped and fell into the stack, knocking off all the iron hooks as it catapulted to the bottom. This left the men stranded on top with nothing but their repair tools and a rope that was much too short to lower either of them.

What would you have done to get down?

3. In a small New Jersey town a tiny kitten, perched atop a 40-foot narrow dry well, slipped and fell to the bottom. A little boy saw the cat fall and called for help. A group of men and women gathered but it was too narrow for anyone to try to go down the well on a ladder and get the kitten up safely. See solutions at end of article.

You can think logically only if you learn to control your emotions. This first rule for quick thinking means that you have to learn to keep calm. If you should be injured, for example, and allow fear to get the best of you, the pain you already feel will gradually begin to get worse.

Of course, other factors affect quick thinking and these have nothing to do with your ability to control your emotions. Say the experts: to be able to do the right thing at the right time you’ve got to have the tools.

So the second and perhaps more important rule for learning to think quickly is: acquire knowledge of the widest possible variety.

Last January an exhibitor was on his way to the 43rd National Motor Boat Show in New York with a 55-foot cruiser, the Capri. It was slated to be the feature attraction’ of the show.

But crossing under New York’s famed Third Avenue “El,” the superstructure of the cruiser proved to be too high and got stuck by inches. The police were called and were about to dismantle the top of the cruiser when out of the crowd stepped an ex-garage serviceman. Calmly, he walked over to the rubber tires of the cradle on which the cruiser was mounted and let out the air. The cruiser went down just enough to permit the police to tow it out and send it safely on its way.

Of course, you may never run into a low elevated. But if you remember the two rules for developing your ability to think fast, you can be sure you’ll be better armed to fight your way out of any future pinch. •

1. The man took off his jacket and put it over the chimney. This forced the smoke down into the living room. When the people in the living room came outside to investigate, he called for aid.

2. The men took the chimney apart, brick by brick, until they reached a point low enough to let themselves onto roof.

3. The mother cat was found and lowered on a line to the bottom of the well. She grabbed the kitten by the nape of the neck.