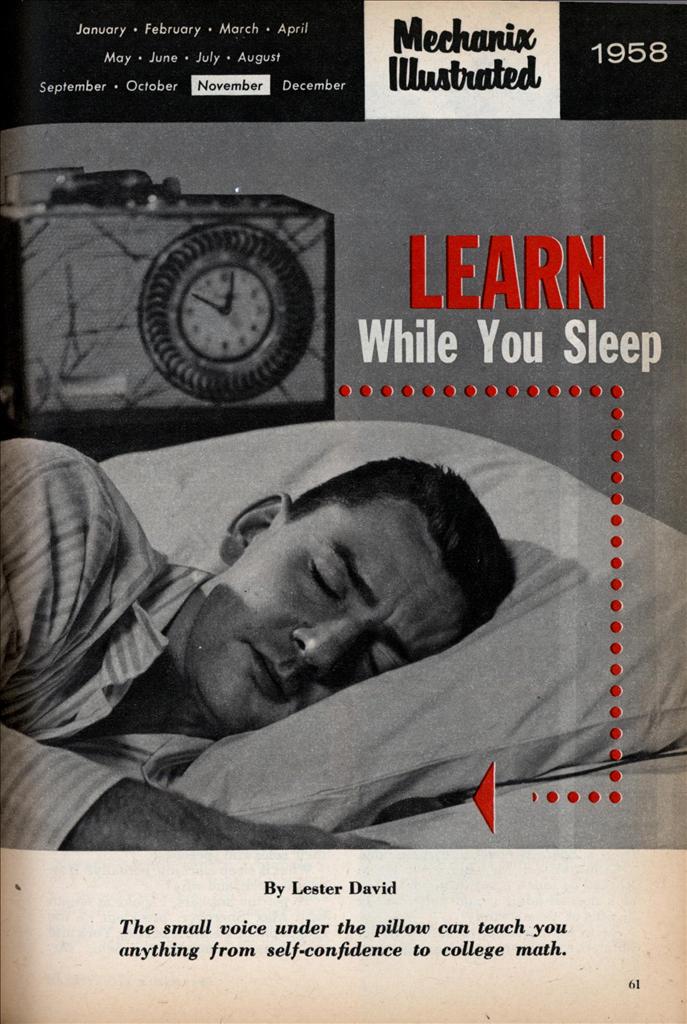 Learn While You Sleep

The small voice under the pillow can teach you anything from self-confidence to college math.

HELEN McGRATH was fast asleep. At her bedside was a tape recorder, quietly repeating words into her subconscious mind. You’d never mistake the scene for a classroom, yet it was exactly that. Because Helen McGrath was learning Spanish while she snoozed!

For six and a half hours that night, one lesson was played over and over again, words and phrases burrowing deep into her mind. On waking, Helen played the lesson through once again.

Miss McGrath, a skeptical newspaper reporter for the Vancouver Sun in Canada, was conducting a personal experiment to find out whether sleep learning actually works. With no prior knowledge of Spanish, she sleep-studied the language for seven nights. On the eighth day she lunched with Frank P. Bernard, Spanish vice-consul in Vancouver, to test how much she knew.

To her amazement, Miss McGrath began identifying things on the table—in Spanish! She found she could converse in Spanish, haltingly but understandably. She was even able to read bits from a Spanish novel and magazines.

Commented Mr. Bernard: Helen learned as much Spanish in that week as a normal adult would get from six months of serious study!

Helen’s experience, recounted in detail in her newspaper not long ago, may be astonishing but it does not stand alone. The startling fact is that sleep study is generating a powerful current of excitement among leading education authorities throughout this country and abroad. New experiments in the field are opening the eyes of eminent medical specialists and psychologists.

Here’s a capsule view of what’s happening: • Controlled tests in leading universities are showing that people can learn while asleep. Experiments prove that foreign languages can be mastered more rapidly if wide-awake study is supplemented by snooze-study.

• Psychologists are teaching patients to “unlearn” bad habits ranging from over-eating to speech defects. Many mothers have reported significant success in training youngsters to stop thumb-sucking, bed-wetting and nail-biting through recordings played while the children slept.

• TV actors, public speakers, ministers and opera singers are using sleep learning to become letter-perfect in their roles and speeches.

What is sleep learning, actually? How does it work, and why?

To get the answers, I spoke at length with Max Sherover, president of the Linguaphone Institute of New York and one of the pioneers in the field. Mr.

Sherover has coined the word “dormiphonics,” defining it as a “new scientific method that makes quick relaxed learning possible, awake or asleep.”

Dormiphonics, declares Mr. Sherover, works by “repeated concentrated impact of selected material on the conscious and subconscious mind.” His firm markets two types of special equipment for the purpose.

The first looks like an ordinary four-speed phonograph and, to a point, it’s just that. The machine spins commercially-prepared platters of anything the student wants to absorb but it has a special gizmo: there’s a built-in electric clock which can be set so that the machine will start playing a recording at any designated time, keep it going as long as the listener wishes and stop exactly when he wants. If he wants it to start up again a little later, that can be arranged too.

The second is a “memory trainer,” actually a tape recorder and playback device with automatic gadgetry attached. Here a student makes his own recording of anything he wants to learn—speech, sermon, vocabulary, fact, figures. There is the same clock setup through which he can play it back when he wishes. Both machines are equipped with under-pillow speakers which only the sleepers can hear.

A number of other firms are in the business of providing sleep learning equipment. The Ben Sweetland Systems, Inc., of San Francisco, Calif., markets a record player and a lecture course. The Sweet-land firm, which is opening branches all over the country, did $100,000 worth of business when it began only three years ago. “This year,” asserts 69-year-old Mr. Sweetland, “I’ll be disappointed if sales don’t exceed $1,000,000.”

In Los Angeles the American Sleep Teaching Association and the International Sleep Teaching Institute—formerly the Cambridge Institute- -report brisk sleep learning disc sales. In France, Jacques Genevay has just invented the Automatophone, a tape recorder which repeats a message over and over to a sleeper.

Sleep learning may sound mystical, even magical, but there’s a logical explanation for the phenomenon. Researchers long ago discovered that the human brain never stops working, even in sleep. Only recently, the Sleep Research Foundation reported, following scientific studies, that while most of the lines between consciousness and the outside world are disconnected during deep sleep, certain vital trunk lines are always plugged in. For example, a bone-tired mother in deep slumber will not stir as airplanes roar overhead and trucks rumble by outside. But if her baby coughs or cries out in distress—though the sound by comparison is almost inaudible—she wakens instantly.

The important point is that the brain is operative during sleep. The conscious mind shuts off but the subconscious portion does not. Time and again, people have gone to sleep with a problem on their minds, only to awaken and find it solved. It was the subconscious, working while the outer mind was sleeping.

The sleep teachers argue that this subconscious mind is thus receptive to foreign languages, facts, figures and even therapy.

One of the most dramatic experiments in sleep therapy is now underway in the Tulare County road camp near Visalia, Calif., where some 100 convicts have volunteered to act as guinea pigs.

As the prisoners go to sleep, a recording plays at regular volume for a short time, then is shut off. An hour later, when the men are in deep sleep, the recording goes on again, this time much lower. Each convict hears the voice through a separate earphone near or under his pillow.

The voice, low but insistent, keeps droning into the sleeping men’s subconscious: “Life is worth living wholeheartedly. . .

“Love shall rule your life. You shall love God, your family and others. You shall do unto others as you want others to do unto you. . .

“You shall have a major goal in life. You shall plan, carry out and attain that goal. You shall work and share with others. You shall grow in mind and spirit. You will attain self respect and maturity because you are good. . .

Already, 52 of the 100 prisoners have reported “substantial benefits” from the talks. One inmate told the superintendent that he always dreamed of liquor but “when I had the same dream last night it made me sick to my stomach.” Another declared that the treatments made him feel that “people are not down on me.” A third said the messages are enabling him to go to sleep “with a clean mind.”

Is sleep learning fully accepted? At this stage, the method is frankly controversial. As a new scientific tool, it is still too early to determine its ultimate value. A number of fairly wild claims are being made by a few promoters, stirring the watchful interest of the Federal Trade Commission.

Nevertheless, the method is attracting increasing numbers of rabid adherents. The Wall St. Journal reports that already 100,000 persons throughout the country are enrolled in sleep-study courses.

Besides learning languages, they are building vocabularies, correcting speech defects, memorizing sermons, learning the Morse Code, getting sales pitches down pat and heeding all kinds of suggestions calculated to develop and improve their personalities. They are listening to records designed to cure insomnia, claustrophobia, fear of darkness, shyness and the cigarette and liquor habits. A whole new industry is arising, providing records and special equipment for the sleep learners.

More evidence is needed, of course, before the final score on this new educational tool can be properly assayed but if it fulfills its early promises the prospects are dazzling, to say the least.

Technological progress is proceeding at a bewilderingly rapid pace. In the past 20 years, man has piled up more complex lore than the world accumulated in the preceding thousand of years.

There are just so many hours in the day during which we can cram all this learning into our heads. Man has to sleep sometimes. But man might well be able to use that time, not only to refresh his body, but to amass more knowledge, more information, more skills. And in the most painless possible way!