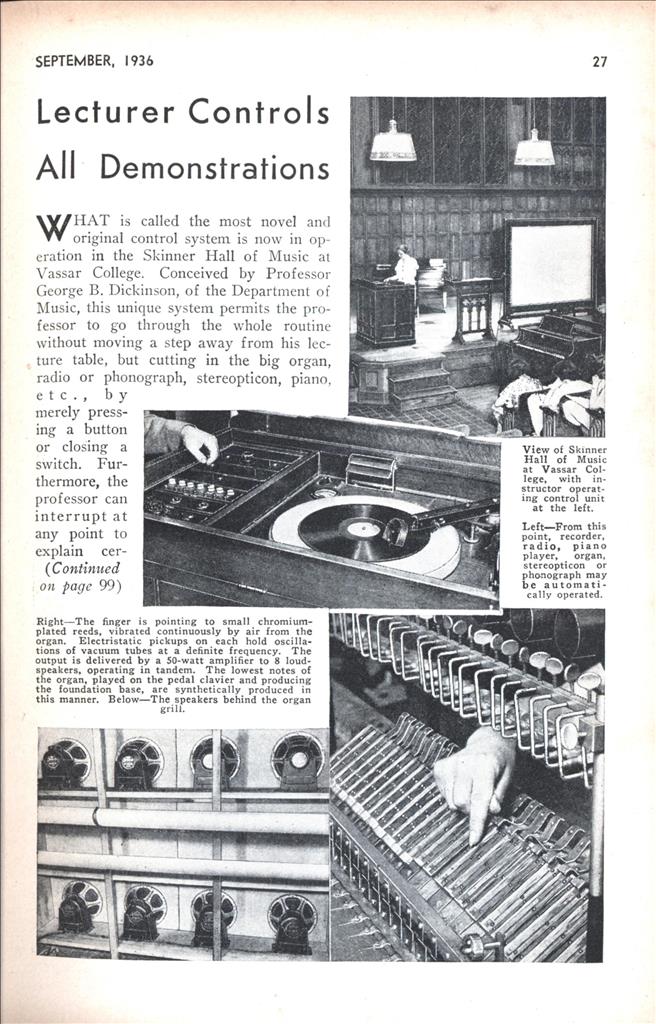 WHAT is called the most novel and original control system is now in operation in the Skinner Hall of Music at Vassar College. Conceived by Professor George B. Dickinson, of the Department of Music, this unique system permits the professor to go through the whole routine without moving a step away from his lecture table, but cutting in the big organ, radio or phonograph, stereopticon, piano, etc., by merely pressing a button or closing a switch. Furthermore, the professor can interrupt at any point to explain certain things in detail, or can repeat any part of, or all, of the previous routine at will. For instance, if one of Wagner’s compositions is being played on the phonograph, and has reached a point where some explanatory remarks are necessary, the professor pushes a switch, which automatically raises the reproducing arm and holds it at that exact point, off the record, which meanwhile continues to revolve. After the necessary comment, the Professor again throws the switch, and the needle engages at the same point on the record as before the interruption. The same thing applies to the magnificent new pipe organ, which, in addition to its regular keyboards, is operated by music rolls, as are also the grand pianos. Pushing a switch turns out the lights and starts the stereopticon, which automatically projects and changes all or any part of 52 lantern slides.

Perhaps one of the most unusual features of this novel system is the synthetic section of the big pipe organ. Although this is of most modern design, with thousands of pipes, it was found that the design of the building did not permit the installation of its giant 32-foot pipes, which are so essential in organ music. Vibrating reeds, vacuum-tube oscillators, and loudspeakers completely solved this problem.