Legs Of Ducks Transplanted On Chickens Before Hatched (Dec, 1939)

Would this really work? 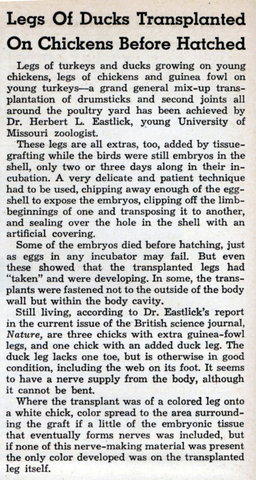 Legs Of Ducks Transplanted On Chickens Before Hatched

Legs of turkeys and ducks growing on young chickens, legs of chickens and guinea fowl on young turkeysâ€”a grand general mix-up transplantation of drumsticks and second joints all around the poultry yard has been achieved by Dr. Herbert L. Eastlick, young University of Missouri zoologist.

These legs are all extras, too, added by tissue-grafting while the birds were still embryos in the shell, only two or three days along in their incubation. A very delicate and patient technique had to be used, chipping away enough of the eggshell to expose the embryos, clipping off the limb-beginnings of one and transposing it to another, and sealing over the hole in the shell with an artificial covering.

Some of the embryos died before hatching, just as eggs in any incubator may fail. But even these showed that the transplanted legs had “taken” and were developing. In some, the transplants were fastened not to the outside of the body wall but within the body cavity.

Still living, according to Dr. Eastlick’s report in the current issue of the British science journal, Nature, are three chicks with extra guinea-fowl legs, and one chick with an added duck leg. The duck leg lacks one toe, but is otherwise in good condition, including the web on its foot. It seems to have a nerve supply from the body, although it cannot be bent.

Where the transplant was of a colored leg onto a white chick, color spread to the area surrounding the graft if a little of the embryonic tissue that eventually forms nerves was included, but if none of this nerve-making material was present the only color developed was on the transplanted leg itself.