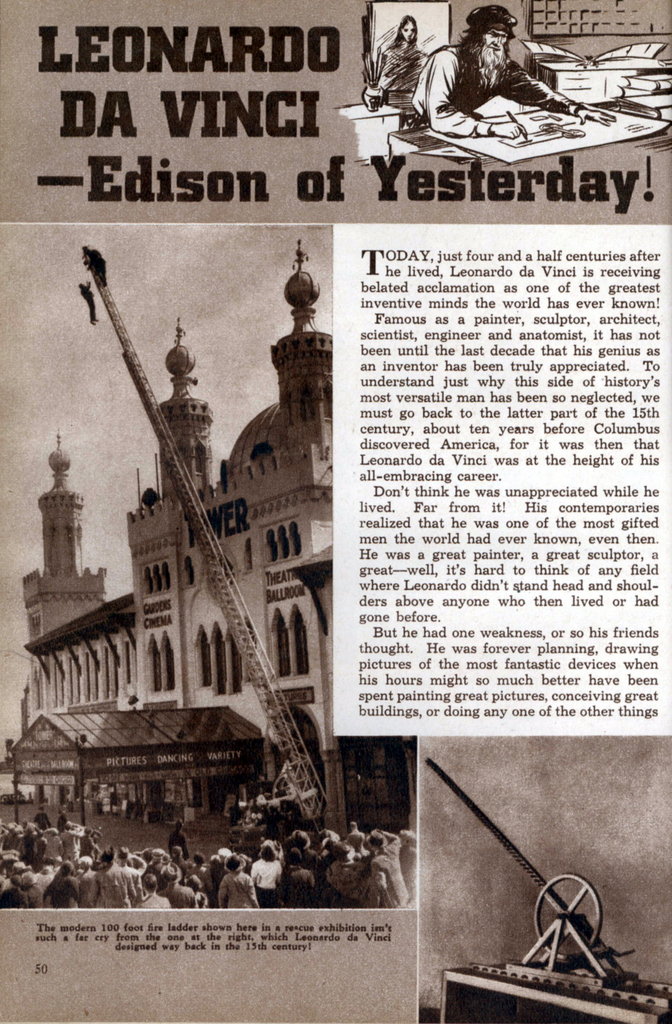 Don’t think he was unappreciated while he lived. Far from it! His contemporaries realized that he was one of the most gifted men the world had ever known, even then. He was a great painter, a great sculptor, a greatâ€”well, it’s hard to think of any field where Leonardo didn’t stand head and shoulders above anyone who then lived or had gone before.

But he had one weakness, or so his friends thought. He was forever planning, drawing pictures of the most fantastic devices when his hours might so much better have been spent painting great pictures, conceiving great buildings, or doing any one of the other thingsn he could do so much better than anyone else. His friends begrudged him the valuable time he “wasted” planning such things as a machine that would enable man to fly, a boat that would stay under water, and other things equally fantastic.

Today we know that had Leonardo left behind him any one with zeal and knowledge enough to extract from the mass of his manuscripts some portion of his inventive ideas and give them to the world, civilization would have been given an incalculable impetus.

As it was, these studies of Leonardo’s seemed to his followers and biographers merely his whims and fancies, things to be spoken of slightingly and with apology. The manuscripts, with the single exception of a few relating to painting, lay unheeded and unknown, some even destroyed, until the present generation.

In recent years a great body of scholars and editors have been engaged in giving to the world the texts of Leonardo’s existing manuscripts and searching for the lost ones. The culmination of their efforts is the present Leonardo da Vinci Exhibition, from May 9 to September 30 this year, in Milan, Italy. This exhibition presents a complete review of the immense and many-sided activities of the great Renaisance painter and scientist. Paintings, drawings, and manuscripts have been lent to the exhibition by Italian and foreign museums, and by private collectors.

The exhibition comprises twenty sections devoted to the most important activities of Leonardo and includes painting, sculpture, engineering, military and civil mechanics, hydraulics, physics, astronomy, and aeronautics. The feature of the exhibition is the display of the machines designed by Leonardo in which the closest interpretation. of the original drawings has been realized.

The working models, some of which are shown on these pages, have been reconstructed according to 15th century technical means and even the raw materials used are those that were presumably available to artisans of the 14th and 15th centuries. The machines are shown side by side with the original designs and with explanatory matter in every case. Plaster casts, tracings, and photographs of his studies in anatomy, architecture, and military art are also displayed.

History tells of no man gifted in the same degree as Leonardo was for both art and science. In art he was an inheritor and per-fector, born in a day of great and many-sided endeavors on which he put the crown, surpassing both predecessors and contemporaries. In science, on the other hand, he was a pioneer, working wholly for the future, and for the most part, alone. In science he was the first among modern men to set as a goal for himself most of the problems which searchers of later generations have labored to solve. A century before Bacon he showed a firmer grasp of the principles of experimental science than Bacon showed, fortified by a far wider range of actual experiment and observation.

Galileo, Bacon, Newton, Harvey, the Wright brothersâ€”he knew what each of them would some day discover! He was the forerunner of Watts; only he meant steam to project a missile from a cannon. Experts say that had he had some power like gasoline at his disposal he would have completed his aviation experiments. He knew a method of remaining for a long time under water, but he refused to tell of it because of the “evil nature of man.”

Among the 200 working models of inventions at the present exhibition are a machine for grinding curved mirrors, a machine for drawing copper wires, an oil press, a double spindle screw-cutter, a printing press (pre-dating similar presses preserved in the Gutenberg museum by about 150 years!), a boring and polishing machine for cylinders, and, perhaps most astonishing of all, a model of the principle of automatic gearsâ€”the same principle of which is incorporated in the differentials of modern automobiles!

One of the most interesting phases of Leonardo’s inventive mind is shown by the devices he designed for military use. He introduced a steam gun, the barrel of which rested for about a third of its length in a bed of hot coals. When heated, the expansion of the barrel loosened a screw which caused water to flow from a cistern onto the heated portion, the resulting steam driving out the cannon-ball “with a great noise and fury.”

He also introduced a breech-loading cannon, a double-hulled boat (the modern counterpart is the anti-torpedo bulge on naval vessels), and several multiple-barreled cannons.

This, then, was Leonardo da Vinci the inventor â€”ardently feeling his way in the work of experimental study and observation in every branch of theoretical or applied science in which any beginning had been made in his age as well as in some in which he was the first pioneer. He was full of new ideas concerning both the laws and the applications of mechanical forces. His architectural and engineering projects were of a daring which amazed his contemporaries, while his inventions are today amazing people of this, the twentieth century!

History presents few figures more attractive to the mind’s eye than Leonardo da Vinciâ€”the most versatile genius the world has ever known!