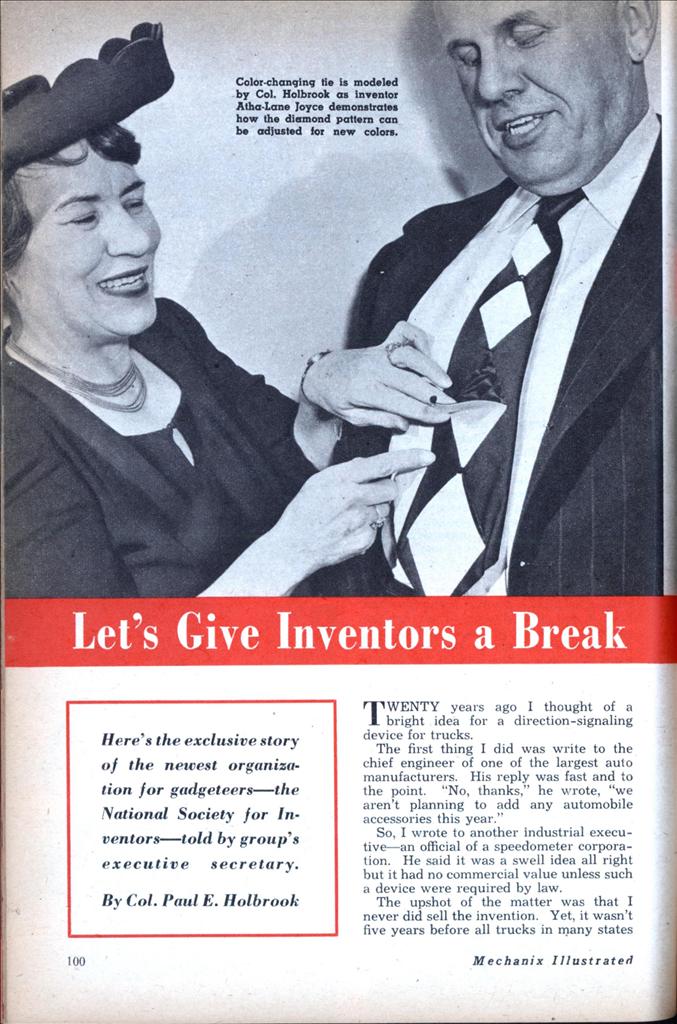 Let’s Give Inventors a Break

Here’s the exclusive story of the newest organization for gadgeteers—the National Society for Inventors—told by group’s executive secretary.

TWENTY years ago I thought of a bright idea for a direction-signaling device for trucks.

The first thing I did was write to the chief engineer of one of the largest auto manufacturers. His reply was fast and to the point. “No, thanks,” he wrote, “we aren’t planning to add any automobile accessories this year.”

So, I wrote to another industrial executive—an official of a speedometer corporation. He said it was a swell idea all right but it had no commercial value unless such a device were required by law.

The upshot of the matter was that I never did sell the invention. Yet, it wasn’t five years before all trucks in many states were required by law to carry direction arrows!

That was when I decided that if I ever got the chance, I would organize a national cooperative society in the interests of inventors like myself. And that chance did come when I retired from the Army in 1948 and helped form the National Society of Inventors, Inc.

It marks the first time a private organization for and by inventors has ever been developed to guide, foster and protect the inventor’s own ideas. And it’s strictly a non-profit organization, too.

Just what are we trying to do? Well, as a group of independent inventors we want to foster a high standard of ethics among fellow inventors. And we also want to promote better understanding among inventors, industry and the government.

Too many inventors are doing nothing with their ideas or fail to profit from them because of inability to market them properly. Up till now the inventor has had to fend for himself among all the other organized groups and corporations. The National Society of Inventors will do much of the contact work for him.

Who belongs to our organization? Just about every occupational strata is represented. Head of the N. S. I. Board of Directors is Walter H. Campbell of Arlington, Va., who serves on the National Se- curity Resources Board. He has invented an electrical drop signal. Then there’s Louis Paraskevas, a waiter at a Washington hotel, who has patented a non-skid steel grip for auto tires. Another member, Captain Edward Trist, a retired British naval officer, has invented a new auto tire chain.

The ladies are joining up, too. Miss Atha-Lane Joyce has a patent ‘ on a fabric which can change color while being worn. It consists of individual pieces in any desired shape, sewn or fastened together with .different colors on each side. Small flaps are held in place by invisible fasteners. By folding back any given number of flaps, the design and color may be changed. This new fabric could be used for draperies, curtains, upholstery and ties. Miss Joyce has also invented other types of unusual and changeable fabrics. One is a street dress that changes into an evening gown by pulling a string. Then there’s a dinner dress with a concealed rubber tube in the sash. When the wearer wants a bustle she merely blows up the tube!

Mrs. Lillian L. Abrahams, another member, has a rubber tip for children’s shoes which saves on wear and tear as well as on repair bills. A scale for centering manuscripts and transposing elite type to pica is the invention of Miss Leona M. Lenneman. And still another female—Mrs. Evelyn Logan—has patented a self-serving table with a revolving deck to hold the next course and space to stow the soiled dishes.

Some N. S. I. members have a number of inventions to their credit already. John H. Dawson of Rockville, Md., for instance, is the holder of eight patents with six more pending. His brain children include a hot-dog fork and a kitchen knife with a guard.

Lewis H. Renshaw is a successful inventor already. His stove has an oven which slides up to an easy working level.

Possibly the most misunderstood person in our society is the inventor—he’s often ridiculed and rebuffed when he’s not merely disregarded. Sometimes he lacks the stamina to withstand these obstacles. That’s where the National Society of Inventors comes in.

Our job is to help the inventor in any way possible. Among the definite projects planned are:

1. A legislative program designed to impress Congress with the problems of the part-time inventor, including a drive to abolish taxes for a certain period of time on royalties from new inventions.
2. Formation of a watchdog agency to protect the inventor and his inventions from unscrupulous individuals.
3. Establishment of a clearing house of information so that industry will have readily accessible a central source of information about patents and products available for sale or manufacture.
4. Creation of our own facilities for research activity by Society members.
5. Publication of periodicals dedicated to the advancement of our aims.
6. Establishment of a central file with data on each inventor and invention to be disclosed only with the written permission of the inventor to any individual or organization he specifies.
7. Setting up of a placement service which will actively help members find manufacturers, sponsors and distributors.

If you’ve ever had the inventive spark, you’ve realized how important these things can be to inventors. They’ve been getting the runaround for so long that the only alternative for the independent inventor is to join up with others like himself and work together. I am convinced that when our National Society of Inventors really starts rolling it’ll prove of enormous aid to the little inventor. Already he’s beginning to query us about it for word has gotten around fast and our mail at Box 7410, Benjamin Franklin Station, Washington 4, D. C., is increasing every day.

Let’s not forget that the independent inventor is to a great extent responsible for our country’s strength today. And let’s ,also keep in mind that our very survival may depend upon our ability to understand and nurture that talent of inventiveness. So, let’s give inventors a break and we’ll be giving ourselves one at the same time!