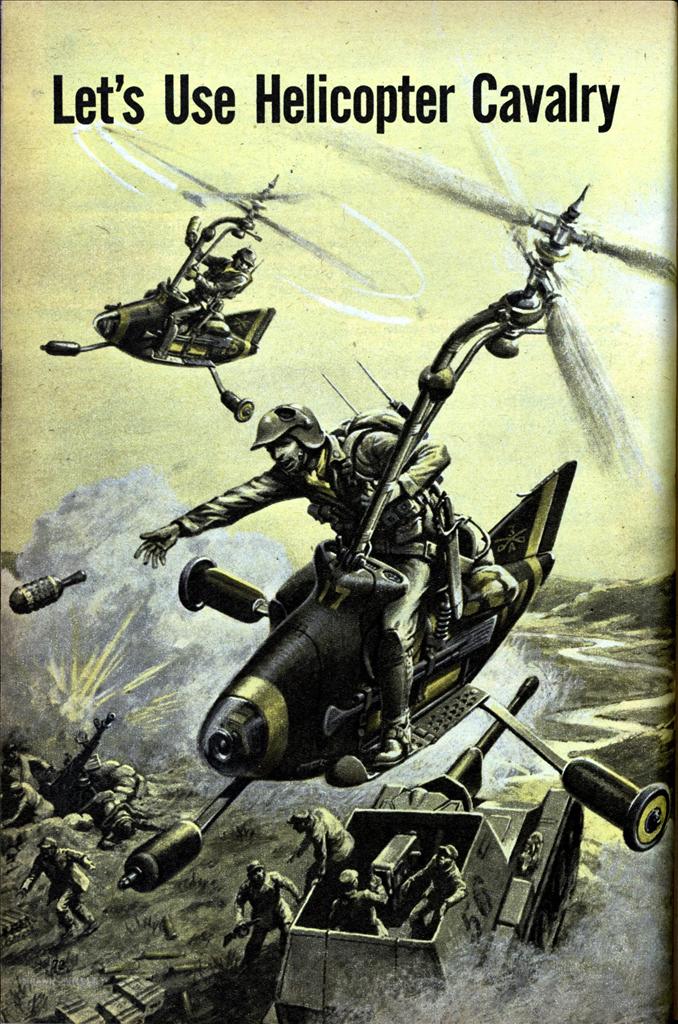 SCATTERED along the western slope of the Asiatic coastal range, the copter troopers and their mounts cluster in little groups as the rising sun climbs behind them. The jump-off moment is fast approaching. Within minutes, the sun will burst blindingly above them to cover their westward assault.

The first elements of the blitz landing—submarine-borne marines —had hit the enemy coast only three days ago, seized the controlling crests and passes of the coastal hills in bloody fighting, well covered by massive flights of water-borne jet fighters.

On the second day, the supporting units of army troops arrived. They came in widely dispersed waves of huge, A-powered flying-boats that landed beyond the breakers and nosed ashore to land men, machines and supplies. This was an almost undetectable operation, stretching along a hundred miles or more of shoreline like a thin but strong garrotting cord. Nowhere was there a great enough concentration to draw an I enemy A-bomb. Toward the center of the invasion sector, a narrow valley traversed the mountainous country in a westerly direction, forming a winding corridor toward the industrial and agricultural heart of the area. Late yesterday afternoon, newly landed tank columns started up the valley and bogged down immediately under hilltop artillery fire. But a new element has entered the picture since the Italian campaign of World War II. The old horse cavalry has been reactivated recently and is now available, mounted on swift, one-man helicopters. The well-dispersed brigade has been in constant radio-telephone communication and as the zero hour draws near, commands begin to crackle along the mountainsides. “Check your revs. . . Prepare for take-off!” Starting rockets twinkle in tight circles as the blast of hundreds of tiny ramjets settles into a sustained roar.

Like a swarm of wasps, the troops assemble in midair, fall into the prescribed formation and high-ball for their objectives. Skimming over hill-tops, through gaps .and along narrow gorges, the agile copters take advantage of every possible cover. Although the flying is dangerous, ground-hugging keeps them below the zone of radar detection and enables them to burst upon ground positions in full force.

Like Indians galloping around a beleaguered wagon train, the cavalrymen circle their hilltop prey. In moments, the battery is a hell of pinging bullets, bursting grenades and flaming napalm. As soon as the position is secured, re- ports go over the air, fresh fuel and ammo arrive and the platoon settles down to guard the peak. Dust rises from the valley as the advance guard of tanks rolls forward.

If all this sounds a bit fanciful, please remember that this description of air cavalry action includes nothing that the helicopter has not already done a thousand times. And for a long time now, army and marine teams have been developing combat copter tactics and are currently testing machines that range from single-seaters to big boys capable of carrying a whole platoon.

In January of this year the Pentagon established a new Army Aviation Division under Brig. Gen. Hamilton H. Howze. Howze is particularly well qualified for the job. A West Pointer, he served for years as a horse soldier in the 3rd, 6th and 7th cavalry regiments. He served as Tank Battalion, Armored Regiment and Combat Command Commander of the First Armored Division in WW II. In 1951 he won his jump badge as a paratrooper.

When the last of the horse cavalry was disbanded in 1944, a serious gap was left in the ground force combat teams. The troopers had served as the “eyes of the army,” providing the detailed information that enabled an infantry commander to make sound decisions. Hard experience in World War II soon demonstrated that road-bound tanks and armored cars were just not up to the job. A new concept would call for the replacement of the tank company by a flying cavalry squadron of sufficient strength to cover the enlarged fronts and guard against in- . filtration of its rear areas.

The Army will not discuss its plans for new types of units but it is logical to assume that they must soon organize aerial cavalry units to regain the necessary mobility of their reconnaissance and screening elements.

“Jumping Jim” Gavin of wartime paratroop fame, who was recently promoted to Lieutenant General and named Deputy Chief of Staff for Plans and Research, is one of the principal proponents of aerial cavalry. A veteran of air-ground combat, he well realizes the need for helicopter cavalry.

So does Major General Paul D. Adams, the army’s Acting Assistant Chief of Staff, G-3. Having personally experienced the difficulties of relying only on mechanized reconnaissance in Italian and Korean mountain country, he is sold on helitroopers as advance and flank guards for roadbound armor. “The new copter-mounted troops could function precisely as did the horse troops in the Civil War,” says Gen. Adams, “with the added advantage of flight. Jeb Stuart would have loved to do it this way!”

No helicopter proposed to date seems to meet the requirements of a practical cavalry mount. Mechanix Illustrated has, therefore, come up with what it believes to be the first military “helicycle” designed from scratch to carry the new aerial trooper. The ramjet-driven, four-bladed, coaxial rotor shown possesses several advantages for. the small copter. First, its small overall diameter permits tighter formation flying and easier concealment on the ground.

It also eliminates the awkward tail-rotor or boom-supported rudder. The lifting rotors are separate, two-bladed units, turning in opposite directions to neutralize torque. In the event of damage to an individual blade, it and its twin can be jettisoned simultaneously, instantly stopping the destructive vibration which can soon wreck a helicopter. This leaves the trooper with one completely balanced rotor with which to limp to safety. For field or storage use the four blades fold downward forming a conical frame over which a tepeelike shelter can be spread. In addition to providing a tent for the trooper, this also acts as a tie-down for the copter.

Unlike conventional chair-type copters, the MI Helicycle employs the straddle seating of a horse or motorcycle. This, we believe to be the firmest, most comfortable and least exhausting posture for a small military copter. It en- ables the trooper to hang on like a leech during the wildest rough-air gyrations. Although a safety belt is provided, he is not completely at its mercy as he would be in a chair seat.

The saddle combines the safety and comfort features of a stock saddle and the bucket seat. With his tail confined -by the high cantle, his thighs anchored firmly beneath the bucking swells of the pommel and his feet in the capped stirrups on the running boards it’s hard to shake the trooper loose.

The saddle shell is moulded of light Doron armor (see June 1952 MI) to protect against small arms fire from the ground. Its side flaps are of flexible plastic and the seat may be padded with foam rubber if desired. To permit emergency transportation of an infantryman or a grounded fellow trooper, passengers can be carried on the flat packed cantle roll behind the saddle. This roll contains the camouflaged tent-cover, blankets, spare clothes, etc., and is secured to the frame with straps. A grab rail with eyes for fastening an extra safety belt is provided behind the cantle.

The main frame of the Helicycle is welded magnesium tubing, rounded on top to accommodate the saddle and fitted with three spring steel landing legs bolted to the bottom. Inside the frame is a removable fuel tank of Fiberglas, lined with puncture-proof, self-sealing compound. A moulded Fiberglas nose cone and fairing streamline the forward end of the machine and provide stowage space. The hinged cone tilts up for access and contains a battery-operated spotlight for night landings. This is removable for ground use.

A similar tail cone contains the personal gear, spare rations, ammo, etc., formerly carried in the saddlebags. Atop it is a tail fin and hand operated trim tab for maintaining directional stability. The rotor pylon is also adjustable fore and aft to compensate for the changed center of gravity when carrying an emergency passenger.

Flight instruments—compass, altimeter and air speed indicator—are mounted in the broad flat top of the saddle pommel. A tachometer mounted beneath the rotor head, is directly connected to the rotors.

A set of light, auxiliary floats converts our Helicycle into an amphibion. Fastened to the flat bottom of the frame is – the main float, faired to streamline the copter’s belly in flight. Three cylindrical “outrigger” floats fit over the ends of the landing legs to balance the machine on the water.

The rifle or submachine gun, is fastened by quick-release clips to the Helicycle frame in a horizontal position beneath the trooper’s right leg. Fitted with a large capacity mounted magazine, it can be fired in flight like a fixed machine gun. On the left side of the frame, is a folding magnesium paddle— standard liferaft type—for water maneuvering with dead engines. Armored flak-jackets and helmets will be worn during combat. Radio phones attached to the combat pack provide voice communication. Earphones and mikes are mounted in the helmet.

Thus mounted and equipped, we have air-borne troopers capable of rapid, fluid movement over all kinds of terrain. They are able to skim large areas in extended formations or drop down in squads and platoons for surface check and interrogation. Organized in troops, squadrons and regiments, backed by larger squad copters carrying mortar crews, recoilless gun teams, rocket projectors, engineer and demolition squads, etc.—much like the “flying artillery” of Civil War fame—these formidably armed units should prove invaluable in screening, holding, covering, raiding and all sorts of special hit-and-run operations.

In addition, they perform the classic cavalry function of detailed reconnaissance faster and more completely than any existing unit. In short, the airborne trooper promises to resurrect the army’s long lost eyes and ears, to revive the old light horse cavalry on modern, sky-busting steeds, swifter and more dashing than any thoroughbred of old.