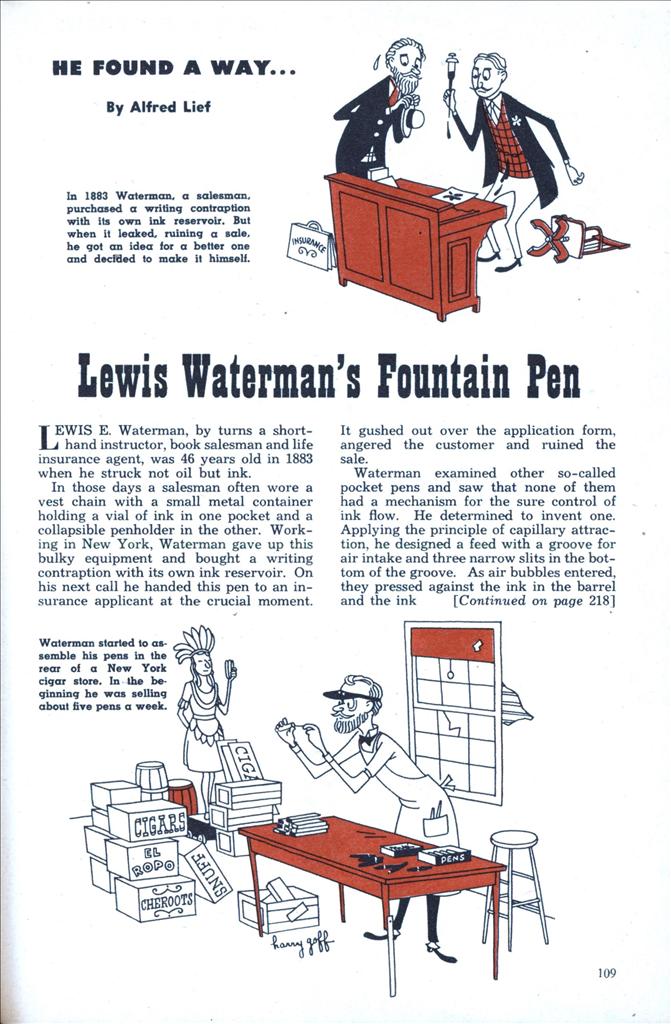 HE FOUND A WAY…

LEWIS E. Waterman, by turns a short-hand instructor, book salesman and life insurance agent, was 46 years old in 1883 when he struck not oil but ink.

In those days a salesman often wore a vest chain with a small metal container holding a vial of ink in one pocket and a collapsible penholder in the other. Working in New York, Waterman gave up this bulky equipment and bought a writing contraption with its own ink reservoir. On his next call he handed this pen to an insurance applicant at the crucial moment.

It gushed out over the application form, angered the customer and ruined the sale.

Waterman examined other so-called pocket pens and saw that none of them had a mechanism for the sure control of ink flow. He determined to invent one. Applying the principle of capillary attraction, he designed a feed with a groove for air intake and three narrow slits in the bottom of the groove. As air bubbles entered, they pressed against the ink in the barrel and the ink descended through the slits in a uniform flow to the pen point.

This device was so novel the Patent Office granted a patent in 1884, only a few months after the filing. Waterman claimed that his new mechanism would “prevent the excessive discharge of the ink when the pen is in use.” It was the first practical fountain pen and its three-fissure feed became the standard principle for all other makes produced thereafter.

Waterman started assembling his pens on a kitchen table in the rear of a cigar store at the corner of Fulton and Nassau Streets. The vulcanized rubber parts were made for him by a factory in Seymour, Conn, (which he later took over) and the gold nibs with iridium tips were bought in the open market since these were available for ordinary dip pens. In the beginning he sold four or five pens a week.

He collected testimonials: “It never soils the fingers.” “It is always ready, without pounding and shaking.” He called his business The Ideal Pen Co. and moved into a shop on lower Broadway. In the fall of 1885 he started to advertise. After that Waterman’s Ideal rode the road to fortune.

The first pens were long tubes with a cap fitting on a projection at the top of the barrel. The cone cap, sliding over the end, did not come until 1899. Meantime the barrel went through several changes in appearance with an engine-turned finish, a cable twist, gold band and a hexagonal shape. Waterman introduced a desk pen model as early as 1890 and two years later gave the cap a tapered end. Color was first used in 1898 with the hexagon holder.

After L. E. Waterman died in 1901, having popularized the phrase “the daddy of them all,” his nephew Frank D. Waterman became president of the firm. New conveniences were added. A piston for self-filling in 1903 disposed of the bother of reloading ink with an eye dropper.

The problem of filling persisted. In a 1908 model the barrel was made with a movable sleeve which exposed a metal bar; by finger pressure the bar squeezed a soft rubber sac. Up to this time there had been no sacs in fountain pens.

But the sleeve was not as simple as the “coin self-filler,” in 1913, which had a slot big enough to admit the edge of a coin to compress the sac. Later the same year the lever appeared, set in a metal housing attached to the barrel; the lever emptied or filled the sac completely in one stroke.

Changes since that time have been mainly in styling, the adoption of plastic in place of vulcanized rubber and variations in size responding to the public’s interest or lack of interest in larger ink capacity. A basic advance in construction was an improved feed in 1933 permitting the tip of the point to be dipped into an ink bottle only as far as the vent hole.

Today the business of Waterman Pen Co. is headed by Frank D. Waterman, Jr., who succeeded his father in 1938. It’s still in the family. Although a mere accident blotted out old L. E. Waterman’s career as an insurance solicitor 71 years ago, his fame and his invention flow on.