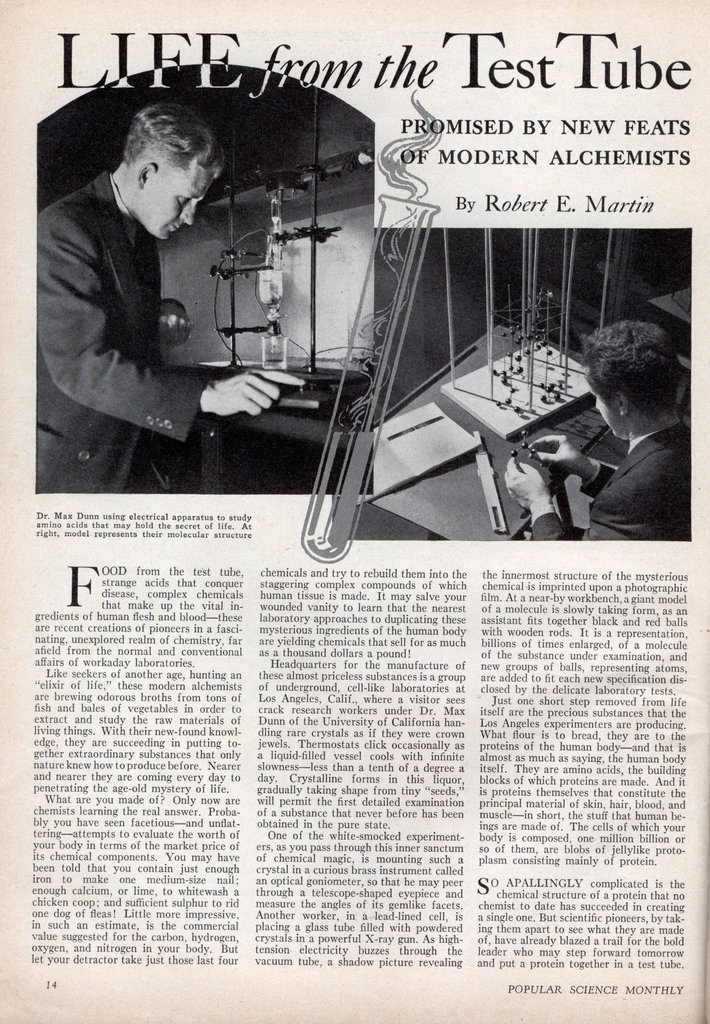 FOOD from the test tube, strange acids that conquer disease, complex chemicals that make up the vital ingredients of human flesh and bloodâ€”these are recent creations of pioneers in a fascinating, unexplored realm of chemistry, far afield from the normal and conventional affairs of workaday laboratories.

Like seekers of another age, hunting an “elixir of life,” these modern alchemists are brewing odorous broths from tons of fish and bales of vegetables in order to extract and study the raw materials of living things. With their new-found knowledge, they are succeeding in putting together extraordinary substances that only nature knew how to produce before. Nearer and nearer they are coming every day to penetrating the age-old mystery of life.

What are you made of? Only now are chemists learning the real answer. Probably you have seen facetiousâ€”and unflatteringâ€”attempts to evaluate the worth of your body in terms of the market price of its chemical components. You may have been told that you contain just enough iron to make one medium-size nail; enough calcium, or lime, to whitewash a chicken coop; and sufficient sulphur to rid one dog of fleas! Little more impressive, in such an estimate, is the commercial value suggested for the carbon, hydrogen, oxygen, and nitrogen in your body. But let your detractor take just those last four chemicals and try to rebuild them into the staggering complex compounds of which human tissue is made. It may salve your wounded vanity to learn that the nearest laboratory approaches to duplicating these mysterious ingredients of the human body are yielding chemicals that sell for as much as a thousand dollars a pound!

Headquarters for the manufacture of these almost priceless substances is a group of underground, cell-like laboratories at Los Angeles, Calif., where a visitor sees crack research workers under Dr. Max Dunn of the University of California handling rare crystals as if they were crown jewels. Thermostats click occasionally as a liquid-filled vessel cools with infinite slownessâ€”less than a tenth of a degree a day. Crystalline forms in this liquor, gradually taking shape from tiny “seeds,” will permit the first detailed examination of a substance that never before has been obtained in the pure state.

One of the white-smocked experimenters, as you pass through this inner sanctum of chemical magic, is mounting such a crystal in a curious brass instrument called an optical goniometer, so that he may peer through a telescope-shaped eyepiece and measure the angles of its gemlike facets. Another worker, in a lead-lined cell, is placing a glass tube filled with powdered crystals in a powerful X-ray gun. As high-tension electricity buzzes through the vacuum tube, a shadow picture revealing the innermost structure of the mysterious chemical is imprinted upon a photographic film. At a near-by workbench, a giant model of a molecule is slowly taking form, as an assistant fits together black and red balls with wooden rods. It is a representation, billions of times enlarged, of a molecule of the substance under examination, and new groups of balls, representing atoms, are added to fit each new specification disclosed by the delicate laboratory tests.

Just one short step removed from life itself are the precious substances that the Los Angeles experimenters are producing. What flour is to bread, they are to the proteins of the human bodyâ€”and that is almost as much as saying, the human body itself. They are amino acids, the building blocks of which proteins are made. And it is proteins themselves that constitute the principal material of skin, hair, blood, and muscleâ€”in short, the stuff that human beings are made of. The cells of which your body is composed, one million billion or so of them, are blobs of jellylike protoplasm consisting mainly of protein.

SO APALLINGLY complicated is the chemical structure of a protein that no chemist to date has succeeded in creating a single one. But scientific pioneers, by taking them apart to see what they are made of, have already blazed a trail for the bold leader who may step forward tomorrow and put a protein together in a test tube.

Strange things, seemingly more in keeping with a sorcerer’s den than a modern laboratory, went into the retorts of these research workersâ€”squash seeds and fish entrails, hen’s eggs and wheat, horsehair and goose feathers. With boiling acid, experimenters gave them a chemical “third degree” to try to break them down into simpler substances. What they obtained were near-proteins that they named amino acidsâ€”the queer name signifying, to a chemist, the distinctive character of the nitrogen compounds they contain. Were these newly isolated substances the long-sought chemical “missing link” between the realms of inert and living matter?

FURTHER tests showed that they were. A molecule of protein such as is found in living matter, X-ray analysis indicated, is a complicated network or chain of these amino-acid molecules. By linking different kinds of amino acids together in various patterns, millions of kinds of proteins are theoretically possibleâ€”far more, in fact, than all the known species of plants and animals on the globe and therefore plenty to account for nature’s infinite variety. So vital to life are these “missing-link”

chemicals known as amino acids that all animals, man included, would quickly perish if deprived of a constant supply. Yet plants alone, in nature, possess the power of manufacturing them from simple materials. Drawing up nitrates from the soil, the plants combine nitrogen from these compounds with carbon dioxide and water to form amino acids, which in turn are built into the different plant proteins.

Animals, unable to duplicate this feat, must feed either on plants or upon other animals that are vegetarians to obtain the amino acids that are essential to their existence. When you eat proteins of plant or animal origin, the digestive fluids break them down at once into their constituent amino acids. The blood stream distributes these to the tissues of the body, where they are rebuilt into the characteristic animal proteins of the particular tissues. Thus they help build up new cells to replace the ones that are constantly broken down by the wear and tear of life processes. An- other vital role is played by these mysterious acids in the production of the hormones, or chemical messengers, that speed through the body to regulate growth, fat-building, and other functions. One thousandth of an ounce of an amino acid called thyroxin, concentrated in the thyroid gland, separates every normal human being from imbecility or death.

No wonder, then, that chemists have eagerly set out to discover the true nature of these all-important chemicals. To date, some twenty-two different amino acids have been found and named. Chemists have learned to draw complex formulas for them, as an engineer draws plans for a bridge. Manyâ€”including thyroxinâ€”have actually been created in the laboratory. Others are being isolated and purified from natural proteins, like white of egg, gelatin, and casein. Dr. Dunn’s laboratory is a miniature factory, producing them as needed by other research laboratories where their remarkable properties are being disclosed.

One of the “missing-link” chemicals, named cystine, has been found to have a startling effect on the growth of hair. Sheep, fed with it, produce abundant wool of superior quality.

A compound of another, called d-glutamic acid, flavors food with a meatlike taste. Millions of dollars’ worth of this acid is sold each year to people in the Orient who like meat but are forbidden by their religion to eat it.

Daily administrations of a few grams of a third, named glycine, have been found to aid in curing myasthenia gravis, a strange malady producing muscular weakness.

Most spectacular, however, of the by-products of the search for the chemical secret of life is the production of synthetic food.

Scientists have dreamed of producing artificial “food pills” that would contain everything necessary for lifeâ€”a feat that would render man forever independent of natural resources for his nourishment, and banish fear of crop failure and famine. Now, as every one knows, human food consists of three main ingredientsâ€”fats, carbohydrates, and proteins. Can the chemist put this concoction together?

Synthetic fats from petroleum are an accomplished fact. One such product, called “intarvin,” has actually been used as a part of a diet for diabetics.

Carbohydrates, such as starch and sugar, offer the chemist a more difficult task. Nevertheless, a British experimenter, Prof. E. C. C. Baly of the University of Liverpool, was able to thrill the world of science a few years ago with the announcement that he had made them from carbon dioxide, the gas that is produced by burning carbon; a common mineral salt, potassium nitrate; and water! By treating these simple materials with ultra-violet light, he first produced a sugar closely related to, if not identical with, ordinary glucose or grape sugar. Other sugars and starches followed, so that today the artificial manufacture of these carbohydrates is perfectly feasible.

PROTEINS remained the stumbling block. Until now, experimenters trying out man-made food on laboratory animals have had to supplement the diet with a little natural meat or meat juice, or their charges would slowly starve to death. Would synthetic amino acids, which the animals themselves could transform into the needed proteins, fill the deficiency?

For months, University of Illinois research workers tried out one after another of these artificial protein-forming chemicals on white ratsâ€”and recorded failure after failure. Even when as many as seventeen synthetic acids had been compounded and supplied in the diet, to replace the natural protein of which the rats were deprived, some vital ingredient still seemed to be lacking. Then the experimenters added an eighteenth, an amino acid related to the butyric acid that forms when butter turns rancid. It was the missing ingredient! The rats throve on the new diet. For the first time in history, chemists had succeeded in preparing a synthetic food of the protein-forming type, containing no natural ingredients whatever.

In other words, all three of the principal ingredients of natural food can now be manufactured to order by chemists. If the necessary factors known as vitamins can be added â€”and there is good reason to believe that these will not offer the chemist insuperable difficultiesâ€”a complete meal, one hundred percent synthetic, can come out of the test tube!

STILL it remains for laboratory workers to duplicate the crowning feat of natureâ€”to turn the protein-forming amino acids into the full-fledged proteins of animal and human tissue. Before a mechanic can assemble a steam engine, he must know the how and why of boilers, cylinders, and pistonsâ€”and so the chemist who would create a protein must lay the groundwork by finding out all that he can about the amino acids of which it is made. That is why the Los Angeles experimenters are testing their solubility in many liquids; studying their behavior in acids and alkalies; bombarding them with heat, light, X rays, and other radiations; studying their colors; testing their electrical properties with sensitive meters; and inspecting their crystal forms with microscopes. When the properties of each one are completely known, and all can be made to order, chemists will be prepared for the supreme attempt to put them together into products like those of nature.

Then, if some one of them succeeds, may come the most dramatic climax in the history of science. Will the test-tube creation be endowed with life? And if so, into what creatures might it be fashioned?

Today, no one can tell.