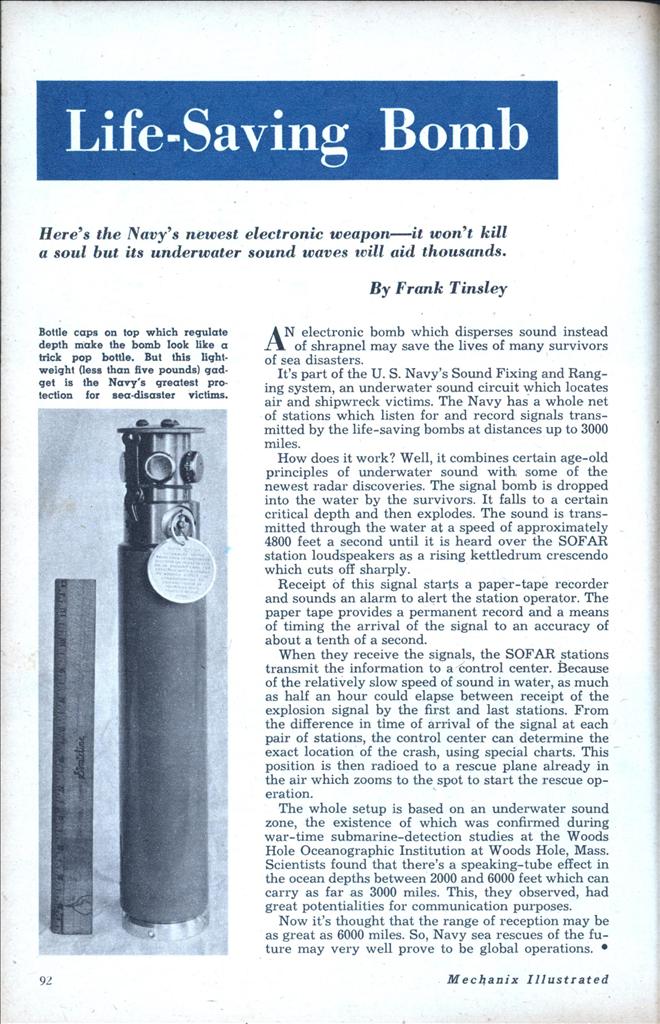 AN electronic bomb which disperses sound instead of shrapnel may save the lives of many survivors of sea disasters.

It’s part of the U.S. Navy’s Sound Fixing and Ranging system, an underwater sound circuit which locates air and shipwreck victims. The Navy has a whole net of stations which listen for and record signals transmitted by the life-saving bombs at distances up to 3000 miles.

How does it work? Well, it combines certain age-old principles of underwater sound with some of the newest radar discoveries. The signal bomb is dropped into the water by the survivors. It falls to a certain critical depth and then explodes. The sound is transmitted through the water at a speed of approximately 4800 feet a second until it is heard over the SOFAR station loudspeakers as a rising kettledrum crescendo which cuts off sharply.

Receipt of this signal starts a paper-tape recorder and sounds an alarm to alert the station operator. The paper tape provides a permanent record and a means of timing the arrival of the signal to an accuracy of about a tenth of a second.

When they receive the signals, the SOFAR stations transmit the information to a control center. Because of the relatively slow speed of sound in water, as much as half an hour could elapse between receipt of the explosion signal by the first and last stations. From the difference in time of arrival of the signal at each pair of stations, the control center can determine the exact location of the crash, using special charts. This position is then radioed to a rescue plane already in the air which zooms to the spot to start the rescue operation.

The whole setup is based on an underwater sound zone, the existence of which was confirmed during war-time submarine-detection studies at the Woods Hole Oceanographic Institution at Woods Hole, Mass. Scientists found that there’s a speaking-tube effect in the ocean depths between 2000 and 6000 feet which can carry as far as 3000 miles. This, they observed, had great potentialities for communication purposes.

Now it’s thought that the range of reception may be as great as 6000 miles. So, Navy sea rescues of the future may very well prove to be global operations.