The device on the second page is interesting. It’s sort of like a mechanical version of an LCD screen. 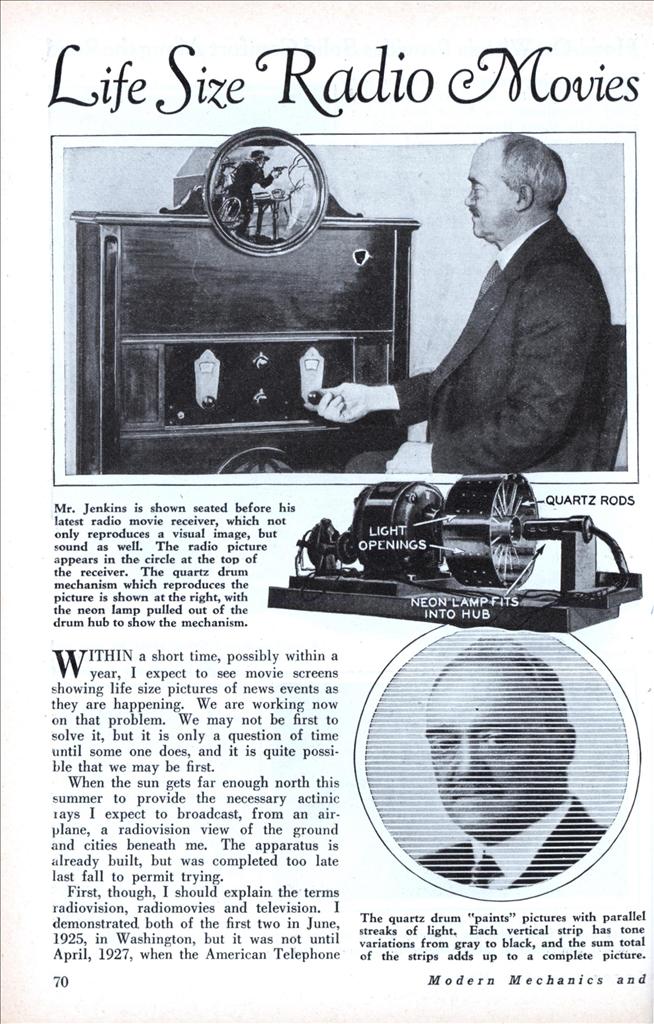 C. Francis Jenkins is inventor of the original movie camera and holder of more than 400 patents, many of them in the field of radiovision. He predicts for the near future life size radio movies and radiovision of news events which may be projected on theater screens at the actual instant they happen. Jenkins describes the present status of television and the lines along which he is working.

WITHIN a short time, possibly within a year, I expect to see movie screens showing life size pictures of news events as they are happening. We are working now on that problem. We may not be first to solve it, but it is only a question of time until some one does, and it is quite possible that we may be first.

When the sun gets far enough north this summer to provide the necessary actinic lays I expect to broadcast, from an airplane, a radiovision view of the ground and cities beneath me. The apparatus is already built, but was completed too late last fall to permit trying.

First, though, I should explain the terms radiovision, radiomovies and television. I demonstrated both of the first two in June, 1925, in Washington, but it was not until April, 1927, when the American Telephone and Telegraph company transmitted visual images by wire that the public became interested. In prepared press matter the A. T. & T. called this “television,” meaning vision by wire, just as telephone means voice by wire and telegraph means graphic symbols by wire. The public has since used “television” to mean any picture, whether still or moving, transmitted either by radio or wire, and received at the other end in a form in which it could be instantly seen.

That’s a rather loose definition, because it covers many things. I prefer to call movies transmitted by radio waves radiomovies, and actual vision of a thing or person, when sent by radio broadcast, radio-vision. That makes for clearness and intelligible discussion of the various processes used.

To produce pictures which can be projected on a large screen, we will have to abandon entirely the principles which have been used so far.

A lady visiting my laboratory and watching the radiomovie receiver in operation said: ‘-But Mr. Jenkins, where is the picture formed? Is it on the enlarging lens, on the mirror which changes the angle of projection, or is it farther back in the machine?”

I tapped the back of my head and said: “It’s here. There is no picture except what your eyes and brain form. You think you see a picture in the machine, but all you really see is a rapidly fluctuating point of light.” That’s hard for lots of people to understand. When we broadcast one of our silhouettes you see little figures going through their pantomine, and when we broadcast an ordinary film you see half tones like pictures on the movie screen. But actually neither picture exists outside your brain.

To explain why that is let me first recall a childhood amusement. Did you ever lay a coin under a sheet of paper, and with a pencil cause the image to appear on the paper? That’s what all present systems of picture transmission do. Instead of a pencil the lines are drawn by a point of light sweeping across the picture screen. They move so rapidly (forty-eight lines to the picture and fifteen pictures per second) that the eye continues to see them after they have actually disappeared, and, seeing 48 lines at one time, sees an entire picture.

A motor driven shutter, usually a revolving disc with 48 tiny holes, located in a spiral, sweeps past in front of a neon lamp, which is constantly fluctuating as the incoming signal strength varies. The fluctuations paint bright, shadowy and dark spaces, and when the eye assembles them as a whole you see a picture.

All picture receivers operate in the same general way, but there are two types of scanners, as they are called. One is the disc, and the other is the drum type. With either the possible size of the picture is the square formed by the distance between the inner and outer, or first and last holes in the spiral, and the first and second hole, at the inner end, where the holes are closest together. On a twelve-inch disc, for example, you can construct a scanner that will produce pictures about three-quarters of an inch square. The size of the disc increases so rapidly, as you increase the size of the picture, that it soon becomes too big to be used in a machine of any reasonable size, and likewise takes too much power to turn it at a constant, and relatively high, speed.

So I invented a drum scanner—a hollow drum, with the holes arranged in helical rows around its circumference, and the neon lamp inside. Then I went a step farther, and, instead of having a drum big enough for 48 holes in one helical row, I added more targets to my lamp, and arranged several rows of holes. Thus with a six-target lamp—the same as six ordinary lamps built in one, it only takes six helical rows of eight holes each. To get the maximum amount of light from each target to the hole in the drum I fitted little eighth-inch thick rods of quartz or glass rod, leading from the hollow hub, in which the light was located, to the holes in the drum. It is a curious fact that a rod of just ordinary glass will transmit more light than the same amount of air, while a quartz rod is so peculiar that it will even transmit light around bends without losing any of the rays.

Because of the multi-target lamps and drum scanner I can produce a much larger picture in only a fraction of the space taken by a disc machine. An eight-inch drum with a four-inch face will produce a two-inch square picture, which would require a disc at least thirty-six inches in diameter.

Several persons have asked how many radio fans are receiving broadcast movies and pictures today. Our fan mail indicates about 20,000 receive the broadcast from our two stations, one here in Washington and the other at the factory in Newark. There are many more receivers than that in use, however, for not everyone is so situated he can pick up our broadcast. The manufacturer of one type of neon glow lamp used in an inexpensive amateur machine I designed told me not long ago that they had sold 50,000 of the lamps.

How are we going to project the picture on a movie screen? Certainly not with any existing equipment, for the neon lamp has a dull, pinkish red glow, and even with a ten or twelve-inch magnifying lens in front of the screen the best we are able to get is a picture that appears to be about eight inches square.

To produce projected pictures we must substitute a powerful arc or incandescent for the relatively weak neon lamp, and, since we can’t vary the light to paint the picture, we must make the broadcast signal operate some sort of shutter mechanism, in other words just reverse the present process.

Next, instead of just transmitting one line at a time, we should have an entire picture, on a flat surface, just as a magic lantern projects a scene on the screen.

Way back in 1894, the year before I built the original motion picture projector and demonstrated it before the Franklin Institute, I suggested, in an article in The Electrical Engineer, that pictures might be transmitted by electricity and reproduced on a flat surface by assembling huge squares of thousands of selinium cells at the sending end, and a corresponding square of small electric globes at the receiving end, each cell being connected by wire to the corresponding light. The light sensitive cells would receive an image of anything placed before them, just as a photographic plate “takes” a picture, and, by transmitting varying amounts of current, light the lamps to varying degrees, so that a picture would be painted on the receiving board.

Nothing ever came of that suggestion, but in searching for a new method of receiving radiomovies, we tried a variation of it. On a large square board we assembled 48 rows of flashlight lamps, with 48 in each row, a total of 2,304 three-volt lights. The lamps were wired to a commutator, which distributed current to them in proportion to the strength of the incoming radio signals.

It was an interesting experiment, but it failed, for a curious reason. Remember, the flashlight lamps were all the standard three-volt type. The first problem was how much input voltage do we need to light three-volt lamps, with one-fourth ampere input, when the commutator speed makes contact of 1/35,000 of a second for each lamp. And we found the answer was 95 volts.

So we bought 2,500 lamps, screwed 2,304 of them into our sockets, and started to work. But it wasn’t long until we had run out of spares, as lamp after lamp burned out. The trouble was that it took 95 volts to light the lamps, but with that much pressure instead of the current flowing 1/35,000 of a second, the contact points arced, and the arc didn’t break until the contact had traveled some distance, so, instead of a 1/35,000 of a second flash, we were actually getting a contact lasting 1/15,000 of a second, and hence the lamps burned out. If we reduced the voltage to shorten the arc the lamps would not get enough current, and if we furnished enough current the lamps would burn out.

We were still convinced that the flat picture theory was good, but the method was wrong.

We are now experimenting with something quite different. Instead of lamps we have built up a square of glass cells, something like a honeycomb, with square instead of hexagonal cells. Each cell is half an inch square, from center of one thin glass wall to center of the other, and they are four inches deep. When a powerful lamp is placed behind the cells, the rays pass through them, and, if we can open and close the cells fast enough, using radio signals to do the work, we can create a picture by blocking them out, either completely or partially.

It is too early to say whether that experiment will succeed. If it doesn’t, we will keep on trying. At present we are using the attraction and repulsion of changing current to lift and lower little sheets of foil in each cell. As they flap up and down they act as valves, alternately admitting and barring the light rays.

If our present line of research succeeds we will have a square of light cells 24 by 24 inches. Behind that will be a powerful light, and in front the necessary lenses to gather the light rays forming the picture, and project them on a screen. With refinements in construction the size of the cells could be reduced, and a home receiver, with a large incandescent light instead of an arc, built on the same principles.