Popular Mechanics
Issue: May, 1952
Posted in: Nautical
3 Comments on Lifeboat Has Invisible Crew (May, 1952) 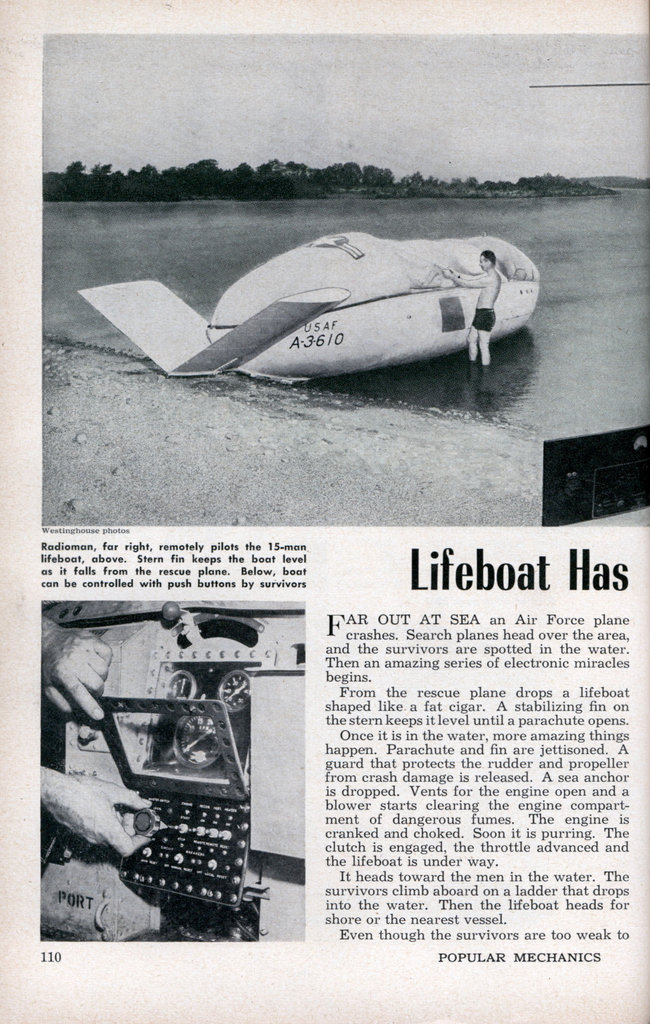 FAR OUT AT SEA an Air Force plane crashes. Search planes head over the area, and the survivors are spotted in the water. Then an amazing series of electronic miracles begins.

From the rescue plane drops a lifeboat shaped like a fat cigar. A stabilizing fin on the stern keeps it level until a parachute opens.

Once it is in the water, more amazing things happen. Parachute and fin are jettisoned. A guard that protects the rudder and propeller from crash damage is released. A sea anchor is dropped. Vents for the engine open and a blower starts clearing the engine compartment of dangerous fumes. The engine is cranked and choked. Soon it is purring. The clutch is engaged, the throttle advanced and the lifeboat is under way.

It heads toward the men in the water. The survivors climb aboard on a ladder that drops into the water. Then the lifeboat heads for shore or the nearest vessel.

Even though the survivors are too weak to do any more than pull themselves aboard, the lifeboat will take them to safety. It is manned by an invisible crew of radio waves.

A radio operator in the rescue plane performs all the operations by remote control.

If the survivors are strong enough to run the boat, there are two systems they can use. One is a pushbutton control that starts, stops and steers the boat at the touch of a button. The second is a conventional manual-control system for use if the push-button system fails.

The 3500-pound craft carries 15 men, provisions for 10 days and fuel for an 800-mile cruise. Two-way radios provide boat-to-plane communications. There’s a machine for distilling fresh water from sea water. A zippered canopy protects the passengers from sun or storms.