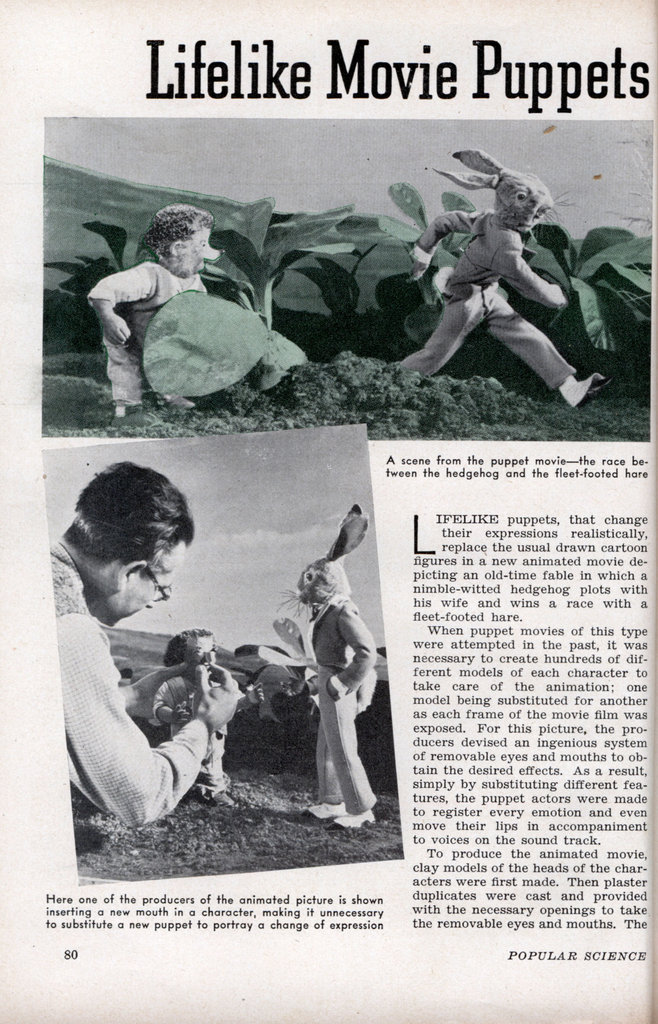 LIFELIKE puppets, that change their expressions realistically, replace the usual drawn cartoon figures in a new animated movie depicting an old-time fable in which a nimble-witted hedgehog plots with his wife and wins a race with a fleet-footed hare.

When puppet movies of this type were attempted in the past, it was necessary to create hundreds of different models of each character to take care of the animation; one model being substituted for another as each frame of the movie film was exposed. For this picture, the producers devised an ingenious system of removable eyes and mouths to obtain the desired effects. As a result, simply by substituting different features, the puppet actors were made to register every emotion and even move their lips in accompaniment to voices on the sound track.

To produce the animated movie, clay models of the heads of the characters were first made. Then plaster duplicates were cast and provided with the necessary openings to take the removable eyes and mouths. The bodies, arms, and legs of the puppets were made flexible so that they could be bent and adjusted to assume various positions.

In the actual filming, the process used was similar to the “frame-by-frame” method employed in making the conventional animated cartoon. With the puppet characters in the desired positions and fitted with the correct expressions, a single frame of the movie film was exposed. Then, with the characters altered to agree with the animation, the second frame was exposed, and so on.