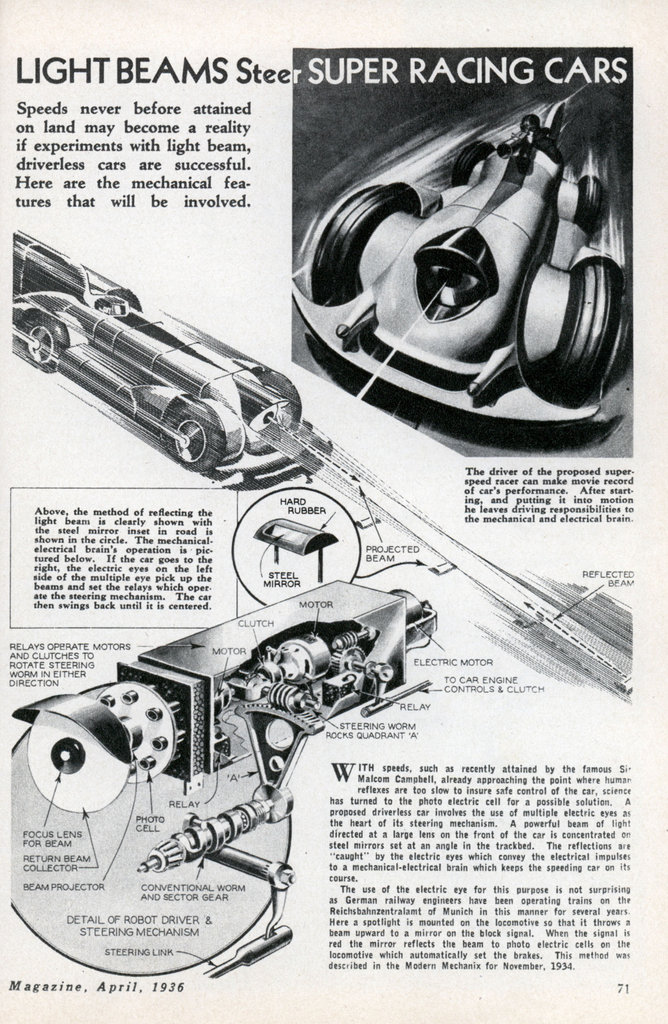 LIGHT BEAMS Steer SUPER RACING CARS
Speeds never before attained on land may become a reality if experiments with light beam, driverless cars are successful. Here are the mechanical features that will be involved.

WITH speeds, such as recently attained by the famous Sir Malcom Campbell, already approaching the point where human reflexes are too slow to insure safe control of the car, science has turned to the photo electric cell for a possible solution. A proposed driverless car involves the use of multiple electric eyes as the heart of its steering mechanism. A powerful beam of light directed at a large lens on the front of the car is concentrated on steel mirrors set at an angle in the trackbed. The reflections are “caught” by the electric eyes which convey the electrical impulses to a mechanical-electrical brain which keeps the speeding car on its course.

The use of the electric eye for this purpose is not surprising as German railway engineers have been operating trains on the Reichsbahnzentralamt of Munich in this manner for several years-Here a spotlight is mounted on the locomotive so that it throws a beam upward to a mirror on the block signal. When the signal is red the mirror reflects the beam to photo electric cells on the locomotive which automatically set the brakes. This method was described in the Modern Mechanix for November, 1934.