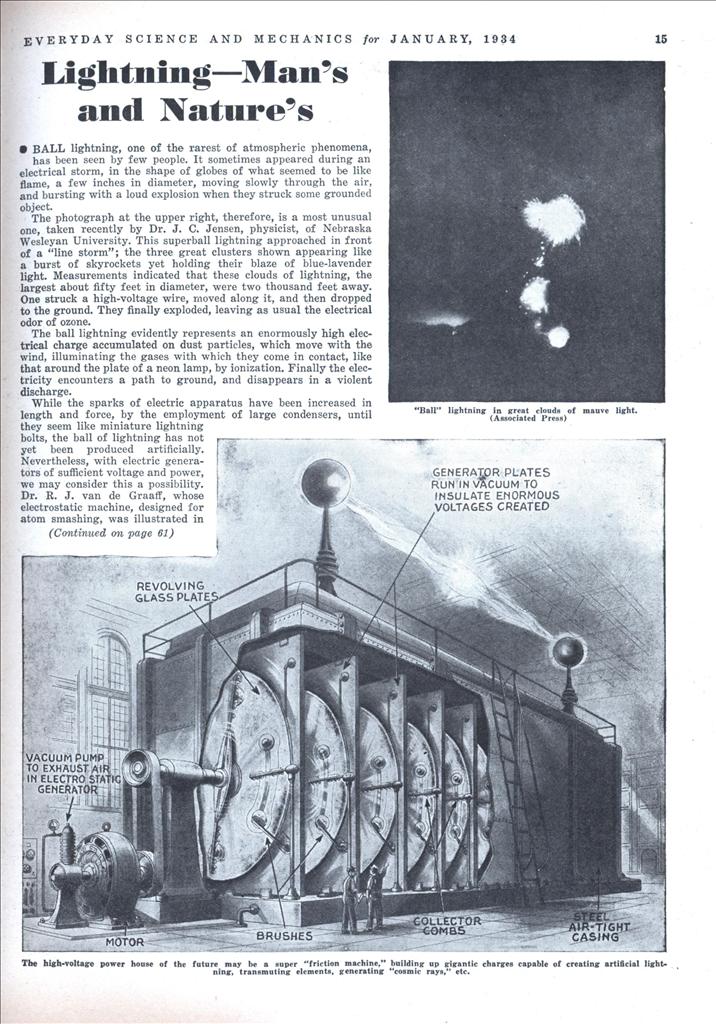 BALL lightning, one of the rarest of atmospheric phenomena, has been seen by few people. It sometimes appeared during an electrical storm, in the shape of globes of what seemed to be like flame, a few inches in diameter, moving slowly through the air, and bursting with a loud explosion when they struck some grounded object.

The photograph at the upper right, therefore, is a most unusual one, taken recently by Dr. J. C. Jensen, physicist, of Nebraska Wesleyan University. This superball lightning approached in front of a “line storm”; the three great clusters shown appearing like a burst of skyrockets yet holding their blaze of blue-lavender light. Measurements indicated that these clouds of lightning, the largest about fifty feet in diameter, were two thousand feet away. One struck a high-voltage wire, moved along it, and then dropped to the ground. They finally exploded, leaving as usual the electrical odor of ozone.

The ball lightning evidently represents an enormously high electrical charge accumulated on dust particles, which move with the wind, illuminating the gases with which they come in contact, like that around the plate of a neon lamp, by ionization. Finally the electricity encounters a path to ground, and disappears in a violent discharge.

While the sparks of electric apparatus have been increased in length and force, by the employment of large condensers, until they seem like miniature lightning bolts, the ball of lightning has not yet been produced artificially. Nevertheless, with electric generators of sufficient voltage and power, we may consider this a possibility. Dr. R. J. van de Graaff, whose electrostatic machine, designed for atom smashing, was illustrated in the January, 1932, issue of “Everyday Science and Mechanics,” has suggested the production of huge electrostatic machines as the generators of the future.

These would produce direct current at enormously high voltages; so that the electricity could be transmitted to a great distance with far less loss than by the present systems. Such machines we must imagine running in a high vacuum, not merely to reduce air resistance, but for insulation. We are limited in the electrical pressure, or voltages, that could be built up by such machines, running in series, only by the quality of the solid insulators that could be used. (The artist has drawn for this article a machine based on the Toepler-Holtz system, well known to experimenters).

With such a generator, we might be able to make even ball lightning, and discover a use for it; as well as smash common elements into the rare ones, and produce types of radiation far more penetrating than the X-ray.