“Lightning Does Not “Photograph” Scenery on Skin, as Tradition Believes”

All this time that’s been Lightning’s best tactic with the girls: “I’m a photographer” , “the nudity is for art’s sake.”.
Oh Lightning, you’re such a player. 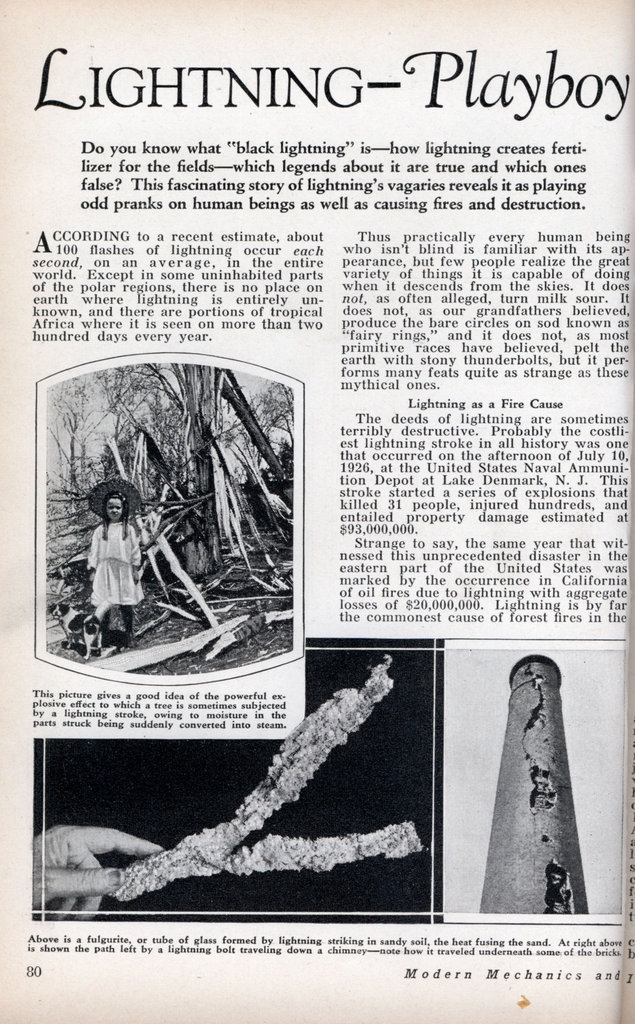 Lightning – Playboy of the Storm Skies

Do you know what “black lightning” isâ€”how lightning creates fertilizer for the fieldsâ€”which legends about it are true and which ones false? This fascinating story of lightning’s vagaries reveals it as playing odd pranks on human beings as well as causing fires and destruction.

ACCORDING to a recent estimate, about 100 flashes of lightning occur each second, on an average, in the entire world. Except in some uninhabited parts of the polar regions, there is no place on earth where lightning is entirely unknown, and there are portions of tropical Africa where it is seen on more than two hundred days every year.

Thus practically every human being who isn’t blind is familiar with its appearance, but few people realize the great variety of things it is capable of doing when it descends from the skies. It does not, as often alleged, turn milk sour. It does not, as our grandfathers believed, produce the bare circles on sod known as “fairy rings,” and it does not, as most primitive races have believed, pelt the earth with stony thunderbolts, but it performs many feats quite as strange as these mythical ones.

Lightning as a Fire Cause

The deeds of lightning are sometimes terribly destructive. Probably the costliest lightning stroke in all history was one that occurred on the afternoon of July 10, 1926, at the United States Naval Ammunition Depot at Lake Denmark, N. J. This stroke started a series of explosions that killed 31 people, injured hundreds, and entailed property damage estimated at $93,000,000.

Strange to say, the same year that witnessed this unprecedented disaster in the eastern part of the United States was marked by the occurrence in California of oil fires due to lightning with aggregate losses of $20,000,000. Lightning is by far the commonest cause of forest fires in the western states, and throughout the country it is estimated to cause the death of about 500 human beings, on an average, each year. In contrast to these disastrous effects, many of lightning’s doings are whimsical and even amusing, rather than harmful. In a collection of anecdotes published years ago by the French astronomer Camille Flammarion several cases are recorded in which lightning snatched things from people’s hands and carried them away to a distance.

“There is a case,” says this writer, “of a mug being thus spirited away from a man who had just been drinking from it and deposited undamaged in a courtyard near; the man himself suffering no injury. A youth, holding a missal from which he is singing, has it torn from his hands and destroyed. A whip is whisked out of a rider’s hand. Two ladies, quietly knitting, have their knitting-needles stolen. A girl is sitting at her sewing machine, a pair of scissors in her hand; a flash of lightning, and her scissors are gone, and she finds herself sitting on the sewing machine. A farm laborer is carrying a pitchfork on his shoulder; the lightning seizes it, carries it off fifty yards or so, and twists its two prongs into corkscrews.”

There are several records of iron and copper nails being pulled out of furniture by lightning while the woodwork remained uninjured. Clocks and watches are often stopped by lightning in their vicinity, on account of its magnetizing effects. In one case a ship was struck by lightning; none of the passengers were injured, but all their watches stopped at the moment the stroke occurred.

One well-known prank of lightning is to undress its victims; sometimes without doing them any bodily harm. As an offset to the painful injuries it often inflicts, lightning is said, in certain cases, to have cured human beings of blindness, deafness, dumbness, paralysis and rheumatism. One of the most remarkable tales cited by Flammarionâ€”vouched for as true by a Polish-countess â€” relates to a stroke of lightning that entered the open door of a stable in August, 1901. There were twenty cows in the stable. The lightning is said to have killed every alternate cow, beginning with the one nearest the door, while the other ten were not even injured. Page Mr. Ripley!

Glassy formations called fulgurites, or lightning-tubes, due to the fusing of loose sand along the path of a lightning discharge beneath the surface of the ground, are well known to science, though they are not very common. Fine specimens may be seen in the National Museum, in Washington, and in museums elsewhere. They are of various sizes, from a fraction of an inch to several inches in diameter, and in some cases extend more than 25 feet into the ground.

The inner surface is of smooth glass, while the outer consists of rough, incompletely fused particles of sand and often bears longitudinal ridges and furrows.

The tubes are frequently twisted in spirals and are sometimes branched. At one time fulgurites were believed to be formed by excretions from the roots of plants.

Another curious way in which lightning sometimes leaves its “autograph” is the production of branching pink marks, called lightning-prints, on the skin of a human being or other animal who is struck by lightning, with or without fatal results. When the victim recovers, the marks fade away in the course of a day or two.

Lightning Prints Are Really Burns These marks were once believed, even by some scientific authorities, to be photographs of trees or other vegetation growing near the place where the light-ning occurred, but the true explanation is much simpler. A lightning – print is merely the trace left by the passage of a branching electrical discharge through the tissues of the body. In other words, it is a species of burn, and it is some-times seen on the bodies of persons who have been killed or injured by artificial electric currents.

The effects of lightning on trees take a variety of forms. Sometimes so much steam is generated by the passage of the discharge through water-bearing tissues that the whole tree is blown to pieces. The removal of long narrow strips of bark is a common effect. In some cases lightning produces numerous small spots and blotches on twigs and branches, easily mistaken for the effects of parasitic diseases.

Lightning injuries are frequently hidden beneath the bark and revealed only as scars in the annual rings when the tree is cut down. They often take the form of false rings, which, like those due to frost or disease, are a common source of error in counts of annual rings made to determine the age of the tree or to fix the date of some event in its life history. Cases have been reported in which lightning divided the wood of a tree trunk into two concentric portions, like the “telescoping” tubes of a spyglass.

A fact of interest to farmers is that the process of “fixing” atmospheric nitrogen, now carried on so extensively by artificial methods for the production of fertilizers, is also performed by Nature in the thunderstorm. Every stroke of lightning produces ammonia and other nitrogen compounds from the gases of the air, and these fertilizing substances, brought down by rain, help to enrich the soil. A French authority estimates that in the Tonkin Delta of Indo-China, where thunderstorms are very frequent, the natural fertilizers thus supplied from the sky are worth at least $20,000,000 a year.