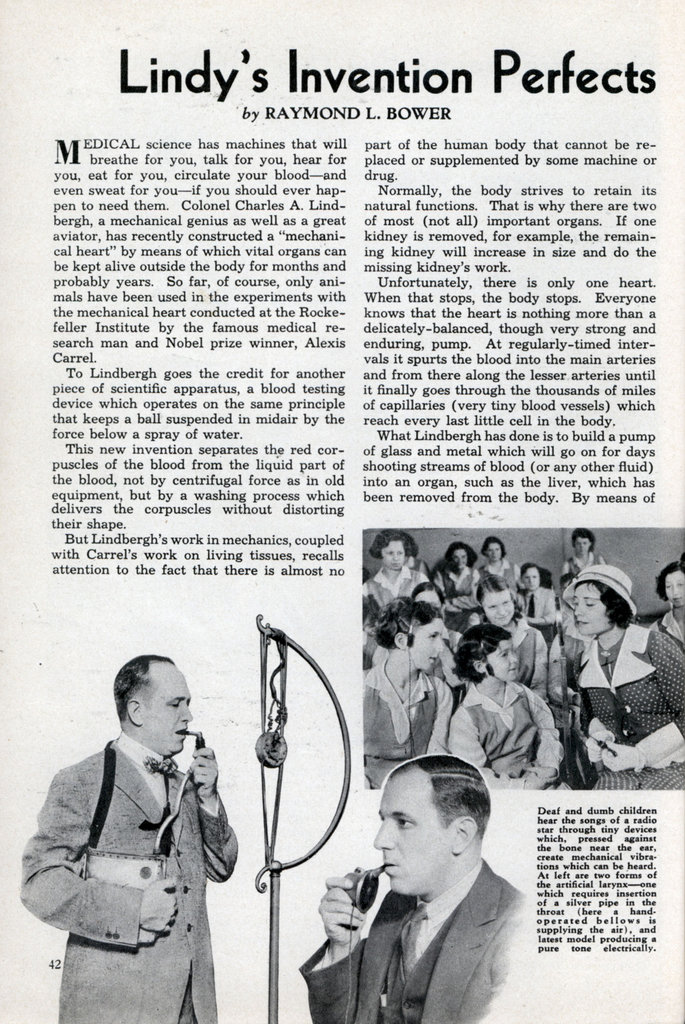 Lindbergh’s new “mechanical heart” calls attention to the fact that medical science even now has marvelous machines which will replace parts of the human body or do the work of parts that fail.

MEDICAL science has machines that will breathe for you, talk for you, hear for you, eat for you, circulate your bloodâ€”and even sweat for youâ€”if you should ever happen to need them. Colonel Charles A. Lindbergh, a mechanical genius as well as a great aviator, has recently constructed a “mechanical heart” by means of which vital organs can be kept alive outside the body for months and probably years. So far, of course, only animals have been used in the experiments with the mechanical heart conducted at the Rockefeller Institute by the famous medical research man and Nobel prize winner, Alexis Carrel.

To Lindbergh goes the credit for another piece of scientific apparatus, a blood testing device which operates on the same principle that keeps a ball suspended in midair by the force below a spray of water.

This new invention separates the red corpuscles of the blood from the liquid part of the blood, not by centrifugal force as in old equipment, but by a washing process which delivers the corpuscles without distorting their shape.

But Lindbergh’s work in mechanics, coupled with Carrel’s work on living tissues, recalls attention to the fact that there is almost no part of the human body that cannot be replaced or supplemented by some machine or drug.

Normally, the body strives to retain its natural functions. That is why there are two of most (not all) important organs. If one kidney is removed, for example, the remaining kidney will increase in size and do the missing kidney’s work.

Unfortunately, there is only one heart. When that stops, the body stops. Everyone knows that the heart is nothing more than a delicately-balanced, though very strong and enduring, pump. At regularly-timed intervals it spurts the blood into the main arteries and from there along the lesser arteries until it finally goes through the thousands of miles of capillaries (very tiny blood vessels) which reach every last little cell in the body.

What Lindbergh has done is to build a pump of glass and metal which will go on for days shooting streams of blood (or any other fluid) into an organ, such as the liver, which has been removed from the body. By means of a thin tube, the mouth of the pump is attached to the main blood vessel of the removed organ, which remains in a glass jar filled with infection-resisting fluid. Every time the pump tilts, a stream of feeding solution (not blood) passes along the tube and so into the artery and the capillaries. The removed organ will live as long as it has food and remains free from infection.

At present, the mechanical heart is being used for experimental purposes only. With it doctors will be able to find out exactly how vital organs of the body do their work. This is more accurate than the research methods now applied directly to human beings. Doctors to-day have several machines that will breathe for you. The pulmotor, applied over the face, forces air directly into the lungs. The Drinker respirator, a cabinet within which are created alternating air pressures, takes the place of the muscles which operate the lungs, just as the pressure of the hands on the ribs is employed in the Schafer method of artificial respiration. The oxygen tent or oxygen-tube, fitted through the nose, delivers concentrated volumes of this life-giving gas to the choking patient.

There is another machine, worked by electricity, which will set a heart beating again after it has been stopped for a few minutesâ€” by some sort of shock, electrical, operative, etc. This machine, called the “artificial pacemaker” depends on the fact that the heart has a “timer,” a little bundle of nerves called the “bundle of His” after its discoverer, Wil-helm His, Jr. This bundle of nerves tells the heart muscle when to contract. When the bundle fails to operate, a long needle is pushed through the chest into the heart. At the end of the needle is a tiny spark-gap. An electrical machine shoots tiny sparks across this gap in the same rhythm that the bundle of nerves usually adopts, 60 to 72 a minute. These electrical impulses start the heart beating again (in many though not all cases) until the bundle of His picks up the rhythm and gets back on the job. The artificial pacemaker is then withdrawn.

Sometimes, as when a leg is frozen or its arteries wear out, a machine is necessary to circulate the blood in the leg. If the blood failed to circulate, the tissues would die from lack of nourishment â€” just as the animal organs did when removed from the body before Lindbergh’s mechanical heart came to the rescue. The “pavaex” machine circulates the blood in the extremities. It consists of a glass boot, fitted over the leg to form an air-tight chamber, and a pump which delivers alternating positive and negative pressures within the boot. When this is turned on, the tiny blood vessels get an opportunity to expand and contract more easily and send along the slow-moving blood.

Occasionally, after a severe operation, a patient cannot eat and has to be fed by mechanical means. One method is called “intravenous drip.” A needle is inserted into the vein and a rubber tube attached. The tube runs to a bottle of dextrose (sugar) solution hanging upside-down on a stand above the bed. The stop-cock on the bottle is then opened and the necessary nourishment drips slowly into the vein.

If the doctor wants to find out what is wrong with your stomach, he may ask you to swallow a tiny camera. Before he pulls it out again, he will have sixteen pictures of your stomach lining.

Bone conducts sound better than air. If you go deaf because of essentially mechanical difficulties in the outer ear, medical science has a device which, pressed against the bones of the head, catches sounds and permits you to hear.

This Gadget Talks For You!

Suppose you can’t talk because your vocal cords are destroyed. The doctors will give you an artificial voice-box (larynx). In the front part of your throat, just under your Adam’s apple, they will place a short silver tube with a rubber tube running out from it. At the end of the rubber tube is a reed something like that in a saxophone. When the air from your lungs passes by the reed it will vibrate almost as well as the vocal cords used to do. The sound produced here is modulated by the tongue and lips to produce words.

In a more recent artificial larynx, the constant tone is produced by electricity, then modulated by the lips and tongue. Here there is no need for the throat operation which several hundred persons Lave already undergone to regain the power of speech.

Should you be afflicted with a disease germ which can be killed by heat between 100 and 107 degrees Fahrenheit, the doctors may put you in a machine which will raise your temperature to that point and keep it there for hours. The treatment is called “hyperthermia” or “hyperpyrexia” and a great number of machines can be safely used to produce it. One of the latest machines raises the body temperature, way inside, by passing short radio waves (6 meters) directly through the body. It is called “radiothermy.”

Every month 1,000 people in the U. S. lose an arm or a leg. If there are even three inches of the stump left, however, you can be fitted with an artificial limb which will look natural and may be so ingeniously contrived that you can still play base-ball! A missing nose, ear, or breast can be replaced with a rubber substitute, colored to look natural. The artificial nose hooks over the ears like a pair of glasses. You can chew with false teeth, but no one has yet made a false eye that sees!