Modern Mechanix
Issue: May, 1936
Posted in: Origins
Tags: how its made
1 Comment on LINOLEUM- Another Industrial “Accident” (May, 1936)

LINOLEUM- Another Industrial “Accident” (May, 1936) 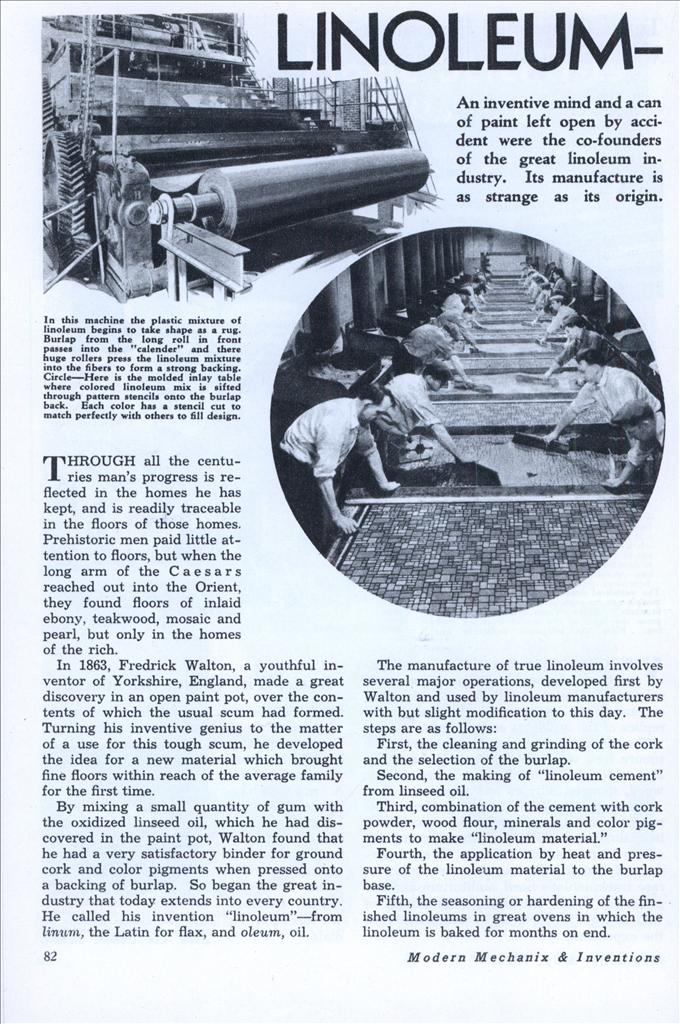 An inventive mind and a can of paint left open by accident were the co-founders of the great linoleum industry. Its manufacture is as strange as its origin.

THROUGH all the centuries man’s progress is reflected in the homes he has kept, and is readily traceable in the floors of those homes. Prehistoric men paid little attention to floors, but when the long arm of the Caesars reached out into the Orient, they found floors of inlaid ebony, teakwood, mosaic and pearl, but only in the homes of the rich.

In 1863, Fredrick Walton, a youthful inventor of Yorkshire, England, made a great discovery in an open paint pot, over the contents of which the usual scum had formed. Turning his inventive genius to the matter of a use for this tough scum, he developed the idea for a new material which brought fine floors within reach of the average family for the first time.

By mixing a small quantity of gum with the oxidized linseed oil, which he had discovered in the paint pot, Walton found that he had a very satisfactory binder for ground cork and color pigments when pressed onto a backing of burlap. So began the great industry that today extends into every country. He called his invention “linoleum”â€”from linum, the Latin for flax, and oleum, oil.

The manufacture of true linoleum involves several major operations, developed first by Walton and used by linoleum manufacturers with but slight modification to this day. The steps are as follows: First, the cleaning and grinding of the cork and the selection of the burlap.

Second, the making of “linoleum cement” from linseed oil.

Fourth, the application by heat and pressure of the linoleum material to the burlap base.

Fifth, the seasoning or hardening of the finished linoleums in great ovens in which the linoleum is baked for months on end.

The Mediterranean countries of Portugal, Spain and Algeria contribute cork.

Cork has certain qualities possessed by no other materials, notably its lightness combined with strength, its elasticity, its imperviousness to air and water, and its insulation qualities. The cork is run through huge grinders, and then between enormous stones where it is ground so fine that it resembles talcum powder.

India grows jute, a reed whose strong fibres are woven into burlap. Only the Scottish weavers at Dundee weave burlap of the fine and even texture suitable for use as a backing for linoleum. Every yard is closely inspected so as to make sure that the burlap is free from knots and heavy fibres and of balanced strength between its width and length.

Linoleum “cement” is made from linseed oil and certain resins, which properly combined and treated, form a tough, rubber like material of great strength and endurance.

Mineral color pigments, obtained from various parts of the United States, are also an important factor, since bright and colorful patterns have come to be much in demand. Finely ground wood flour helps to carry these brilliant hues.

The materials are all carefully weighed and then poured upon a moving belt which carries them to the mixer below, then rolled upon burlap or cut to the design patterns and pressed upon the burlap base by hand.

From the rollers, the linoleum passes directly into huge ovens, fifty feet high, for the “long bake.” These are fitted with racks, from which the linoleum is hung in enormous folds. Each oven will accommodate more than a mile of linoleum. At constantly maintained temperatures, the linoleum is cured for a period varying from three to six weeks. Not until laboratory tests have proved it thoroughly cured is the oven allowed to cool.

At another linoleum plant material to be used as the base for printed patterns is removed from the stoves before it has wholly matured, and the design printed on it.

These designs are applied with wooden printing blocks which automatically take on a coat of varnish paint and then transfer it to the linoleum.

In all stages in the manufacture of linoleum, inspectors watch the material closely, and laboratory tests are made at many points.