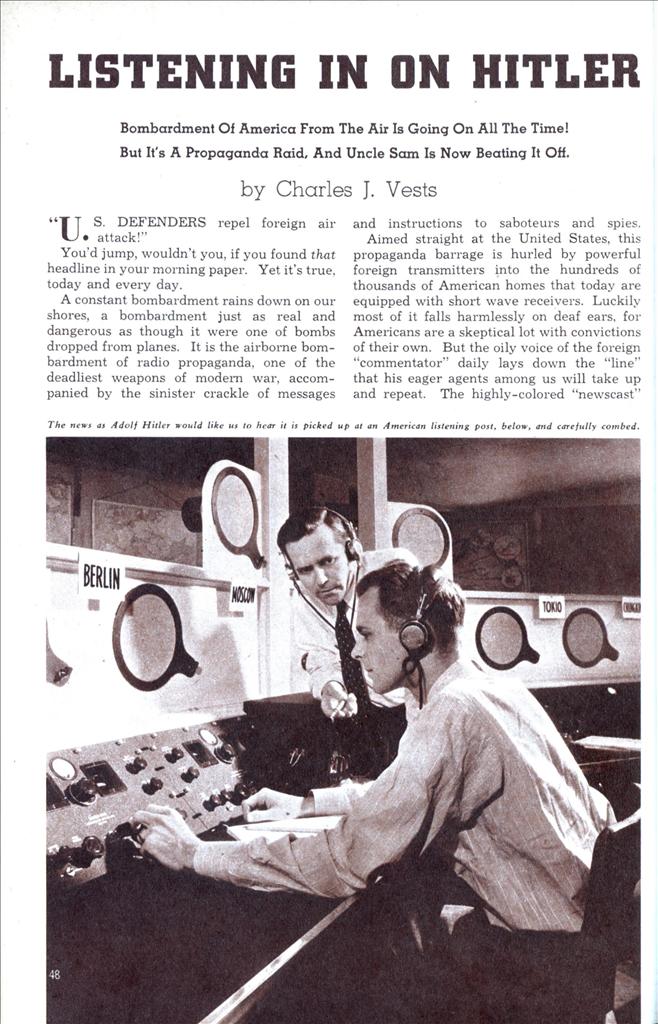 LISTENING IN ON HITLER

Bombardment Of America From The Air Is Going On All The Time! But It’s A Propaganda Raid, And Uncle Sam Is Now Beating It Off.

You’d jump, wouldn’t you, if you found that headline in your morning paper. Yet it’s true, today and every day.

A constant bombardment rains down on our shores, a bombardment just as real and dangerous as though it were one of bombs dropped from planes. It is the airborne bombardment of radio propaganda, one of the deadliest weapons of modem war, accompanied by the sinister crackle of messages and instructions to saboteurs and spies.

Aimed straight at the United States, this propaganda barrage is hurled by powerful foreign transmitters into the hundreds of thousands of American homes that today are equipped with short wave receivers. Luckily most of it falls harmlessly on deaf ears, for Americans are a skeptical lot with convictions of their own. But the oily voice of the foreign “commentator” daily lays down the “line” that his eager agents among us will take up and repeat. The highly-colored “newscast”

often betrays, by a change in tone, some impending stroke of tremendous diplomatic or military importance. Not even the “entertainment” is innocent. Coded messages to spies have been played on the piccolo, if you please, in Transatlantic broadcasts!

The broadcasts, as a rule, however, are merely the frontal attack. Flanking them are the more perilous penetrations of secret, unlicensed transmitters which exchange vital information with agents bent on the obstruction of our national defense and the destruction not only of our morale but of lives and property as well.

And is Uncle Sam doing anything about this? Plenty!

The air above us is policed as thoroughly as Times Square in the rush hour by a combination of government and private radio agencies. They cannot choke off the flow of propaganda from licensed foreign stations. But they can do the next best thing by “catching” it, recording it, analyzing it, and moving promptly to counter-act it wherever necessary.

Let’s see how they do it. In a house on the eastern shore of Maryland, that looks for all the world like the residence of a suburban business man, a cluster of very intent individuals sits with ears glued to radio microphones. Over the head of each is a card indicating the source of the material pouring through the headsets—Berlin, Rome, Tokyo, London, Moscow.

Every hour of the day, seven days a week, their vigil is maintained, and every syllable of every foreign broadcast is heard, digested, recorded, translated and analyzed. If it seems harmless on the first reading, it is read and read and read again.

But here’s the whistling of a foreign transmitter! A thin, dark-skinned man at a corner set of dials listens intently. The recording machine is turned on; quick fingers skip nimbly through a shorthand transcription. There must be no slip-up here, lest one apparently harmless word slip by!

The broadcast ends. It has been nothing more than an Austrian station reporting the delights of a vacation in Roumania.

But the men at the Maryland receiving station give the transcription their closest attention. They boil it down; translators jot down the English meaning of every phrase, every idiom. Then, a casual sentence— “Already great numbers of tourists from the Reich are discovering this delightful holiday land.”

Immediately the broadcast is digested and analyzed. A resume is snatched from the typewriter and rushed to the teletype connected with the State Department in Washington. The governmental wheels begin to turn—and another invasion is known before the first gun is fired!

This is the work of the Foreign Broadcast Monitoring Service, a division of the Federal Communications Commission, which does daily battle on a broad front to keep up with the 24-hour barrage of propaganda which pours over our borders from the capitals of Europe and Asia. Its aim is a dual one: to record, analyze and offset harmful propaganda; to winnow out information of diplomatic or military value to the United States.

Eleven major listening posts are maintained on a 24-hour basis in strategic locations in the United States, Hawaii, Alaska, and other key points. Theirs is the job of translating, transcribing and detecting every tell-tale word or phrase in a daily volume of between 600,000 and 900,000 words of foreign broadcast material. The Berlin radio tosses eleven hours of propaganda our way every day; the British send us about six and a half hours, Japan four and a half hours, and Italy more than four hours, to say nothing of a score of lesser fry. In addition, we must keep an ear attuned to the broadcasts directed at our South American neighbors.

Throughout Latin America today, our own propaganda forces are waging a tense struggle against those of the Axis, with much at stake. Uncle Sam’s radio watch dogs are trained to growl whenever they detect a telling new trend in the propaganda of our rivals. The eleven monitoring stations are linked together in constant communication and are, in turn, tied up by teletype at Washington to all the key government bureaus that may be called upon to act on the information given them. Thus, a well-aimed propaganda uppercut from Berlin may be noted almost as soon as it lands.’ Within a few hours, an effective American counter blow is launched from Washington in the form of some statement or action by the State Department or the Chairman of the Senate Committee on Military Affairs. When you watch the papers closely you can sometimes actually see this happen if you are aware of the complicated, little-known machinery by which we achieve such quick results.

Here’s another typical Foreign Broadcast Monitoring Service listening post. It stands alone in a mansion on a hilltop. Only the outdoor antennae and the frequent arrival and departure of automobiles testify to the tension of repressed activity within. From room to room the eye sees walls literally paneled with dials and gadgets. There is silence broken only by the occasional squeals of receivers. For the most part the listeners work with ear phones. Pale, tense, young, they wear habitually strained expressions. Youth counts in this business. Listening, just sheer listening, is a terrific nervous strain. Try devoting all the powers of concentration you can muster on a radio speech for 10 minutes and you’ll get some idea of what it must be like to put in an 8-hour trick.

Each station is manned by a compact staff of highly trained radio technicians, translators, and analysts. They are specialists, every one. As the listeners pull the broadcasts in from the ether they are recorded and turned over to the translators, each of whom is intricately familiar with at least four languages. In Kingsville, Texas, are specialists on Latin-American affairs, in Portland, Oregon, are men to whom the Far East is an open book. It takes seven hours to transcribe and translate a single hour of recorded broadcasts. Once transcribed, the data must be reviewed by an analyst whose duty it is to lead 35.000 words a day without missing a single significant word. So expert are these men that they were able to detect, hours in advance, Germany’s intended invasion of Russia, and Japan’s plan to occupy Indo-China.

Strongly backing up the FCC in aerial fishing expeditions for advance information on important events are the two high powered short wave listening posts maintained by the National Broadcasting Company in Hollywood and at Bellmore, Long Island. NBC’s foreign language experts eavesdrop around the clock on European and Far Eastern broadcasts. Lines link them directly to the NBC News Room in New York, from which, thanks to the keen perceptions of the monitors, the network was able to flash a scoop on the Russian invasion.

A strangely variegated lot are the NBC monitors, including among their number White Russian refugees, and expatriates from every land in Europe and Asia. Jules Van Item, their Chief, is a Holland-born American who has lived in Germany, France, Roumania, Hungary, Spain, Portugal. Argentina, and Uruguay, and can order his cakes and coffee fluently in one dozen languages.

Playback devices play a big role in covering up for the fallibility of the human ear. One dogged NBC listener played a faint, blurred, barely audible recording of a speech from Bordeaux, France, over and over again. His reward, when he finally pieced it out, was a clean beat on the news of Marshall Petain’s capitulation to Germany.

One of the neatest radio tricks of the current war, however, was not the work of the FCC or the NBC but was brought off instead by the G-men. Special Agents J. C. Ellsworth and M. H. Price spent long weeks glued to the controls of a little short-wave transmitter at Centerport, Long Island. During that time they were actually in direct touch with the Nazi Secret Service in Hamburg, Germany, which believed them to be secret agents of the Gestapo and freely traded valuable espionage instructions and data with them in return for certain worthless “information,” trumped up by the FBI to make it seem real.

This led to the capture of Frederick Duquesne and the others of his dangerous spy ring, including Axel Wheeler-Hill, and thwarted what might have been a serious wave of sabotage.