This magazine can be kind of depressing… 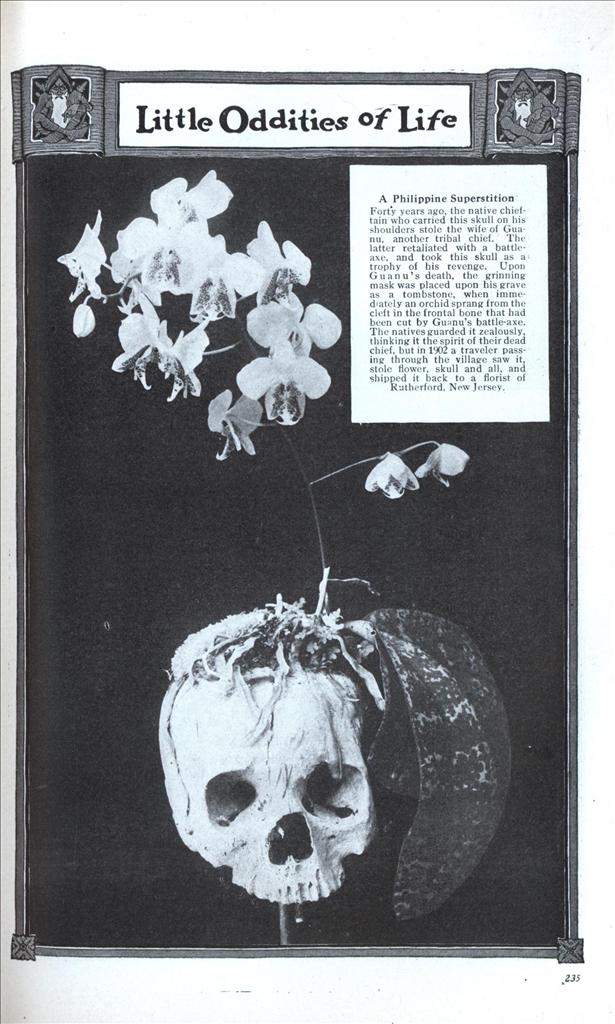 A Philippine Superstition
Forty years ago, the native chieftain who carried this skull on his shoulders stole the wife of Guanu, another tribal chief. The latter retaliated with a battle-axe, and took this skull as a trophy of his revenge. Upon Guanu’s death, the grinning mask was placed upon his grave as a tombstone, when immediately an orchid sprang from the cleft in the frontal bone that had been cut by Guanu’s battle-axe. The natives guarded it zealously, thinking it the spirit of their dead chief, but in 1902 a traveler passing through the village saw it, stole flower, skull and all, and shipped it back to a florist of Rutherford, New Jersey.

TENDERLOIN OF WHALE
The photograph above shows Captain J. D. Loop and one of the gray whales he has brought in for the market at Long Beach, California. His advertisement asserts that each whale gives five tons of tenderloin; that the meat is free from fat and waste, and that it should tickle the public’s palate at fifteen cents a pound!

THE FIRST HORSE MEAT BUTCHER SHOP
New York City now can eat porterhouse from the shanks of old Dobbin, if it desires. A butcher shop has opened which deals in horse meat exclusively, and at present it enjoys a lively patronage.

He Lives with a Cow
This eccentric old Irishman believes in bovine company. His stone and sod house shelters both him and his faithful cow. Whenever either of them wants fresh air, they poke their heads through a hole in the roof.

THE SLEEPING PORCH OF THE SHINING RAILS
Railroad presidents may have their million dollar palaces with luxurious palm-bordered sleeping porches on the side, but here is a section hand’s version of the sleeping: porch-de-luxe. Walking along the railroad tracks any hot summer night in the vicinity of a train of work cars one will see the top of nearly every car occupied by an audibly sleeping form. How some of the most strenuous sleepers ever retain their original equilibrium is a genuine mystery.

A PHILIPPINE “SNOOZING MACHINE”
You must have either a combination of alligator hide for skin and steel wires for nerves, or else you must seek your rest in a complicated mechanism in the Islands. These “snoozing machines” are equipped to, guard the wooer of Morpheus from the attentions of beetles, mosquitoes, gnats, ticks, lice, deer-flies, mice, rats, chameleons, and lazy house snakes who have a predilection for nesting on the warm bosoms of humans.

She Invented Her Own Job
It is a sinecure, or would be considered so by the other 99,999,999 people in the country, to be sea chaperon on a Pacific liner, but that is the job of Mrs. Vern Lattimore of San Francisco. She draws real money—quite an envelope of it in fact — for chaperoning tender young debutantes on the Hill line steamer—”The Great Northern.” The job has been there all of these years waiting for some one to come along and point out to the steamship company the necessity of having a comely, efficient and versatile chaperon. Mrs. Lattimore—a war widow, her husband having fallen in France—decided that she could do well in a position that made her a sort of plain clothes woman for Cupid so she inquired for the position, secured it and now she’s holding it down nicely. The next time you cross the Pacific perhaps you’ll see her and when you do you can recall that you are gazing at a keen thinking young person who originated a profession for her own benefit.

Official Sunshine
Miss Perin’s job is to see that nobody around the Western health resort, where she works, gets gloomy or lugubrious. She must carry flowers to the bedfast and say an encouraging word or so to the hapless individual who is being wheeled to the operating room to be surgically severed from his only appendix. She must comfort the neurasthenic and beam upon the bilious; she must point out with a cheerful smile of sympathy that even the worst case of “nerves” is frequently amenable to the seasonable aids of Aesculapius. Her smile, caught by the photographer and transmitted in this review, is as a ray of sunshine on a cloudy day. Only when she goes away on a vacation for a period of rest does she permit herself the luxury of a frown.