In case you’re wondering. The “H. C. OF L.” referred to in the blurb under the pictures of the goats stands for High Cost of Living. Apparently this was a common enough term that people could just use the abbreviation. Perhaps it’s time to bring it back. 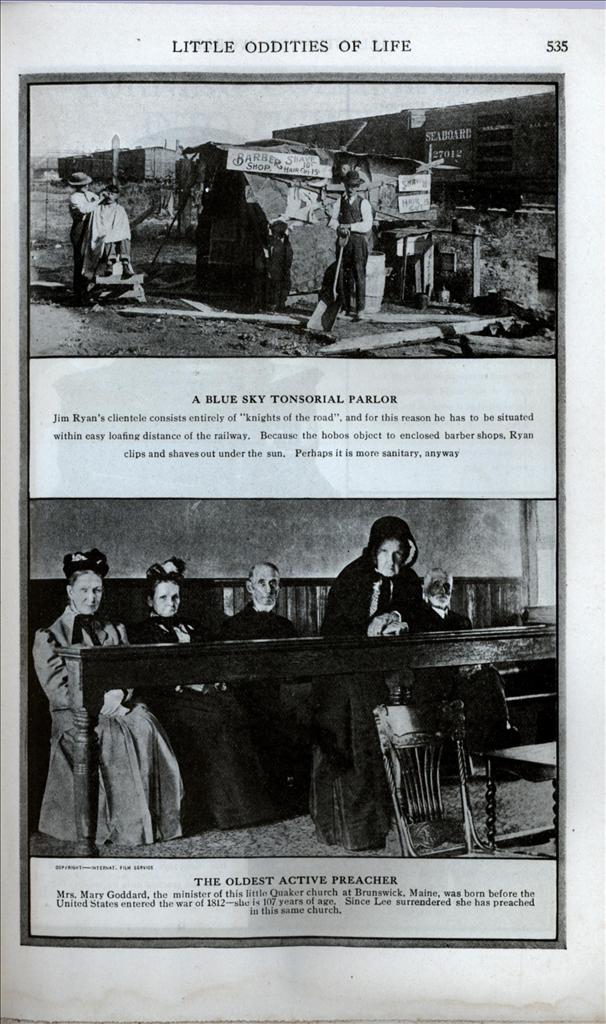 Not against Jess Willard, however. This time Bob has tackled even a sturdier and more wiry foe—His Satanic Majesty. Mr. Fitzsimmons has announced his intention of starting a career as an evangelist.

Here are “Bill”. “Hill”, “Will”, ‘Phil”, and John Smythe of Oklahoma. John has his back turned, but you may take our word for the fact that his face matches . What is your explanation of this extraordinary photograph?

When two automobiles suddenly seem to go crazy, whisking in and about each other, backing and jumping like no sane flivvers could act, haven’t the mechanics of the process interested you? Well it’s fairly simple. Each picture is taken separately. This enlargement shows one stunt that looks most convincing in the camera.

CONGO HAS MORE SENSE THAN SOME OF US

This baby hippopotamus of the Central Park Zoo, New York, has no desire to see circus life. Although he has been sold to such a concern, he refuses absolutely to desert his mother’s “apron strings” for the lure of the sawdust circle.

Near Manchester, New Hampshire, a certain N. J. Nassikes has started a large goat farm and dairy, purposing to enter into active competition with the bovine product. When a goat is milked, the hind legs must be held firmly, or an “accident” results.

This sentence, breathed distinctly, yet in a soft, musical tone, will be heard in the lobby of the McAlpin, New York City, soon. The management of this hotel believes that bellhops should “page” without becoming obtrusive or annoying, and in accordance with this belief has engaged Miss Edna Baily, an elocution teacher, to train the boys’ voices.

Marking the path of the padres between the Mission San Diego and Mission Sonoma, seven hundred miles north, are seven hundred of the oddest road signs in the United States. They are in the form of mission bells, such as hang in the belfries of those of the California missions which have withstood the wear and tear of time. The upright bearing the bell carries also a plate giving the name by which this path was known nearly a century and a half ago. El Camino Real—The King’s Highway—and also the distance to the nearest mission in each direction.

And a right royal road this is today since it has been made a part of one of two state highways running1 the length of California, one through the coast counties and one through the middle of the state. Most of it has already been paved and all of it will one day be, and even now El Camino Real is a Mecca for motorists who find a sentimental interest in the chain of missions, in ruins or restored, that show where the ruthless hand of civilization was first laid upon the aboriginal Americans on the Pacific Coast. The road as traveled by the Franciscan fathers connected their twenty-one missions, three pueblos and four presidios, the latter being the military establishments which were the secular contribution of ambitious Spanish colonizers toward the conquest of the Indian inhabitants. The photographs shown here were taken on the day that the connecting links of this modernized highway were completed and the bells raised to mark the event of opening the road.

Jim Ryan’s clientele consists entirely of “knights of the road”, and for this reason he has to be situated within easy loafing distance of the railway. Because the hobos object to enclosed barbershops, Ryan clips and shaves out under the sun. Perhaps it is more sanitary, anyway THE OLDEST ACTIVE PREACHER Mrs. Mary Goddard, the minister of this little Quaker church at Brunswick. Maine, was born before the United States entered the war of 1812—she is 107 years of age. Since Lee surrendered she has preached in this same church.

New Theory of the Universe

The Copernican idea is all wrong —we live, not on the outside of the earth but inside its hollow shell; the sun, moon and stars are all contained within this shell, which comprises all there is of the Universe. This is the remarkable theory propounded by a sect called the Koreshans, a theory which seems to be made plausible by a unique model now being exhibited in Washington. The maker is Mr. L. B. Webster, one of the leading men in the faith.

This model is a large, hollow glass globe. It represents the crust of the earth, the land and water being painted on the inside of the sphere. The configurations of the land and water of the world are correctly represented as if seen on the inside of the globe, so that to get a proper idea we must imagine ourselves viewing the concavity from a point inside its sides.

The Only Safe Place to Live

Strolling tigers, panthers, and other hungry wild animals make sleeping in a hut on the ground in the province of Assam, British India, a very risky proposition. The hut on the earth’s surface makes open doors and windows a necessity—even during the night the thermometer often registers well over one hundred degrees—and these are nothing but an invitation to all four-footed lovers of human flesh. In order to escape these perils, the ordinary living house in Assam is a “borang”, or tree bungalow. These are perched high, and reached only by ladders that can be drawn up at night.