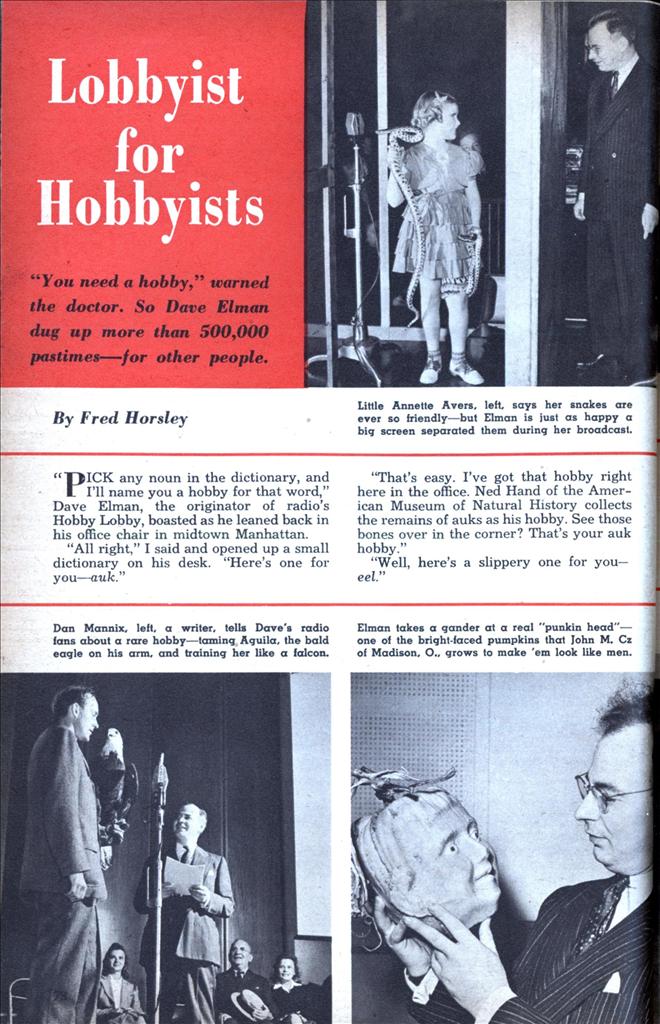 “You need a hobby,” warned the doctor. So Dave Elman dug up more than 500,000 pastimes—for other people.

“PICK any noun in the dictionary, and I’ll name you a hobby for that word,” Dave Elman, the originator of radio’s Hobby Lobby, boasted as he leaned back in his office chair in midtown Manhattan.

“All right,” I said and opened up a small dictionary on his desk. “Here’s one for you—auk.”

“That’s easy. I’ve got that hobby right here in the office. Ned Hand of the American Museum of Natural History collects the remains of auks as his hobby. See those bones over in the corner? That’s your auk hobby.”

“Know a guy down in Florida who makes a hobby of electric eels. Spends all his spare time trying to find out just how much voltage one of those shocking fish can put out.”

“That’s not bad so far, Dave, but who do you know that makes a hobby of eggshells?”

“Believe it or not, there’s a lady out in Milwaukee who makes lovely pictures out of eggshells. She saves all her broken shells, then arranges them on canvas in pretty pictures.”

“I don’t think anybody could do much with an old potato besides putting it in a pot. How about potato?”

Dave pulled his chubby chin a second, then grinned like a cherub.

“‘Got just the man for you. Louis Strakes, a former Manhattan restaurant man. carves faces from potatoes. Does a fine job, too.”

“Well, Dave, this one is going to spoil your perfect score—zero.”

“Zero’s a tough word but even on nothing I can give you something for a hobby. I had an Army officer from Fort Monmouth, N. J., on my show not long ago. His hobby was not merely zero but absolute zero. He was trying to find out whether he could get anything all the way down to zero cold. Theoretically, that’s minus 459.6 degrees Fahrenheit. He hadn’t quite made it yet. but he was having lots of fun trying.”

I was surprised that anyone could make good on such a fantastic boast. Later, when I found that Elman had carefully catalogued more than half a million hobbies in the overflowing files lining his big Madison Avenue offices, it was no longer so amazing that he could name a hobby for any noun you picked out of the dictionary. If Elman used all the hobby material he has stowed about his offices, he could keep running his weekly radio program for more than 400 years without ever repeating a single hobby.

As if he didn’t have enough hobbies already on hand, every week some 4000 hobbyists send him not only letters but samples of their hobbies, which may be anything from soap bubbles to bombs. Being a considerate fellow, he doesn’t want to throw away some item a hobbyist has spent years creating or collecting. Dave’s problem now is not finding hobbies but figuring what to do about all the material that keeps filling up his hobby warehouse and flooding him out of his home and his office.

In Elman’s 49 years on earth he has collected some 550,000 odds and ends from other people’s spare-time activity. Yet he . would gladly give away this entire collection just to have seven worn-out toothbrushes again. For these long-lost molar scrubbers marked his debut in show business.

When he was six, the “doctor” in a medicine show stopping in Fargo, N. D., picked Dave from the sidewalk audience to demonstrate a miraculous tooth-powder that cured everything from rheumatism to fallen arches. Because of Dave’s successful demonstration he was hired to be the model for the show’s seven-day stand. Elman says his payoff was seven battered toothbrushes and “the awfullest gob of penny candy you ever saw in your life.”

After doing a number of small parts in the local theater, he was told to quit the theater or leave school. At sixteen he finally left school for a tent show. He has been a professional entertainer ever since, playing everything from showboats to burlesque before he wound up behind a microphone.

In 1937 Dave’s oldest boy, eight-year-old Jackie, suddenly died of pneumonia. For two weeks he was too upset by his grief to concentrate on anything but the tragedy of his loss. Finally Dave’s doctor told him he would lose his mind if he didn’t pull himself together. The doctor urged him to throw himself into a hobby.

“I went home and got out a book on hobbies,” Dave recalled. “I tried to skim through the first chapters, but I found my mind wandering again. The book was all about stamps, coins and the usual prosaic collecting hobbies. I got so disgusted with the boring stuff, I threw the book against the wall and swore I could dig up more interesting hobbies myself. I used to clip newspaper items that caught my fancy and put them in scrapbooks. I remembered seeing a story about a man whose hobby was angle worms. I started going through the old clippings. Next thing I knew, it was six hours later and I still hadn’t found the angle worm piece. Then I realized that for the first time since my son’s death, I had been absorbed in what I was doing—and that I had found my own hobby in other people’s hobbies.”

The following day Elman began hunting in earnest for newspaper and magazine stories about people with remarkable hobbies. The New York Times and the Herald Tribune gave him permission to search their morgues for more clues to absorbing pastimes. When he had collected some 300 stories on outstanding hobbyists, he got the idea for a radio program.

“I wanted a show that would stimulate the spare-time activities of others so that their lives would be fuller, richer and more meaningful. I wanted to put on that show real, normal people who were enriching their lives with purposeful but fun-producing hobbies—and I wanted to pass on their hobbies to others. That’s how Hobby Lobby started—with each hobbyist lobbying for his own hobby.”

After a tryout on WOR. Hobby Lobby soon changed from an experimental sustaining program to a nationwide commercial feature. Hobby Lobby became the first successful hobby show, although more than 500 had been tried and found wanting.

To make up a show, Elman and his staff screen the most likely letters in his weekly mail and check the office files for seven or eight unusual but varied hobbyists. After he has made a selection, he phones or wires the hobbyists and has them come to New York as his guests, at his expense.

The hobbies for which Dave lobbies on the air range from serious and profitable pastimes to such amusing trivialities as organizing a Union for Abused Husbands, or dreaming up a Rube Goldberg machine for pulling up pants.

But whether the hobby is silly or serious, Dave’s radio audiences seem to have almost as much fun as the hobbyists. His Hooper rating has been as high as 17. That means his listeners were estimated at more than 17,000,-000. His transcribed programs are rebroadcast not only in Canada but even in faraway Africa.

A lot of queer hobbies give satisfaction to no one but the hobbyist, who doesn’t think his particular avocation strange at all. Take Mrs. J. B. Clopton, an Alabama schoolteacher, who paints on cobwebs. She got the idea from reading about an European family who did that delicate artwork. It took Mrs. Clopton two years and several hundred webs to produce her first picture on a cobweb. She exhibited 17 of them to the studio audience, however, when she appeared on Hobby Lobby. According to Dave, those cobweb landscapes and portraits were really beautiful.

Annette Avers was a nice little girl in Portage, Wis. Like other nice little girls in her home town, she sometimes went to the store on errands for her mother. One day when Annette went to the grocery, however, her appearance nearly caused a riot. For on the end of her leash was not a playful puppy but an all too-serious-looking six-foot rattlesnake.

She was a little surprised at all the excitement because, after all, the big rattler was only her favorite pet, Elmer. He had even helped her learn to swim by letting her hang on to his tail as he wiggled through the water. Her father had given Annette her first snake on her very first birthday—not a rattler then but a harmless fox snake. She had loved snakes ever since. In 1940, when she was seven, she appeared on the Hobby Lobby with both hands full of her pets. Before that show, however, Dave took the precaution of building a stout screen between himself and little Annette with her snakes.

Hobbies often mean money as well as fun, as a lot of people on Dave’s show have demonstrated. That profit angle interests almost everybody—that goes for Dave, and me, too.

Blowing square soap bubbles sounds like one of Major Hoople’s goofier projects. Wallace Block of Buffalo, N. Y., who owns a photographic laboratory, claims such wacky bubbling is a practical commercial business. He blows triangular, cylindrical and square bubbles by using a special wire hoop or frame which he dips in the soap solution.

“These goemetrical soap bubbles, Mr. El-man, serve a very good purpose,” Block told Dave before the mike. “They’re used to test the explosive quality of gases. In laboratories they fill a soap bubble with gas, light it, and it explodes. If they used glass, it would shatter and that would be dangerous. But no one has ever been injured by a bursting soap bubble.”

Sometimes Dave comes across a man whose hobby is his fellowman. Such a hobbyist is Admiral Richard E. Byrd, the noted polar explorer. He appeared on Dave’s program to explain why he, an Admiral of the Navy, made a hobby of promoting world peace.

During his second Antarctic expedition, Byrd was alone for six months at the world’s most southerly outpost. There in the loneliness and darkness of the polar night he was poisoned by the fumes from a faulty stove. Death seemed inevitable as he lay helpless in his tiny shack beneath the snow. He thought of the world and its many troubles. He became convinced that war was the greatest folly of mankind. He solemnly resolved that if he lived through this ordeal he would devote all his energy to the cause of peace.

“When the great masses of the people of the world fully comprehend why another general war would end our civilization,” Admiral Byrd declared on Hobby Lobby, “I believe they will do something about it. . . the people of the world are 200 to 1 against war . . . the force for peace is the greatest force in the world … no nation can for long stand the unified condemnation of the world . . . From a practical standpoint, no nation could afford to be put into Coventry by the world …. And it can be done without bloodshed.”

But even with Dave’s best lobbying for the peace-loving Admiral, he couldn’t put over his hobby. For that program took place more than ten years ago—-on the brink of World War II.

Dave keeps on encouraging hobbyists, though, whether they are idealists like the Admiral or practical gagsters like the inventor of the pants-puller-upper. He even encourages his own personal pastimes whenever he gets a chance—fishing for marlin in the deep sea, or trout in the lakes—or playing around with photography. Last year he helped the neighborhood kids in St. Albans, Long Island, become sharp shutterbugs and junior geniuses in the darkroom. Dave’s real hobby, however, is neither fishing nor photography but playing lobbyist for other people’s hobbies. As the signature on his broadcast puts it: “Hello . .. Who? Hobby Lobby? It’s for you, ladies and gentlemen—it’s for you!”‘