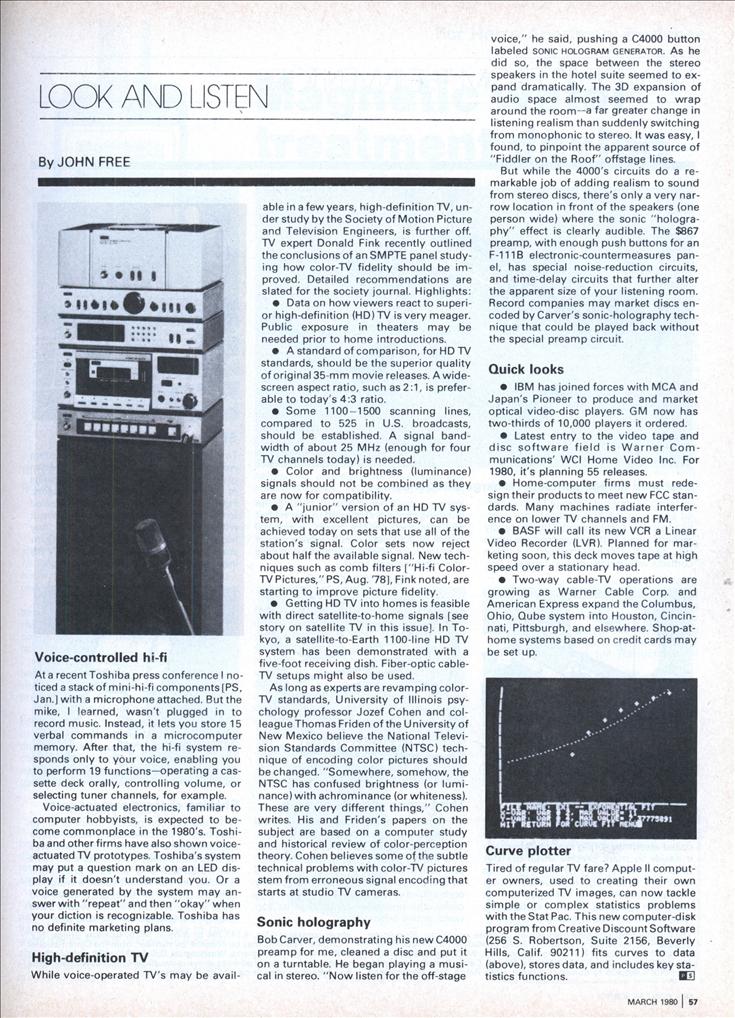 At a recent Toshiba press conference I noticed a stack of mini-hi-fi components [PS, Jan.] with a microphone attached. But the mike, I learned, wasn’t plugged in to record music. Instead, it lets you store 15 verbal commands in a microcomputer memory. After that, the hi-fi system responds only to your voice, enabling you to perform 19 functions—operating a cassette deck orally, controlling volume, or selecting tuner channels, for example.

Voice-actuated electronics, familiar to computer hobbyists, is expected to become commonplace in the 1980’s. Toshiba and other firms have also shown voice-actuated TV prototypes. Toshiba’s system may put a question mark on an LED display if it doesn’t understand you. Or a voice generated by the system may answer with “repeat” and then “okay” when your diction is recognizable. Toshiba has no definite marketing plans.

While voice-operated TV’s may be avail- able in a few years, high-definition TV. under study by the Society of Motion Picture and Television Engineers, is further off. TV expert Donald Fink recently outlined the conclusions of an SMPTE panel studying how color-TV fidelity should be improved. Detailed recommendations are slated for the society journal. Highlights:
• Data on how viewers react to superior high-definition (HD) TV is very meager. Public exposure in theaters may be needed prior to home introductions.

• A standard of comparison, for HD TV standards, should be the superior quality of original 35-mm movie releases. A wide-screen aspect ratio, such as 2:1, is preferable to today’s 4:3 ratio.

• Some 1100-1500 scanning lines, compared to 525 in U.S. broadcasts, should be established. A signal bandwidth of about 25 MHz (enough for four TV channels today) is needed.

• Color and brightness (luminance) signals should not be combined as they are now for compatibility.

• A “junior” version of an HD TV system, with excellent pictures, can be achieved today on sets that use all of the station’s signal. Color sets now reject about half the available signal. New techniques such as comb filters [“Hi-fi Color-TV Pictures,” PS, Aug. 78], Fink noted, are starting to improve picture fidelity.

• Getting HD TV into homes is feasible with direct satellite-to-home signals [see story on satellite TV in this issue]. In Tokyo, a satellite-to-Earth 1100-line HD TV system has been demonstrated with a five-foot receiving dish. Fiber-optic cable-TV setups might also be used.

As long as experts are revamping color-TV standards, University of Illinois psychology professor Jozef Cohen and colleague Thomas Friden of the University of New Mexico believe the National Television Standards Committee (NTSC) technique of encoding color pictures should be changed. “Somewhere, somehow, the NTSC has confused brightness (or luminance) with achrominance (or whiteness). These are very different things,” Cohen writes. His and Friden’s papers on the subject are based on a computer study and historical review of color-perception theory. Cohen believes some of the subtle technical problems with color-TV pictures stem from erroneous signal encoding that starts at studio TV cameras.

Bob Carver, demonstrating his new C4000 preamp for me, cleaned a disc and put it on a turntable. He began playing a musical in stereo. “Now listen for the off-stage voice,” he said, pushing a C4000 button labeled sonic hologram generator. As he did so, the space between the stereo speakers in the hotel suite seemed to expand dramatically. The 3D expansion of audio space almost seemed to wrap around the room—a far greater change in listening realism than suddenly switching from monophonic to stereo. It was easy, I found, to pinpoint the apparent source of “Fiddler on the Roof” offstage lines.

But while the 4000’s circuits do a remarkable job of adding realism to sound from stereo discs, there’s only a very narrow location in front of the speakers (one person wide) where the sonic “holography” effect is clearly audible. The $867 preamp, with enough push buttons for an F-111B electronic-countermeasures panel, has special noise-reduction circuits, and time-delay circuits that further alter the apparent size of your listening room. Record companies may market discs encoded by Carver’s sonic-holography technique that could be played back without the special preamp circuit.

• IBM has joined forces with MCA and Japan’s Pioneer to produce and market optical video-disc players. GM now has two-thirds of 10,000 players it ordered.

• BASF will call its new VCR a Linear Video Recorder (LVR). Planned for marketing soon, this deck moves tape at high speed over a stationary head.

• Two-way cable-TV operations are growing as Warner Cable Corp. and American Express expand the Columbus, Ohio, Qube system into Houston, Cincinnati, Pittsburgh, and elsewhere. Shop-at-home systems based on credit cards may be set up.