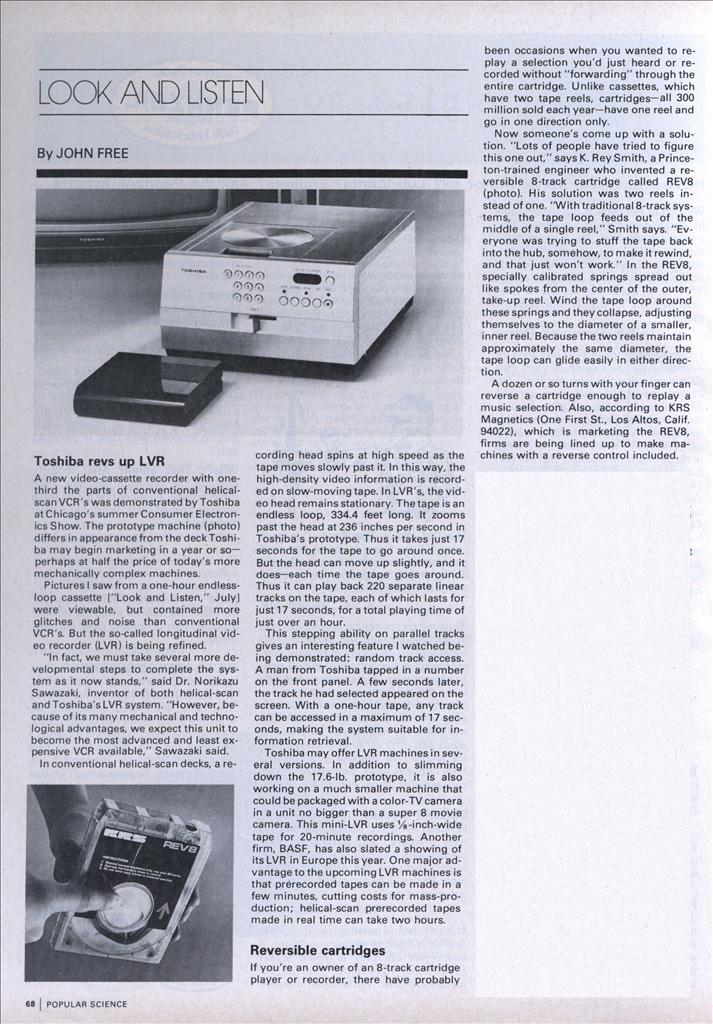 A new video-cassette recorder with one-third the parts of conventional helical-scan VCR’s was demonstrated by Toshiba at Chicago’s summer Consumer Electronics Show. The prototype machine (photo) differs in appearance from the deck Toshiba may begin marketing in a year or so— perhaps at half the price of today’s more mechanically complex machines.

Pictures I saw from a one-hour endless-loop cassette [“Look and Listen,” July] were viewable, but contained more glitches and noise than conventional VCR’s. But the so-called longitudinal video recorder (LVR) is being refined.

“In fact, we must take several more developmental steps to complete the system as it now stands,” said Dr. Norikazu Sawazaki, inventor of both helical-scan and Toshiba’s LVR system. “However, because of its many mechanical and technological advantages, we expect this unit to become the most advanced and least expensive VCR available,” Sawazaki said.

In conventional helical-scan decks, a re- cording head spins at high speed as the tape moves slowly past it. In this way, the high-density video information is recorded on slow-moving tape. In LVR’s, the video head remains stationary. The tape is an endless loop, 334.4 feet long. It zooms past the head at 236 inches per second in Toshiba’s prototype. Thus it takes just 17 seconds for the tape to go around once. But the head can move up slightly, and it does—each time the tape goes around. Thus it can play back 220 separate linear tracks on the tape, each of which lasts for just 17 seconds, for a total playing time of just over an hour. This stepping ability on parallel tracks gives an interesting feature I watched being demonstrated: random track access. A man from Toshiba tapped in a number on the front panel. A few seconds later, the track he had selected appeared on the screen. With a one-hour tape, any track can be accessed in a maximum of 17 seconds, making the system suitable for information retrieval.

Toshiba may offer LVR machines in several versions. In addition to slimming down the 17.6-lb. prototype, it is also working on a much smaller machine that could be packaged with a color-TV camera in a unit no bigger than a super 8 movie camera. This mini-LVR uses 1/8-inch-wide tape for 20-minute recordings. Another firm, BASF, has also slated a showing of its LVR in Europe this year. One major advantage to the upcoming LVR machines is that prerecorded tapes can be made in a few minutes, cutting costs for mass-production; helical-scan prerecorded tapes made in real time can take two hours.

If you’re an owner of an 8-track cartridge player or recorder, there have probably been occasions when you wanted to replay a selection you’d just heard or recorded without “forwarding” through the entire cartridge. Unlike cassettes, which have two tape reels, cartridges—all 300 million sold each year—have one reel and go in one direction only.

Now someone’s come up with a solution. “Lots of people have tried to figure this one out,” says K. Rey Smith, a Princeton-trained engineer who invented a reversible 8-track cartridge called REV8 (photo). His solution was two reels instead of one. “With traditional 8-track systems, the tape loop feeds out of the middle of a single reel,” Smith says. “Everyone was trying to stuff the tape back into the hub, somehow, to make it rewind, and that just won’t work.” In the REV8, specially calibrated springs spread out like spokes from the center of the outer, take-up reel. Wind the tape loop around these springs and they collapse, adjusting themselves to the diameter of a smaller, inner reel. Because the two reels maintain approximately the same diameter, the tape loop can glide easily in either direction.

A dozen or so turns with your finger can reverse a cartridge enough to replay a music selection. Also, according to KRS Magnetics (One First St., Los Altos, Calif. 94022), which is marketing the REV8, firms are being lined up to make machines with a reverse control included.