Yes, now you too can cook eggs on a flying disk! 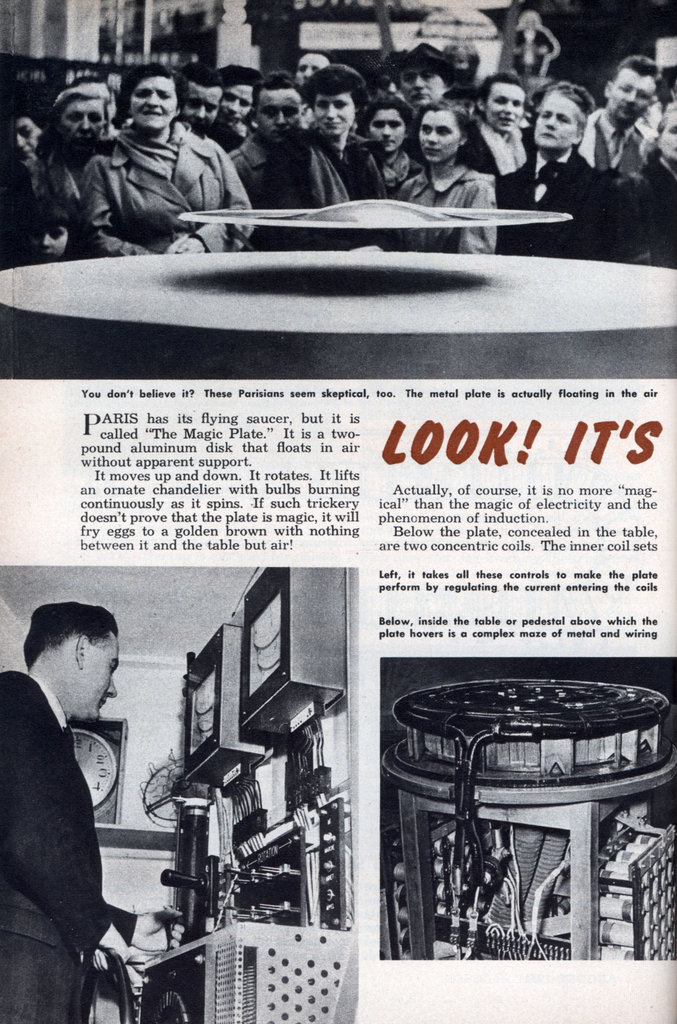 PARIS has its flying saucer, but it is called “The Magic Plate.” It is a two-pound aluminum disk that floats in air without apparent support.

It moves up and down. It rotates. It lifts an ornate chandelier with bulbs burning continuously as it spins. If such trickery doesn’t prove that the plate is magic, it will fry eggs to a golden brown with nothing between it and the table but air!

Actually, of course, it is no more “magical” than the magic of electricity and the phenomenon of induction.

Below the plate, concealed in the table, are two concentric coils. The inner coil sets up a magnetic field that repels the tray, forcing it into the air. To keep the tray from slipping sideways out of the lifting field, a large outer coil is used. This develops a conical field, tapering toward the top, to keep the plate centered.

A third field makes the disk rotate. Four coils create it. Once the tray starts spinning, it does so for a long period even after the rotation coils are turned off because the drag of friction is almost nonexistent.

The chandelier weighs one pound. Its bulbs are lighted by induced current. The aluminum tray gets hotter than an ordinary electric iron, providing ample heat for egg frying.

What’s it all for? It is strictly a stunt used in Parisian store windows to attract customers and impress them with the magic of electricity.