Reading this ad sure takes me back. I know that the first thing I think about when I remember the seventies is the Fairchild F-8 microprocessor. Doesn’t everybody? 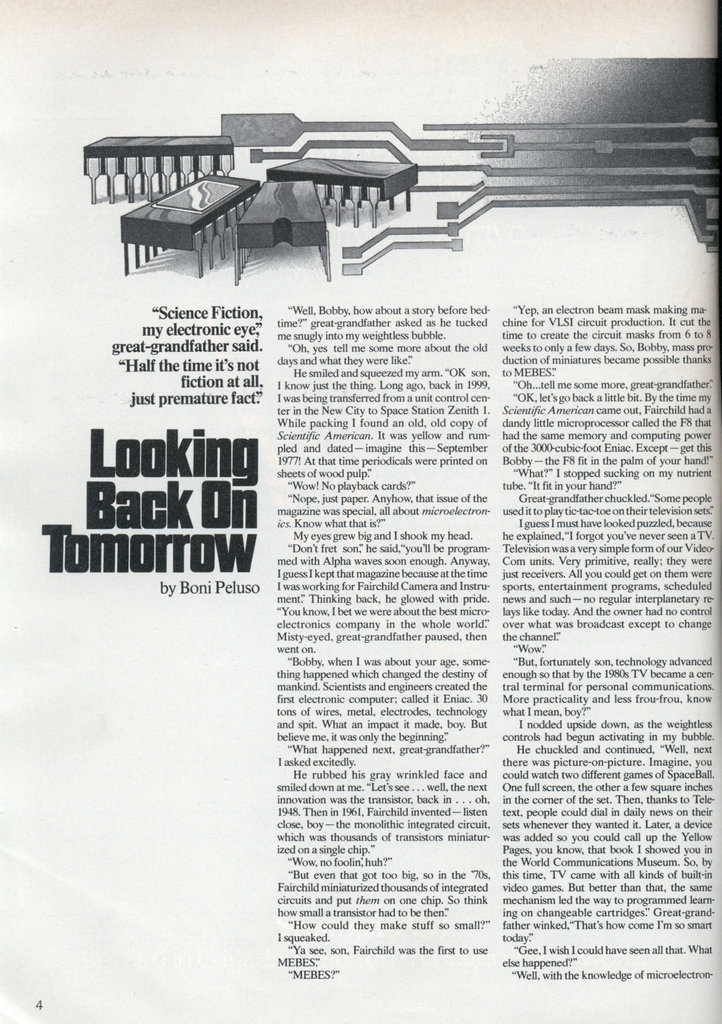 Looking Back On Tomorrow

“Science Fiction, my electronic eye.” great-grandfather said.
“Half the time it’s not fiction at all, just premature fact.”

“Well, Bobby, how about a story before bedtime?” great-grandfather asked as he tucked me snugly into my weightless bubble.

“Oh, yes tell me some more about the old days and what they were like.”

He smiled and squeezed my arm. “OK son, I know just the thing. Long ago, back in 1999, I was being transferred from a unit control center in the New City to Space Station Zenith 1. While packing I found an old, old copy of Scientific American. It was yellow and rumpled and dated â€” imagine thisâ€”September 1977! At that time periodicals were printed on sheets of wood pulp!’ “Wow! No playback cards?”

“Nope, just paper. Anyhow, that issue of the magazine was special, all about microelectronics. Know what that is?”

My eyes grew big and I shook my head.

“Don’t fret son” he said,”you’ll be programmed with Alpha waves soon enough. Anyway, I guess I kept that magazine because at the time I was working for Fairchild Camera and Instrument!’ Thinking back, he glowed with pride. “You know, I bet we were about the best microelectronics company in the whole world!’ Misty-eyed, great-grandfather paused, then went on.

“Bobby, when I was about your age, something happened which changed the destiny of mankind. Scientists and engineers created the first electronic computer; called it Eniac. 30 tons of wires, metal, electrodes, technology and spit. What an impact it made, boy. But believe me, it was only the beginning.”

“What happened next, great-grandfather?” I asked excitedly.

He rubbed his gray wrinkled face and smiled down at me. “Let’s see … well, the next innovation was the transistor, back in . . . oh, 1948. Then in 1961, Fairchild inventedâ€”listen close, boy â€” the monolithic integrated circuit, which was thousands of transistors miniaturized on a single chip.”

“But even that got too big, so in the 70s, Fairchild miniaturized thousands of integrated circuits and put them on one chip. So think how small a transistor had to be then.”

“How could they make stuff so small?” I squeaked.

“Ya see, son, Fairchild was the first to use MEBES,”

“Yep, an electron beam mask making machine for VLSI circuit production. It cut the ] time to create the circuit masks from 6 to 8 weeks to only a few days. So, Bobby, mass production of miniatures became possible thanks to MEBES.” “Oh…tell me some more, great-grandfather.”

“OK, let’s go back a little bit. By the time my Scientific American came out, Fairchild had a dandy little microprocessor called the F8 that had the same memory and computing power of the 3000-cubic-foot Eniac. Except â€” get this Bobby â€”the F8 fit in the palm of your hand!”

“What?” I stopped sucking on my nutrient tube. “It fit in your hand?”

Great-grandfather chuckled.”Some people used it to play tic-tac-toe on their television sets? I guess I must have looked puzzled, because he explained, “I forgot you’ve never seen a TV. Television was a very simple form of our Video-Corn units. Very primitive, really; they were just receivers. All you could get on them were sports, entertainment programs, scheduled news and such â€” no regular interplanetary relays like today. And the owner had no control over what was broadcast except to change the channel.”

“Wow: “But, fortunately son, technology advanced enough so that by the 1980s TV became a central terminal for personal communications. More practicality and less frou-frou, know what I mean, boy?”

I nodded upside down, as the weightless controls had begun activating in my bubble.

He chuckled and continued, “Well, next there was picture-on-picture. Imagine, you could watch two different games of SpaceBall. One full screen, the other a few square inches in the corner of the set. Then, thanks to Teletext, people could dial in daily news on their sets whenever they wanted it. Later, a device was added so you could call up the Yellow Pages, you know, that book I showed you in the World Communications Museum. So, by this time, TV came with all kinds of built-in video games. But better than that, the same mechanism led the way to programmed learning on changeable cartridges.” Great-grandfather winked, “That’s how come I’m so smart today.”

“Gee, I wish I could have seen all that. What else happened?”

“Well, with the knowledge of microelectronics, scientists began miniaturizing everything. They had computers no bigger than my thumb, little TV communicators the size of a wallet and rocket guidance systems no bigger than an alarm clock.”

“No kidding!” I dropped my body regulator in amazement.

“Really. Then, finally, some smart cookie of a scientist combined the TV, telephone and computerâ€”shoved them into an old cigar box, stuck a holoscope on top and voila! The first VideoCom unit. You couldn’t run them with brain waves or anything,” great-grandfather sniffed, “but it was another step in scientific advancement.”

He grew quiet suddenly and a faraway look came over him. “Gosh, all this talk about TV reminds me of a program I used to watch during my Fairchild days. It was about this man who had been in a terrible accident, but was miraculously rebuilt, mostly from electronic parts. I thought it was just science fiction, until a decade later the very same technology restored my eyes and most of my other vital organs. Science fiction, my electronic eye! Half the time it’s not fiction at all, just premature fact!” Afraid great-grandfather was about to shut down for the night, I said, ‘Tell me some more about energy and computers and stuff.’ “Oh, all right.” he laughed. “You know that energy controller in your mother’s room? It was first developed in 1985. Back in those days, people were still using natural gas and Type I electricity for power, but resources were running out fast. Not to mention the environment. So your home minicomputer was developed to control the use of energy, which gave science enough time to get the Nucleosolar System operational. The first home computer couldn’t even fit in a breadbox. Now it’s about the size of a half-dollar.

“Let me see, what else…oh, yeah. About the same time, people used to travel 30 to 40 miles to work just to sit at a desk. But electronics made it possible for them to receive the office at home on their VideoCom units, which, by then, were collecting business and personal data of all types. Isn’t it great, Bobby, what microelectronics have done for us?”

I floated and smiled in agreement. I could tell great-grandfather was proud of the tremendous contribution he and Fairchild had made to electronics. Well … it seemed like pride. Deep down I thought androids couldn’t really feel emotion, but this one great-grandfather had programmed with his own memory bank. It was just like having him with me.

We discussed a few more inventions, then looking at his antique Fairchild LCD watch, he jumped and gasped in mock surprise.” My boy, it seems that it’s way past your bedtime!’ “But what about microelectronics stories?” I asked.

He smiled at me. “Well, how about if I take you to the Electronics Pavilion tomorrow?” “Oh, boy! Really?”

He nodded and, as he dimmed the lights, I settled down for sleep, thinking of all the ancient electronic miracles I would see â€” like the Fairchild F8 Microprocessor.

Gee, I wonder if they’d let me hold it in my hand?