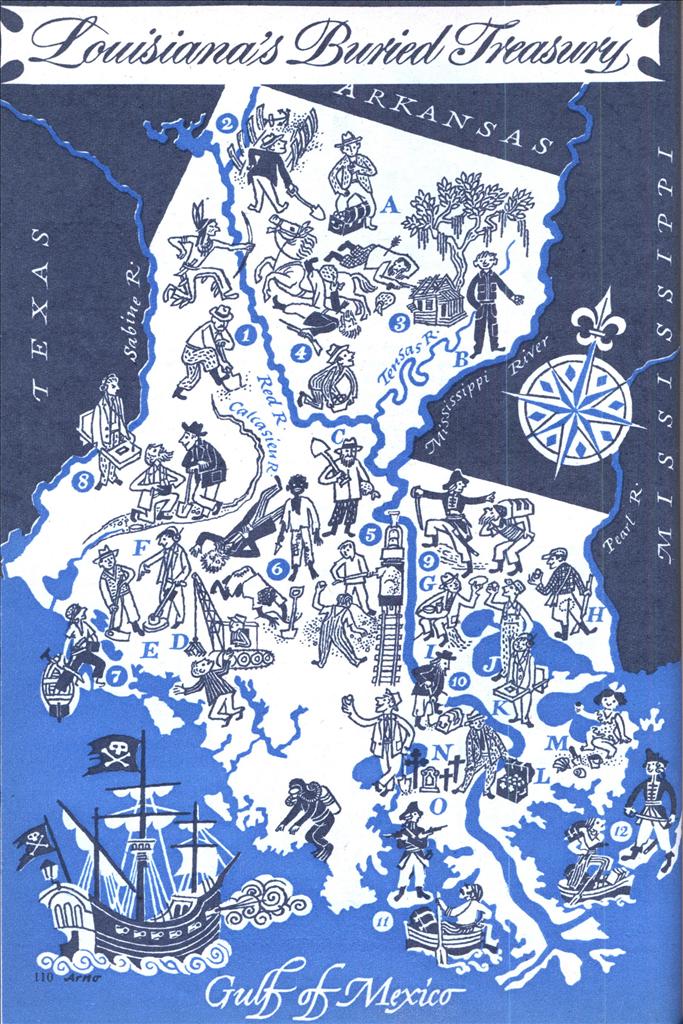 Legends are many of the Bayou state’s buried treasure but facts prove it’s there, waiting to be taken out.

THERE are so many legends of buried gold in Louisiana that it would seem all the would-be treasure hunter had to do was pick up a shovel and start to dig. Sadly enough all these tales aren’t true. If they were, there wouldn’t be room beneath the Bayou State for much else.

But the encouraging fact is that at least some of the many buried treasure tales are fact. Perhaps 30 all told. The problem is which 30 are worth investigating?

For example: Who can say with any degree of certainty that Jean Lafitte, pirate king of kings who made his headquarters at Grand Isle off the Gulf Coast, didn’t leave much of his loot there or along the Mississippi bluffs near Baton Rouge?

Lafitte had three islands that are still believed to be the best locales for a serious search. Besides Grand Isle (also a base for Henry Morgan) Lafitte often landed at Coca Island and $1,000,000 in gold is said to be buried on Kelso’s Island. The pirate is also believed to have left at least $11,000,000 in gold along the South Louisiana coast and in the Mississippi bluffs.

Rumors have been persistent for decades that all these would be good sites for a treasure hunt. And when author Ben Luien Burman went into the South Louisiana swamps to write a fur-trapping story, two men at Barataria Bay were pointed out to him as discoverers of part of Lafitte’s loot.

“Ain’t done a lick of work in their lives. Everybody knows it’s because they found where Lafitte’s money was buried,” Burman was told.

However, like most of the other tales, the story of Lafitte’s caches in the levees and swamps are hard to track down—largely because treasure finders are a notoriously close-mouthed lot.

But the stories can’t be dismissed easily. Lafitte wasn’t in the pirate business just to wear a cutlass and swagger. Even if it is possible that most of his loot has been discovered, scores of other finds have been made in Louisiana.

George Maher, Jr., and his father for example, are reported to have found more than $200,000 in old coins, jewelry and silverware in Louisiana with a patented machine they call the Ground Radio.

This device, an invention of the father-son team, operates via the variable induction of a magnetic field and has a strange affinity for locating buried treasure, the Mahers claim.

A farmer in Avoyelles Parish (county) who was plowing in his fields one day stumbled on an iron pot filled with 1,000 gold pieces.

In 1929, 21 Spanish doubloons were found in a load of gravel at the Louisiana and Arkansas Railroad tracks in Baton Rouge.

And a farmer named John Skinner, who lived near Ruston in North Louisiana, fell over a box which yielded nearly 1,000 gold coins while plowing his fields.

The second largest find in Louisiana history was made at Gretna by a group of men who were searching for treasure, not farming. They unearthed $65,000.

A vocal minority of Louisiana treasure seekers believed another pirate, Pierre Rameau, whose operating base on Honey Island has already paid off handsomely, is still the best locale for a search. Bordering Louisiana and Mississippi on the Pearl River, “Rameau’s Kingdom” yielded an iron chest filled with $1,000 worth of coins.

Connoisseurs of treasure tales also rank Honey Island high because latter-day pirates, fugitives from the law during the 1880’s, found the island an ideal out-of-the-way place.

In 1929, one of the richest treasure strikes in history was made on the dry bed of the Calcasieu River. The take was $75,000 in coins.

The lost world of Louisiana in Tensas Parish, pre-Civil War home of Col. Norman Frisbee on the Tensas River, is a prime inland treasure-hunting site now being explored again.

Frisbee, who lived vividly and died violently in a knife fight, laid the foundations and built the walls and pillars of a magnificent mansion eight miles up-river from Flower’s Landing. He was one of the world’s great landowners, with 52 miles of river-front and 12,000 acres planted in cotton.

When the plantation baron died, he left only the memory of a day shortly before Union soldiers came when he went into the forests near his home with two slaves and wagonload of gold.

The slaves who accompanied Frisbee were killed and none of the Tensas treasure has ever been found. Descendants of the Tensas king have scanned maps over the years. Four years ago, two young Frisbees led an expedition to the old plantation but the party was ill-equipped and only scratched the surface.

The residents of Natchitoches Parish in Northwest Louisiana haven’t been so casual about the search for a trove that is estimated at $9,000,000 to $30,000,000. For more than 30 years, fortune seekers have been sinking holes in the ground at points near old Camp Salubrity, a bivouac area during the Civil War.

Unlike Florida, which has a complicated system of permits, Louisiana is easy-going, perhaps because treasure-hunters rarely bother to let state officials know they’re looking for buried and sunken wealth on the lands and in the waters of Louisiana.

For permission to search on state lands and information about state property, the treasure-hunter should work through the office of Register of the State Land Office, Ellen By ran Moore, in Baton Rouge. General information on maps, histories of the plantations and pirates can be obtained from the Louisiana Department of Commerce and Industry in Baton Rouge.

The law that sets forth the rights of property owners runs: “Although a treasure be not of the number of things which are lost or abandoned or which never belonged to anybody, yet he who finds it on his own land or on land belonging to nobody acquires the entire ownership of it; and should such treasure be found on the land of another, one-half of it shall belong to the finder and the other half to the owner of the soil.”

At least 1,000 possible treasure sites have been rumored in Louisiana and even scholarly state historians agree that several locales offer excellent possibilities for treasure-seekers.

Where are the best sites to look for treasure ?

A planter near Hubbardville buried his money and silver plate outside the town before the Civil War; the ruins of the old fort at Barataria yielded a box containing doubloons and earrings; $300,000 is believed to have been buried at Parlange Plantation in Pointe Coupee Parish; last summer, two Tulane students took a mine detector to the barren site of Fort de la Boulaye 38 miles down the Mississippi from New Orleans—and what they found led them to believe French gold would be discovered there.

The old bed of the Red River near Dixie, the “Lost Mine of Wyndham Creek,” an Indian mound near the highway between Convent and Lutcher—all might pay dividends to anyone who makes an all-out effort to tap the fabulous buried treasure of the Bayou State.