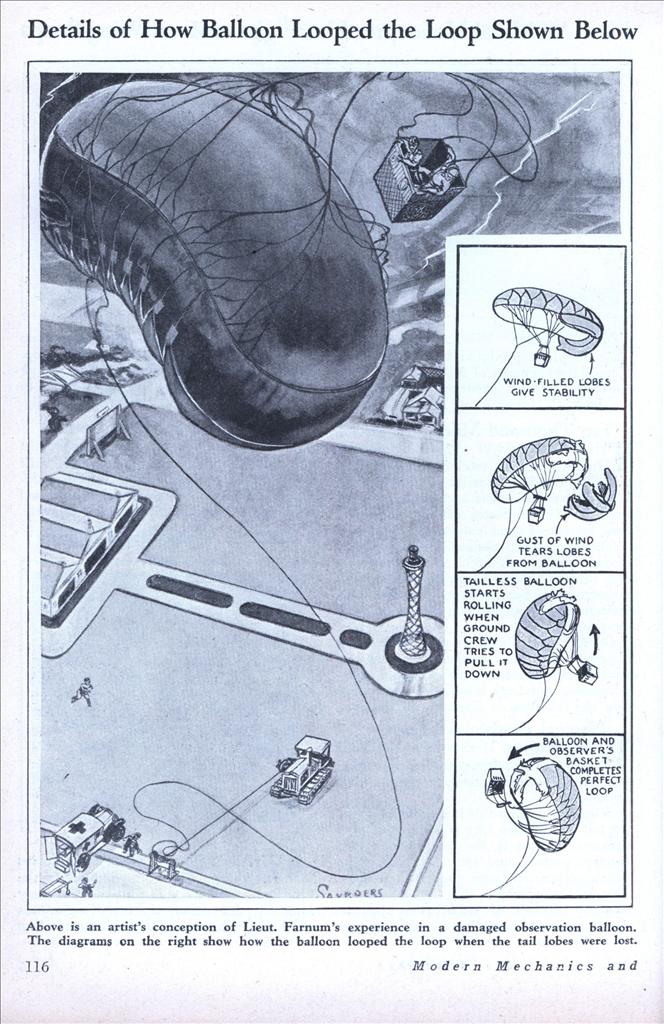 Looping the Loop in a Balloon

Air Corps, U. S. Army Aviation history records only one instance of a balloon looping the loop. Lieut, Farnum tells here the story of his aerial somersaults.

WATCHING an airplane loop the loop always reminds me of a morning 12 years ago when I was a flying cadet at Fort Omaha in the balloon service, waiting for my commission and instructing student officers in balloon observation. This particular morning I was to ascend 3,000 feet and instruct a student in observation. I checked the balloon and gave the order.

The type M balloon which we occupied is a sausage-shaped bag holding 35,000 cubic feet of hydrogen gas. It has three lobes in the rear which fill with wind and give stability. Without them the balloon is like a kite without a tail. The basket hangs about 30 feet below the bag, suspended by a series of ropes. Another series of ropes in front of the bag connects with the cable which holds the balloon to the ground. As the windlass played out the cable and we rose at about 200 feet per minute, trouble was the thing farthest from our thoughts.

All of a sudden the balloon was jerked tremendously down wind. We heard a report like a cannon and our tail was carried awayâ€”it had entered a strata of strong wind and the interior rigging that holds the lobes in conformation had parted, allowing them to tear away. Well, away we went in a long dive, bringing up at the end of the cable with a jerk, and the basket swung out to the side and clear over the top and down again, a perfect loop. The cable snubbed us and another loop resulted. I knew this was no place for us. We had parachutes for such an emergency. We prepared to jump but found both packs tangled all up in the handling ropes.

Then I grabbed the valve cord and released enough gas to drop us down wind where the cable had a more angular pull to the ground. I knew the ground crew was helpless to pull us in against that wind. As I was swinging on the valve a final dive threw the basket through the forward suspension on the cable and this pulled our tail down so that the rest of our gyrations consisted of long dives with abrupt pull-ups, no more loops. By this time the crew had rigged a maneuvering spider and were hauling us down slowly by hand. As we approached the ground I climbed up in the rigging and grabbed the rip-cord and as we were dashing from side to side close to the ground, I ripped the bag and we dropped into the arms of our waiting comrades.

I learned on landing that our whole trip consumed fifty minutes. I got three broken ribs, a broken nose and broken fingerâ€”and the worst scare I ever want!