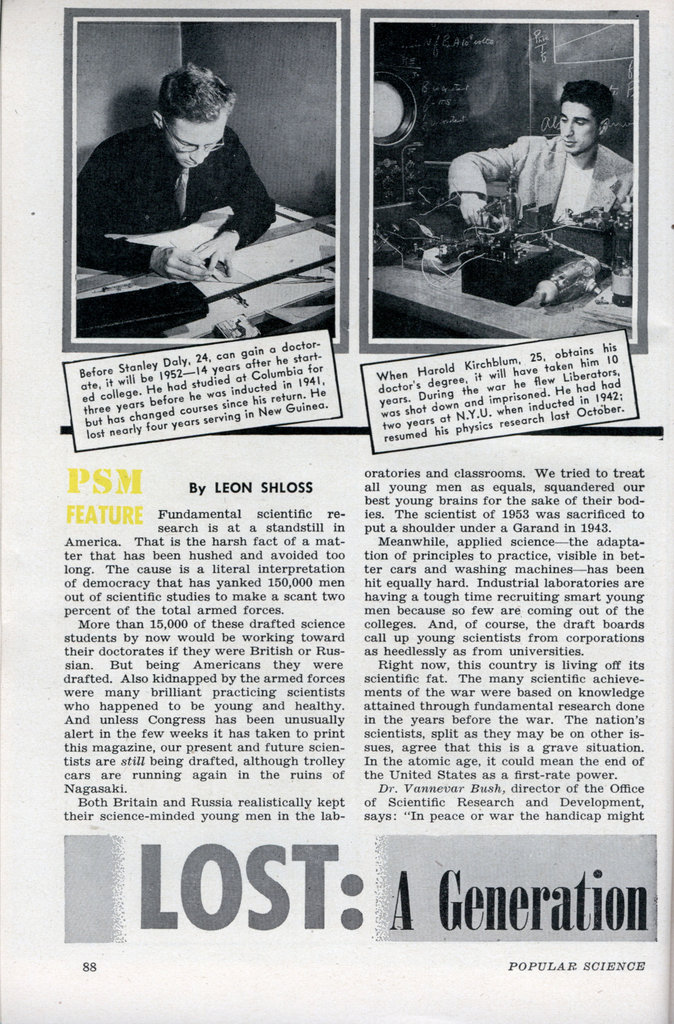 Both Britain and Russia realistically kept their science-minded young men in the laboratories and classrooms. We tried to treat all young men as equals, squandered our best young brains for the sake of their bodies. The scientist of 1953 was sacrificed to put a shoulder under a Garand in 1943.

Meanwhile, applied scienceâ€”the adaptation of principles to practice, visible in better cars and washing machinesâ€”has been hit equally hard. Industrial laboratories are having a tough time recruiting smart young men because so few are coming out of the colleges. And, of course, the draft boards call up young scientists from corporations as heedlessly as from universities.

Right now, this country is living off its scientific fat. The many scientific achievements of the war were based on knowledge attained through fundamental research done in the years before the war. The nation’s scientists, split as they may be on other issues, agree that this is a grave situation. In the atomic age, it could mean the end of the United States as a first-rate power.

Dr. Vannevar Bush, director of the Office of Scientific Research and Development, says: “In peace or war the handicap might prove fatal to our standards and to our way of life.”

Dr. Harvey N. Davis, president of Stevens Institute of Technology, says: “Obviously we shall never have even such precarious security as armed preparedness can give unless our technically trained civilian personnel is more numerous and able than that of any possible aggressor.”

Rear Admiral Lawrence B. Richardson, assistant chief of the Navy’s Bureau of Aeronautics, says: “Fundamental research in aeronautics is more important now than it has ever been.”

Dr. Laurence A. Hawkins, consultant of General Electric’s research laboratory, says: “The newly invigorated spirit of research will be restricted by lack of man power, for it would be as foolish to attempt a research project with untrained men as to entrust a full-rigged ship to a crew of landlubbers.”

But for the war, most of the 150,000 men in the Lost Generation would now be seeking knowledge that would lead to new cures for disease, new products for industry, better living conditions, and new weapons to assure military security. Instead, the records show, they are either trickling out of the armed forces, two to five years behind in their studies, or still serving. Thousands of them, for economic reasons, have been or will be forced to abandon education in favor of immediate employment.

Even if every possible remedial step were taken immediately, it would be 1955 or 1960 before this country could catch up in scope of research activity with Britain and Russia. Russia, where the number of higher educational institutions was increased from 91 to 782 in 20 years, opened 60 new colleges during the war.

The basic knowledge from which came the remediesâ€”penicillin, sulfonamides, DDT, new vaccinesâ€”that cut the disease rates between World Wars I and II from 14.1 to .6 per 1,000 men was discovered before the last war, not during it.

The world attached scant importance to the epochal discovery in 1896 that certain elements emitted raysâ€”radioactivity is the word today. But thousands of lives were saved in World War II by that single piece of new knowledge. Certain battle injuries were found to require immediate transfusion with whole blood, but whole blood could be stored safely for only five days. The armed forces called for a preservative solution in which whole blood could be kept for 21 days. Using radioactive isotopes of iron and electric counters, which had been invented to count particles as they disintegrated from radioactive atoms, science delivered. The isotopes were used to “mark” blood that subsequently was transfused. Then the scientists counted the radiations emitted and were thus able to measure the survival of transfused red cells in different preservatives. Inferior preservatives were screened out and one that more than met military requirements was obtained.

Men who were preparing to continue such fundamental research were forced to abandon their studies for the durationâ€”which jeopardizes our future.

There are plenty of examples of science-drafting that emptied lab benches from which might have come momentous discoveries. In the National Advisory Committee for Aeronautics, where all fundamental federal aviation research is carried on, more than 500 men were drafted before an appeal to the White House brought about an arrangement to protect NACA’s professionals, most of whom were reservists. But when the war ended, the Army told NACA that it intended to call all reservists over 26 to active duty. This meant police work in foreign countries for two years for more than 600 men, 40 percent of the entire professional staff. The act itself has been staved off until March 31, but nobody knows what the next move is.

The Administration, Congress, Selective Service officials and the draft boards could have prevented loss of this generation of scientists by insisting on screening candidates for induction, and placing those with scientific backgrounds or promise at their proper battle stationâ€”the laboratory bench. All hedged, fearing public repercussion. The truth that some boys are more ideally suited to a test tube than to a trench was ignored. Finally, in November 1945, draft regulations designed to remedy the situation were issued, but they failed to prevent drafting of the science-minded student at the very time he is entering college.

Legislation that might have solved the problem was snarled for months, is still at this writing tied in a Gordian knot of Congressional proportions. Recommendations for establishment of a National Science Foundation, which would place 6,000 young people in science study each year until 24,000 ‘ are in college at all times, were embodied in a bill introduced by Senator Warren G. Magnuson on July 19. Senator Harley M. Kilgore, who sponsored a science mobilization bill as far back as 1942, four days later introduced a science foundation bill, varying somewhat from the Magnuson bill, but also providing for training of young scientists. More than 100 eminent witnesses urged passage of legislation. Then proponents of the bills started a dog fight, chiefly over whether the Foundation should be run by a governing board (Magnuson) or by a single administrator (Kilgore).

Scientific and industrial organizations did their best to mitigate the drain on our scientific reservoir, but they could plug only a few holes at a time. Industry implored draft boards to spare scientists; provided many scholarships for available students.

Ten organizations affiliated with the American Association for the Advancement of Science now have a plan to stem the tides if compulsory military training is initiated, a plan to test all youths for scientific aptitude and assign those with promise to technical training. This training would cost only about half what military training costs.

In the meantime, virtually all scientists agree, blanket deferment from the draft should be granted to all scientists and science students. If all the scientists under 26 who have been doing research work on war projects were deferred to continue scientific work or study, the Army would lose the services of only 6,000 men.

Next, all scientists and science students who have already been drafted should be released to resume their work.

Putting 24,000 young people into science schools, as has been proposed, would cost no more than one aircraft carrier loaded with atom bombs, and the nation’s need for scientists is urgent.

A large number of hybrid Ph.D.s who can bridge the gap between physics and other scientific fields must be created. These key men in future research teams can help regain some lost ground.

The atomic age demands vast multiplication of fundamental study. The money cost may be large, although science itself talks only in millions. Establishment of a National Science Foundation would assure federal financial support of fundamental research. Applied research must have federal help, too, but it will pay part of its own way as it solves its own problems.

A quarter of a million young people must be gotten into scientific study at once. This is a minimum “must”.

It is a “must” if we are to acquire what we must have to unlock further secrets of the atom: two or three scientists working where only one worked before the war.