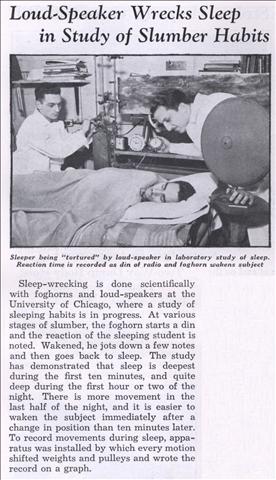 Sleep-wrecking is done scientifically with foghorns and loud-speakers at the University of Chicago, where a study of sleeping habits is in progress. At various stages of slumber, the foghorn starts a din and the reaction of the sleeping student is noted. Wakened, he jots down a few notes and then goes back to sleep. The study has demonstrated that sleep is deepest during the first ten minutes, and quite deep during the first hour or two of the night. There is more movement in the last half of the night, and it is easier to waken the subject immediately after a change in position than ten minutes later. To record movements during sleep, apparatus was installed by which every motion shifted weights and pulleys and wrote the record on a graph.