It’s hard to imagine a hospital without a P.A. system. 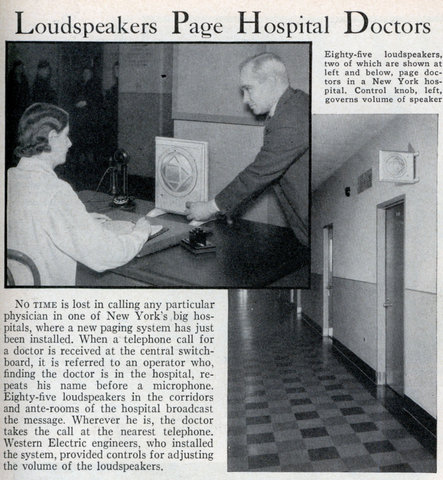 Loudspeakers Page Hospital Doctors
No time is lost in calling any particular physician in one of New York’s big hospitals, where a new paging system has just been installed. When a telephone call for a doctor is received at the central switchboard, it is referred to an operator who, finding the doctor is in the hospital, repeats his name before a microphone. Eighty-five loudspeakers in the corridors and ante-rooms of the hospital broadcast the message. Wherever he is, the doctor takes the call at the nearest telephone. Western Electric engineers, who installed the system, provided controls for adjusting the volume of the loudspeakers.