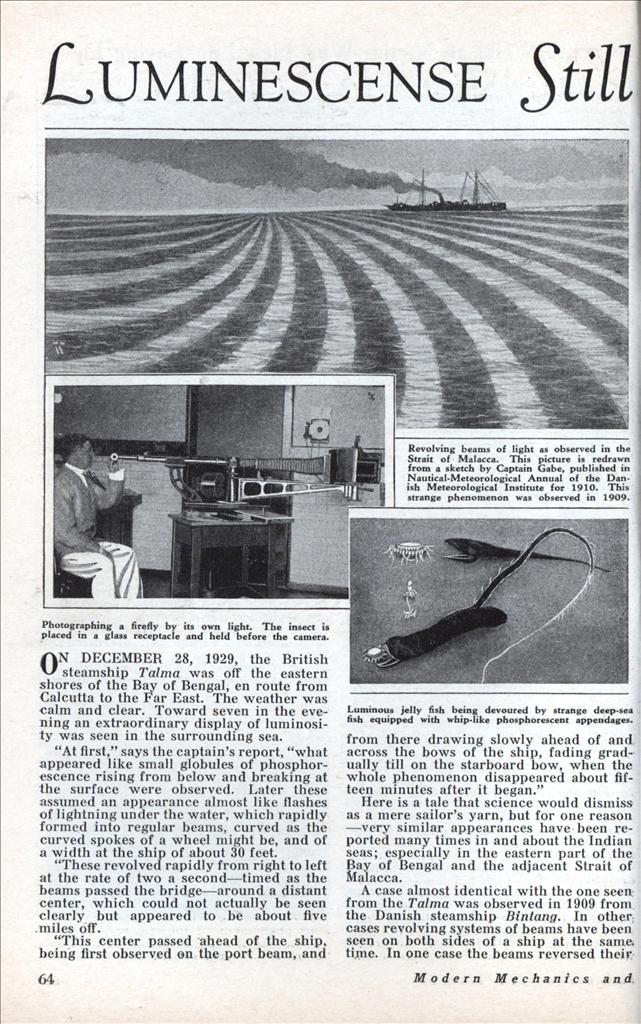 ON DECEMBER 28, 1929, the British steamship Talma was off the eastern shores of the Bay of Bengal, en route from Calcutta to the Far East. The weather was calm and clear. Toward seven in the evening an extraordinary display of luminosity was seen in the surrounding sea.

“At first,” says the captain’s report, “what appeared like small globules of phosphorescence rising from below and breaking at the surface were observed. Later these assumed an appearance almost like flashes of lightning under the water, which rapidly formed into regular beams, curved as the curved spokes of a wheel might be, and of a width at the ship of about 30 feet.

“These revolved rapidly from right to left at the rate of two a second—timed as the beams passed the bridge—around a distant center, which could not actually be seen clearly but appeared to be about five miles off.

“This center passed ahead of the ship, being first observed on the port beam, and from there drawing slowly ahead of and across the bows of the ship, fading gradually till on the starboard bow, when the whole phenomenon disappeared about fifteen minutes after it began.”

Here is a tale that science would dismiss as a mere sailor’s yarn, but for one reason —very similar appearances have been reported many times in and about the Indian seas; especially in the eastern part of the Bay of Bengal and the adjacent Strait of Malacca.

A case almost identical with the one seen from the Talma was observed in 1909 from the Danish steamship Bintang. In other cases revolving systems of beams have been seen on both sides of a ship at the same, time. In one case the beams reversed their direction of rotation during the observation.

The beams are generally described as curved, with their concave sides in the direction toward which they move. Most of the displays reported have lasted only a few minutes.

In its ordinary manifestations the so-called phosphorescence of the sea is, of course, a very familiar spectacle and its cause is well understood. It has nothing to do with phosphorus—hence science prefers to apply the term “luminescence” to this and other varieties of light that are accompanied by little or no perceptible heat—but is due to the presence in the water of light-bearing organisms that are to the ocean what glow-worms and fireflies are to the land. It seems, however, quite impossible that these creatures should travel in the water in such a way as to produce the effects just described.

A more plausible assumption is that these apparent evolutions are not due to actual movements of the luminescent organisms, but to the passage of wavelike impulses of some sort over the surface of the sea, in response to which these creatures light up momentarily, after the manner of flashing fireflies.

What these impulses might be is a profound mystery. Vibrations from submarine earthquakes or volcanic outbreaks have been suggested as a possible cause, but this suggestion leaves much to be explained.

There are several other mysterious luminous phenomena of the sea, and there is one on land that has been famous for ages, though it has received little attention from scientific men, especially in recent years. Here is a case reported in 1916 by Dr. Matthew Luckiesh.

The Mysterious Will-o’-the-Wisp Dr. Luckiesh was tramping one dark night over the desert between Goodsprings, Nevada, and Ivanpah, California. About 2 a.m. he came to an area where a shower and melting mountain snows had left shallow pools of water. Suddenly a light was seen floating in the air about five feet above the ground. As its distance and size were unknown it might have been taken for a light in a cabin window but for the fact that there was no human habitation within twenty miles.

Presently the light sailed off some distance and then stopped. Soon others appeared; some floating apparently stationary, others darting here and there. When the display was at its height hundreds of individual lights were visible simultaneously. The display was seen for more than an hour.

Most reference books tell you that it is supposed to be due to the spontaneous combustion of gases escaping from decaying matter in the soil, and certain gases in particular are mentioned in this connection; but when tried in the laboratory they fail to produce the effects described. No chemist has yet manufactured a good imitation of will-o’-the-wisp.

Luminous Bacteria Now it happens that many species of bacteria are luminescent; Dr. Molisch, the great German authority on luminescence, names twenty that shine by their own light, and he has utilized one species in constructing an ingenious “bacterial lamp,” which gives enough light to read by.

Prof. Fernando Sanford has suggested that bubbles of gas rising from wet ground are sometimes laden with swarms of luminous bacteria, and that this is the true explanation of will-o’-the-wisp. His suggestion seems to be the best guess thus far offered on the subject.