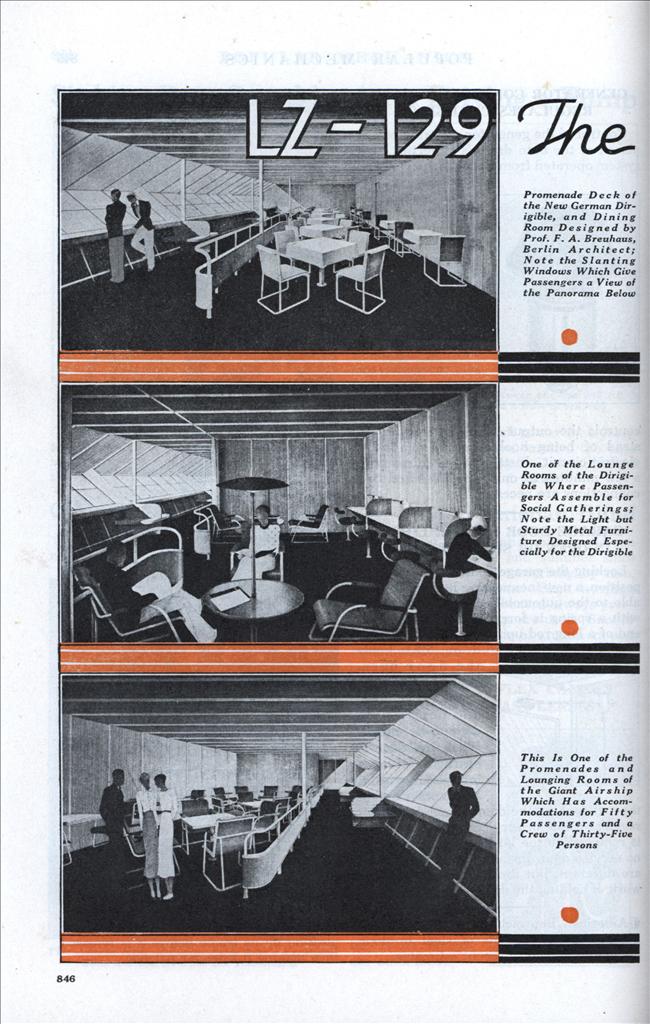 The “LZ-129,” under construction since February, 1932, is about to make her maiden trip across the Atlantic, with Dr. Eckener as her master.

Here are the main facts about the ship: Length, 812 feet; greatest diameter, 137 feet; gross lifting capacity, 418,000 pounds; pay load twenty-five to thirty tons; fuel load, 130,000 pounds; cruising speed eighty miles per hour, which will carry it across the Atlantic in about two days.

Passenger accommodations are superior to those on any previous aircraft. The de-signer, Prof. F. A. Breuhaus, created an “architecture of the air” in the interior decoration. He designed chairs, tables and beds as an engineer would design a bridge.

Because so much dead weight was saved in the design, it is possible to accommodate fifty passengers and a crew of thirty-five in the ship’s twenty-five staterooms, each with hot and cold running water. In addition, the ship will carry considerable express and mail.

There are two groups of parlors, including two promenade decks, giving a total floor space of 5,380 square feet, of which one-half is available for social gatherings.

The passengers will be permitted to smoke, a luxury denied on the “Graf Zeppelin.” The social salons and promenades are in the sides of the ship to enable passengers to have a full view of the panorama. Living quarters are in the interior of the ship. All cabins are windowless, air-conditioned, and lighted for comfort.

There is even enough room for certain deck games. Passengers will eat in comfort in a dining room with thirty-eight chairs and equipped with long tilted windows. The living quarters are in two decks, one above the other, connected by a broad staircase. The galley, with its electric stove and other equipment, is on the lower deck. Here also are the bathrooms, steward’s office and crew’s quarters.

In order to offset the coldness of metal furniture, the public rooms are decorated in soft pleasing colors. Wall paintings show the history and development of the airship, a bird’s-eye panorama of the route traveled, and the constellations in both northern and southern hemispheres.

The engines will develop 4,400 horsepower in all. For the first time an airship will have the advantage of Diesel engines. They are hung on the outside, as on the “Graf,” and each operates independent of the rest. The “LZ-129’s” immense cruising range, 8,000 miles, enables her to travel around the world with only two refueling stops. The ship is equipped with an apparatus for extracting water vapor from the surrounding atmosphere at a rate of about 150 gallons per hour.

Clark Howell, chairman of the federal aviation commission, recently pointed to the value of dirigibles in commerce.

“Dr. Eckener,” he said, “has made thirty-seven voyages across the ocean and circumnavigated the earth without missing a schedule in the ‘Graf,’ covering more than 625,000 miles without a serious accident.

“If the Germans can do it, we can. The record of the ‘Graf Zeppelin’ should be an object lesson and we should leave nothing undone to see to it that, whatever may be the shortcomings, either in construction or operation, of lighter-than-air craft, they can and will be surmounted.”

Commander Charles E. Rosendahl, a veteran of many airship flights, said: “The loss of 282 airships since 1919 was due almost entirely to naval and military operations. No attempt to cross the ocean by airship has ever come to grief.”