Modern Mechanix
Issue: May, 1931
Posted in: Kitchen
10 Comments on Machine Cooks Flapjacks, Turns, Delivers Them to Plate Automatically (May, 1931)

Machine Cooks Flapjacks, Turns, Delivers Them to Plate Automatically (May, 1931) 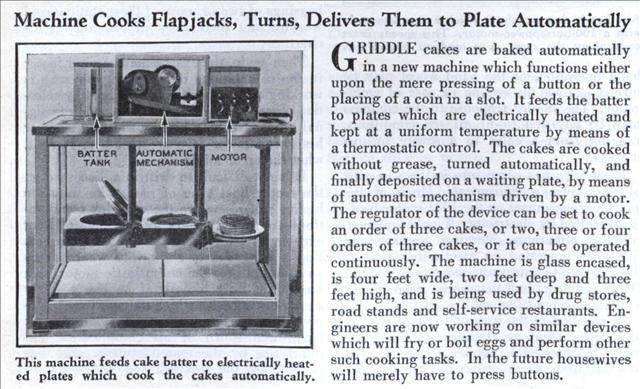 GRIDDLE cakes are baked automatically in a new machine which functions either upon the mere pressing of a button or the placing of a coin in a slot. It feeds the batter to plates which are electrically heated and kept at a uniform temperature by means of a thermostatic control. The cakes are cooked without grease, turned automatically, and finally deposited on a waiting plate, by means of automatic mechanism driven by a motor. The regulator of the device can be set to cook an order of three cakes, or two, three or four orders of three cakes, or it can be operated continuously. The machine is glass encased, is four feet wide, two feet deep and three feet high, and is being used by drug stores, road stands and self-service restaurants. Engineers are now working on similar devices which will fry or boil eggs and perform other such cooking tasks. In the future housewives will merely have to press buttons.