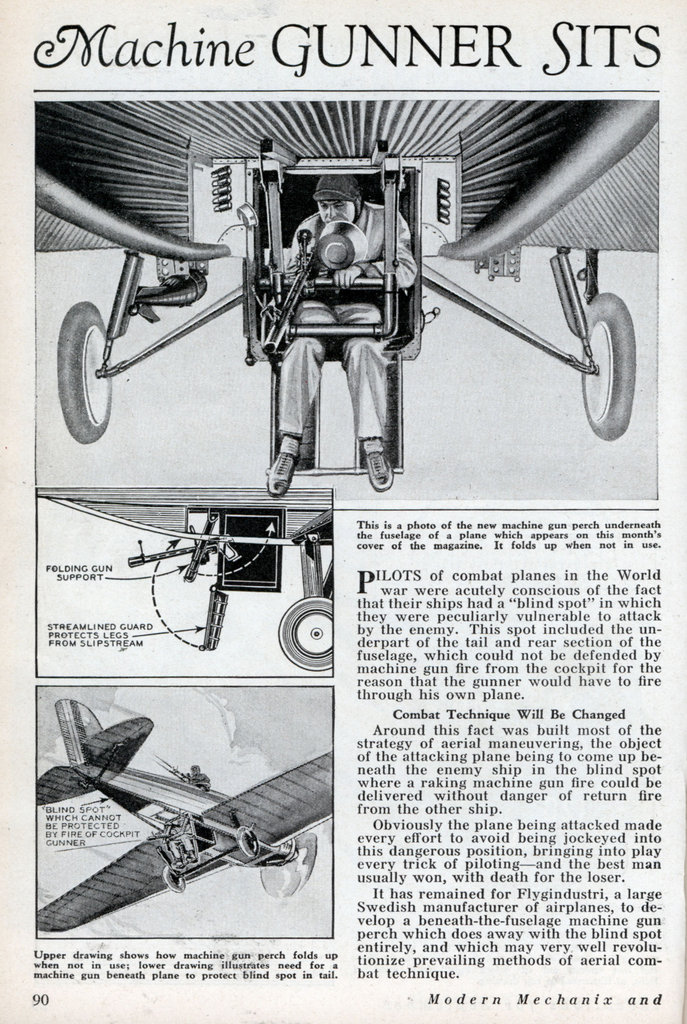 PILOTS of combat planes in the World war were acutely conscious of the fact that their ships had a “blind spot” in which they were peculiarly vulnerable to attack by the enemy. This spot included the underpart of the tail and rear section of the fuselage, which could not be defended by machine gun fire from the cockpit for the reason that the gunner would have to fire through his own plane.

Combat Technique Will Be Changed

Around this fact was built most of the strategy of aerial maneuvering, the object of the attacking plane being to come up beneath the enemy ship in the blind spot where a raking machine gun fire could be delivered without danger of return lire from the other ship.

Obviously the plane being attacked made every effort to avoid being jockeyed into this dangerous position, bringing into play every trick of pilotingâ€”and the best man usually won, with death for the loser.

It has remained for Flygindustri, a large Swedish manufacturer of airplanes, to develop a beneath-the-fuselage machine gun perch which does away with the blind spot entirely, and which may very well revolutionize prevailing methods of aerial combat technique.

The photograph at the top of this page shows the perch with a gunner in position to attack an oncoming plane. The gunner faces the tail of his own ship, sitting in a trapeze-like box with a machine gun swinging on a special support in front of him. He can move the gun up or down and to right or left so that the old blind spot area is effectively covered.

Streamlined leg guards protect the gunner from the air stream, the guards also serving as foot rests. In an emergency the gunner can make a parachute jump to safety by swinging the machine gun up and out of the way.

As yet the device has not progressed beyond the experimental stage, but it has been adequately tested by its designers and found to serve its purpose marvelously well. There is a slight lessening of speed because of the frontal resistance of the perch, but the advantage of being protected against attack from all angles far outweighs this objection.

Can Leave Perch Via Parachute

A trap-door can be provided through which the gunner can descend to his perch from an upper cockpit, although in the experimental models the gunner has sat in his perch from the moment of take-off until landing, except as he may decide to descend via parachute instead of with the plane.

Heavy bumpers running along both sides of the fuselage protect the perch from damage in case the plane makes a rough landing. Leg guards fold up and the gunner sits tight until the ship rolls to a stop. It’s not very comfortable, but that’s of no importance to military necessity.

Single-place pursuit ships can likewise be provided with a machine gun defense for their blind spots by an entirely different adaptation of the rear-firing gun idea, illustrated below.

In this instance, two guns would be mounted on the lower sides of the fuselage, one on each side immediately below the pilot’s cockpit, where they would be handy for clearing jams. Placed here, they would be able to direct a converging line of fire on an attacking ship.

To obtain effective aim it would be necessary to have a periscopic gun sight installed, along the lines of the mirror-sight shown in the drawing. The periscopes would be hinged to get focus and this would be controlled by the pilot with a small hand wheel situated near the view-finder.

With this equipment, it would be entirely possible for a brilliant pilot to shoot down enemy ships at both front and rear at practically the same moment.