Popular Science
Issue: Apr, 1930
Posted in: General
No Comments on Machine Measures Thought but Is No Mind Reader (Apr, 1930)

Machine Measures Thought but Is No Mind Reader (Apr, 1930) 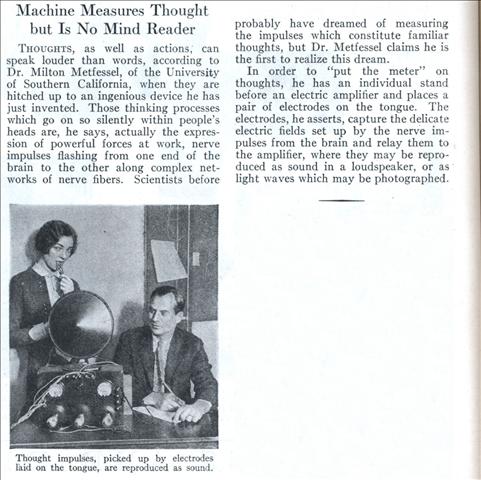 Machine Measures Thought but Is No Mind Reader

Thoughts, as well as actions, can speak louder than words, according to Dr. Milton Metfessel, of the University of Southern California, when they are hitched up to an ingenious device he has just invented. Those thinking processes which go on so silently within people’s heads are, he says, actually the expression of powerful forces at work, nerve impulses flashing from one end of the brain to the other along complex networks of nerve fibers. Scientists before probably have dreamed of measuring the impulses which constitute familiar thoughts, but Dr. Metfessel claims he is the first to realize this dream.

In order to “put the meter” on thoughts, he has an individual stand before an electric amplifier and places a pair of electrodes on the tongue. The electrodes, he asserts, capture the delicate electric fields set up by the nerve impulses from the brain and relay them to the amplifier, where they may be reproduced as sound in a loudspeaker, or as light waves which may be photographed.