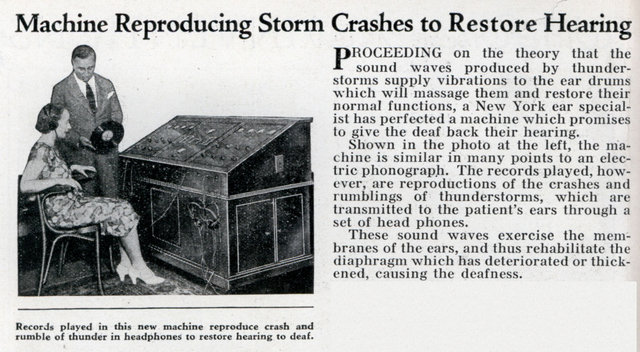 PROCEEDING on the theory that the sound waves produced by thunderstorms supply vibrations to the ear drums which will massage them and restore their normal functions, a New York ear specialist has perfected a machine which promises to give the deaf back their hearing.

Shown in the photo at the left, the machine is similar in many points to an electric phonograph. The records played, however, are reproductions of the crashes and rumblings of thunderstorms, which are transmitted to the patient’s ears through a set of head phones.

These sound waves exercise the membranes of the ears, and thus rehabilitate the diaphragm which has deteriorated or thickened, causing the deafness.