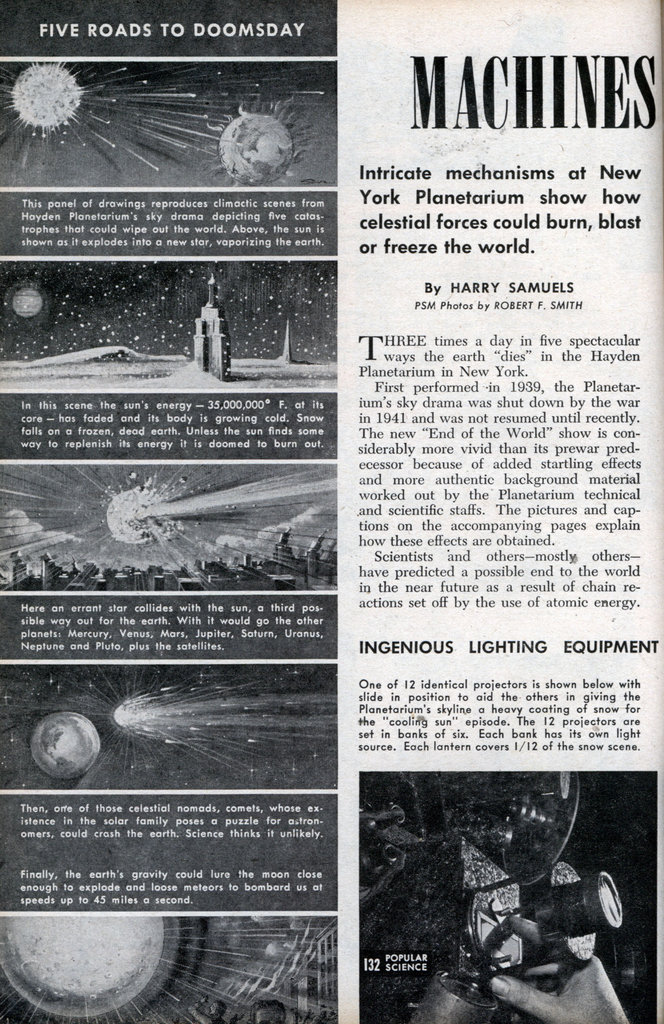 Scientists and othersâ€”mostly others-have predicted a possible end to the world in the near future as a result of chain reactions set off by the use of atomic energy.

The varieties of cosmic destruction depicted in the Planetarium show are, however, many millions of years distant by estimates of most astronomers.

The Planetarium audience, seated under a huge dome, is transported through time and space to the center of Central Park in New York on a day billions of years in the future.

The earth comes to its end the first time as the result of the misbehavior of the sun. The sun bursts into a nova, or new star, something that more than 10 other self-illuminated, gigantic heavenly bodies do each year (PSM, July ’46, p. 108). The sudden, cataclysmic flood of heat and energy generated by the blast shrivels the earth to death.

Next, the Planetarium onlookers watch the other, but equally final, extremeâ€”the eventual cooling of the sun to a degree where our globe becomes bleak and frozen and can no longer sustain life.

Gordon A. Atwater, Planetarium chairman, says this cooling of the sun is an almost certain eventuality unless it has some unknown and inexhaustible means of renew-ing its energy.

In the third preview of doom, the earth and all the other planets of our solar system are innocent victims of a celestial hit-and-run accident. The sun explodes as the result of a collision with a star from far out in space.

The fourth possible end of the world occurs when a mysterious wanderer from space, a comet with a flaming tail, appears on the celestial stage. It approaches the earth at bewildering speed. Closer and closer it comes until it strikes with a terrible impact. Where the earth was a fraction of a second before there is now only space. Though not probable, a collision between the earth and a comet is possible.

Astronomers know that some remote day the earth will pull the moon within the so-called “Roche’s limit,” a distance from the earth roughly twice the earth’s diameter. What will happen then is shown in the awesome finale at the Planetarium.

Moving slowly at first, but gaining momentum as it approaches the New York skyline, a huge and terrifying moon soon fills half of the sky. There is a shattering crash as the moon explodes in the southeast horizon, breaking up into thousands of flaming meteors that bombard the mother planet. The skyline that rims the Planetarium becomes a circle of blazing buildings. As the flames die down, pieces of the shattered moon circle the earth similar to the moons of Saturnâ€”a halo for a dead world!