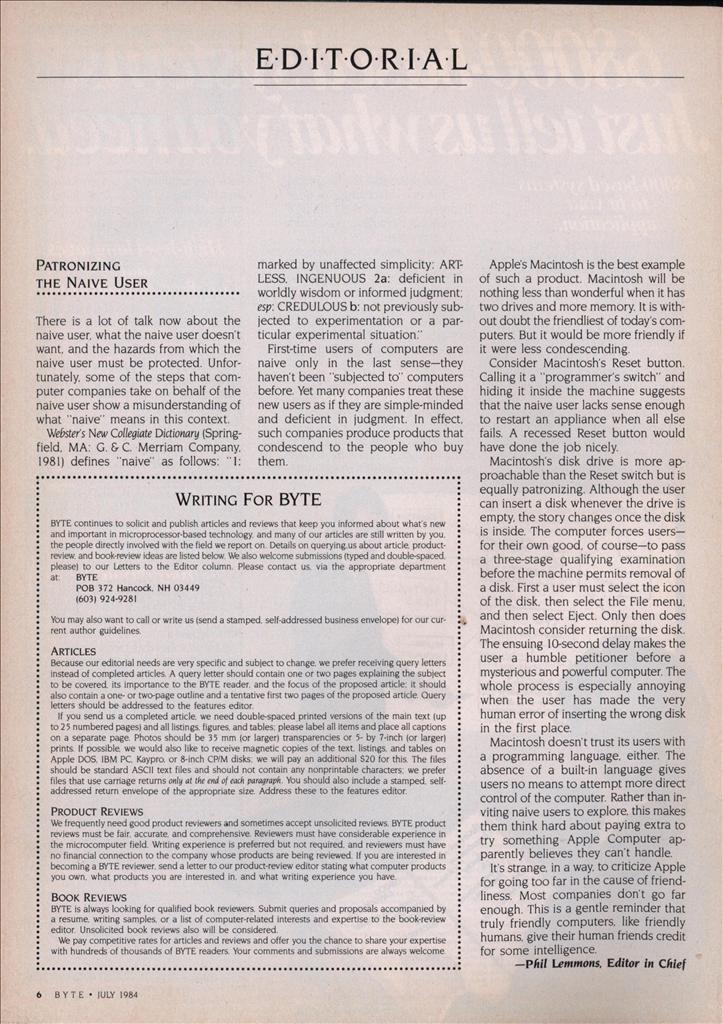 marked by unaffected simplicity: ARTLESS, INGENUOUS 2a: deficient in worldly wisdom or informed judgment: esp: CREDULOUS b: not previously subjected to experimentation or a particular experimental situation.”

First-time users of computers are naive only in the last sense—they haven’t been “subjected to” computers before. Yet many companies treat these new users as if they are simple-minded and deficient in judgment. In effect, such companies produce products that condescend to the people who buy them.

Apple’s Macintosh is the best example of such a product. Macintosh will be nothing less than wonderful when it has two drives and more memory. It is without doubt the friendliest of today’s computers. But it would be more friendly if it were less condescending.

Consider Macintosh’s Reset button. Calling it a “programmer’s switch” and hiding it inside the machine suggests that the naive user lacks sense enough to restart an appliance when all else fails. A recessed Reset button would have done the job nicely.

Macintosh’s disk drive is more approachable than the Reset switch but is equally patronizing. Although the user can insert a disk whenever the drive is empty, the story changes once the disk is inside. The computer forces users— for their own good, of course—to pass a three-stage qualifying examination before the machine permits removal of a disk. First a user must select the icon of the disk, then select the File menu, and then select Eject. Only then does Macintosh consider returning the disk. The ensuing 10-second delay makes the user a humble petitioner before a mysterious and powerful computer. The whole process is especially annoying when the user has made the very human error of inserting the wrong disk in the first place.

Macintosh doesn’t trust its users with a programming language, either. The absence of a built-in language gives users no means to attempt more direct control of the computer. Rather than inviting naive users to explore, this makes them think hard about paying extra to try something Apple Computer apparently believes they can’t handle.

It’s strange, in a way, to criticize Apple for going too far in the cause of friendliness. Most companies don’t go far enough. This is a gentle reminder that truly friendly computers, like friendly humans, give their human friends credit for some intelligence.