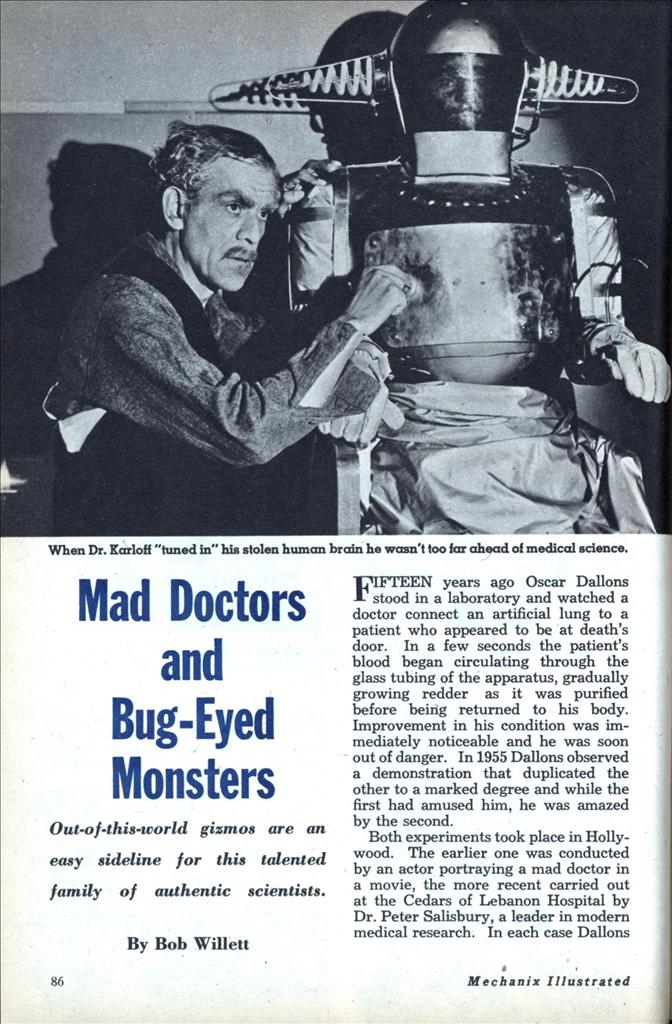 Both experiments took place in Hollywood. The earlier one was conducted by an actor portraying a mad doctor in a movie, the more recent carried out at the Cedars of Lebanon Hospital by Dr. Peter Salisbury, a leader in modern medical research. In each case Dallons had good reason to be proud of the part he had played.

Seeing movie fiction become medical fact is nothing new to Oscar Dallons. In partnership with his brothers, Paul and Franz, he heads a highly specialized – medical electronics manufacturing concern and, at the same time, supplies most of the film industry’s futuristic life-saving and death-dealing props. For 25 years Dallons Laboratories, Inc., has been outstanding among the comparatively few firms working on electromedical and electro-surgical machines. The Dallons brothers have contributed to the perfection of the cardioscope heart-monitor and the artificial lung. They are currently experimenting with an electro-encephaloscope, which will monitor brainwaves.

“Oddly enough, the farfetched gadgets used in science-fiction and horror films have pushed acceptance of new equipment by medical men,” Oscar Dallons points out. “And some of the goofy gizmos we’ve created to fit a screenplay, which seemed laughable at the time, have actually inspired us to greater efforts in genuine research.

“The idea of monitoring brainwaves, for example, was used in The Devil Commands, a movie made in 1941. Boris Karloff was the mad doctor who attempted to get clues to the location of a treasure by taking the brains from the bodies of a group of people who had died in a plane crash while en route to the spot, and installing them in robots.

He planned to recapture their thoughts at the time of death. As his final experiment, he was going to add his daughter—who was very much alive and, of course, very beautiful—to this scientific seance. However, as usual, a nosy newspaperman stepped in and saved her just before the robots blew up. The plots of these pictures are almost impossible, but we’ve stopped laughing at them the way we used to; in several cases it has taken only ten years for the script writers to have the last laugh.”

Oscar, Paul and Franz have had their bad moments, as serious scientists, with producers who want a startling mingling of fact and fancy. Genuine cyclatrons and A-bombs have to be jazzed up with fake effects for the fans while still retaining some realism. They are much happier when the script calls for a thermic disintegrator, cosmic vaporizer, death-ray gun or some other pseudo-scientific gizmo that can’t be compared to the real thing. The prime requisites of the goofier gadgets are lights that go on and off, switches that snap like pistol shots and plenty of power hum.

Dallons disintegrators are mostly flickering neon coils, their vaporizers have white-hot barrels that are really internally-lighted cylinders of frosted glass and their death-ray guns are whipped up from odd items lying around the shop. Occasionally, however, they call for real ingenuity. The Gyro Death-Ray gun, for instance, was something special that had to put across the gyroscopic principle in addition to the usual features. It took some midnight oil, but the Dallons brothers finally filled the bill with a contraption using a war surplus B-29 landing light, equipped with a slow-turning propeller that threw shafts of light reflected from a cathode tube.

The switchboard of Captain Video’s space ship is of Dallons manufacture and is typical of their sideline. Among their masterpieces is the gadget that buzzed, flashed and crackled when turned on by the nutty professor who was the central figure of the recent science-fiction film Donovan’s Brain. The Space Patrol program, which led the field in the first few years of television, relied on Dallons props to make its interplanetary shenanigans convincing, and the brothers are credited with much of the success of the Captain Video movie serial of five years ago, as well as the current popularity of this program on TV. If the present trend continues, Oscar Dallons may have to set up a separate department to handle film and TV studio requests on a full-time basis.

“The studio stuff used to be fun,” Dallons declares, “But nowadays it doesn’t take long for these things to get out of date. Keeping pace with science-fiction as well as the rapid progress in our regular field can be a headache. We used to have a semi-permanent collection of props but in recent years we have been kept busy carting old ones to the junkyard.

“A simple gadget like a space helmet used to call for little more than a couple of antennas but television has taught young space cadets that communication can be accomplished via a miniature transistor-equipped ‘mind monitor’ that makes a space helmet look almost as old as Davy Crockett’s coonskin cap. And we can no longer get away with just action and sound. We have to at least hint at a real scientific basis for the way the futuristic machines work. In a way, we’re educators. All kids want to invent things, and pseudo-scientific stories acquaint them with scientific terms and encourage thinking along scientific lines.”

The Dallons brothers shy away from screen credit, probably because their hobby could be embarrassing in relation to their regular work. Still, 51-year-old Oscar is a gadgeteer at heart. Whenever he takes a visiting scientist on a tour of the laboratories he can’t resist a trip to the picture prop “boneyard” at the back of the building. Pointing out a prize gizmo, he’ll ask the visitor if he knows what it is called. Receiving a negative reply, he’ll chuckle and say, “Don’t worry—I don’t know what it is, either.” His absent-mindedness is confined entirely to this sideline. From a purely scientific point of view he possesses one of the most brilliant minds in the business and has solved more than one tricky technical problem that had other scientists puzzled.

The Hughes germanium diode conductor, an important component of modern aircraft, appeared to be impractical because of a sealing problem until it was dropped in the Dallons’ laps. The solution was hand-drawn glass tubing finer than a hair, which Paul was able to make because of previous experience making minute glass capillaries for artificial body organs used in both movies and medicine.

The Dallons brothers make a team well equipped to handle complex scientific problems. Oscar is a physicist, Franz an electronic engineer and Paul a glass and vacuum technologist. They began their careers working with their father, a Belgian-born glass expert who was famous for turning out new types of glass medical equipment in his Los Angeles plant. As the business grew it took on the development of medical equipment generally.

In 1942 the Dallons went into the crystal business to help out the Signal Corps. Since then over a million of their crystals have been sold to the government. Only one other firm produces crystals that meet rigid government specifications. Dallons crystals have made possible many of the postwar advances in the field of ultrasonics and a Dallons-developed gimmick incorporating their crystals is the essential “brain” of modern target-chasing missiles.

Dallons Laboratories were largely responsible for the reputation Boris Karloff established as a monster-maker, which started a trend in horror pictures lasting 20 years. They do more than build wacky props. Since a 2,000,000-volt spark-gap machine with a ten-foot jump is a standard item on their “looney laboratory” list, Oscar has also had to act as a technical advisor, teaching actors how to use electrical gadgets without a jolt that, while harmless, could be hair-raising.

“I sometimes run into directors who would prefer to have the players blunder along in the hope of getting more realistic reactions,” Dallons told me. “The movie and television people deserve praise for attempting to make medical scenes as authentic as possible but they have a tendency to overdo things. For one Climax TV show we supplied an electro-cardioscope. The director thought there’d be more realism if we hooked it, up to an actual heart, beating offstage. This worked well during the first rehearsal but, when I learned that the patient was to die as a result of fibrilation, I convinced them that realism could be carried too far. Much to the relief of the man whose heart-action we were monitoring, the director finally agreed to fake it!”

This particular melodrama was typical of a movie-TV trend away from mad scientist villains to real-life killers like fibrilism—a condition in which the heart muscle tissues lose coordination. But cheer up, you old-fashioned sci-fantasy fans; as long as you want monocular monsters and dreadful doohickeys, Hollywood and the Dallons brothers will go on dreaming them up for you.