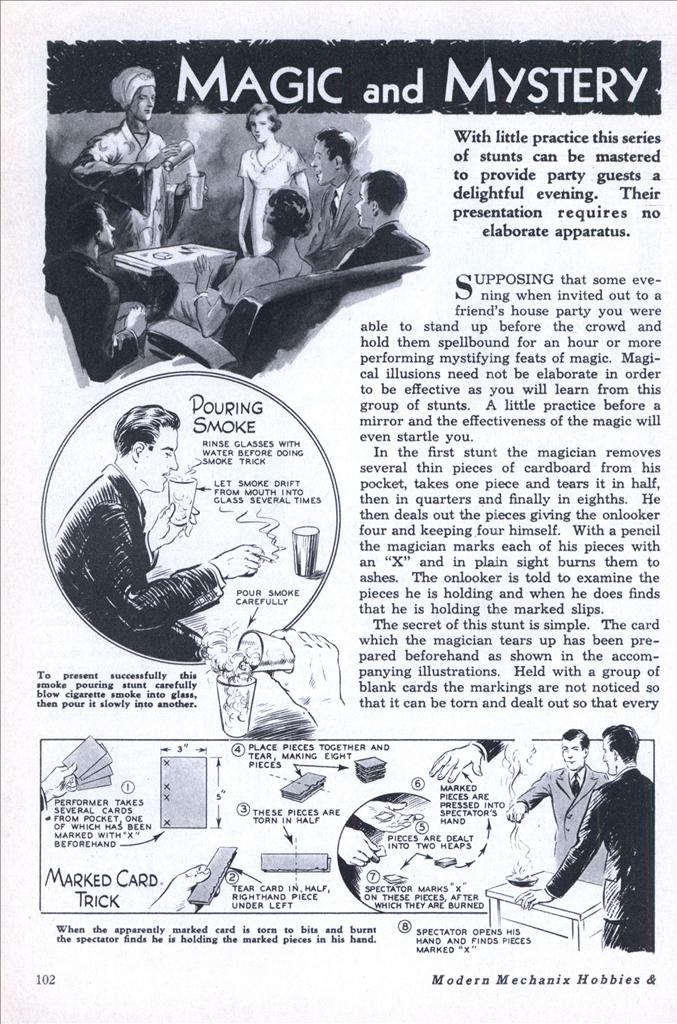 Magic and Mystery for Party Fun

With little practice this series of stunts can be mastered to provide party guests a delightful evening. Their presentation requires no elaborate apparatus.

SUPPOSING that some evening when invited out to a friend’s house party you were able to stand up before the crowd and hold them spellbound for an hour or more performing mystifying feats of magic. Magical illusions need not be elaborate in order to be effective as you will learn from this group of stunts. A little practice before a mirror and the effectiveness of the magic will even startle you.

In the first stunt the magician removes several thin pieces of cardboard from his pocket, takes one piece and tears it in half, then in quarters and finally in eighths. He then deals out the pieces giving the onlooker four and keeping four himself. With a pencil the magician marks each of his pieces with an “X” and in plain sight burns them to ashes. The onlooker is told to examine the pieces he is holding and when he does finds that he is holding the marked slips.

The secret of this stunt is simple. The card which the magician tears up has been prepared beforehand as shown in the accompanying illustrations. Held with a group of blank cards the markings are not noticed so that it can be torn and dealt out so that every other one of the pieces will be a blank. The pieces held by the spectator are marked all the while, although he never realizes it.

Most people think of smoke as something that floats away, but you show them that smoke can be poured from one glass to another just like water. To do this first moisten the inside of two drinking glasses then with a mouthful of smoke place your lips over the edge of the glass and blow gently so that the smoke settles in the bottom. Now by carefully bringing the other glass alongside the first tilt the smoke-filled glass allowing the smoke to pass into the other glass. A little practice and this stunt will be highly effective.

Completing the smoke trick pick up several colored wax crayons and pass them out to your audience. With your back turned have them wrap the crayons in paper so that their color cannot be detected, then announce that you will identify them even though they are wrapped and you hold them behind your back. Still wrapped you return them one at a time to the spectators telling correctly each color.

The secret to this bit of magic is simple. While holding the wrapped crayon behind your back force it out of the wrapper, so that it can be rubbed on your fingernail, then rewrap the crayon and hand it back announcing the color as you do so by noting the bit of wax on your fingernail.

Probably the most effective stunt in the group is the Psychic Light Demonstration. Have several members of the audience tie you up in a chair so that it is impossible for you to move your hands. This having been done state that you will, by psychic means, cause a light to float in front of you. Have someone turn off the lights and to the amazement of onlookers a light suddenly comes into view and floats before them, then vanishes. When the lights are again turned on you are still tied and searching your pockets reveals no flashlights or other apparatus.

The secret is a luminous thumb tack which has been placed beforehand on the sole of the shoe. Although tied up in the chair it is a simple matter to swing your leg so that the tack seems to be, in the eyes of the audience, a floating light.

Although not a trick the next item will be of special interest to women. Passed around they will exclaim in amazement at the number of times the tiny eye of the needle has been threaded. What appears to be a hundred or more individual threads pass through the eye of the needle in a manner which seems humanly impossible.

Like all magic, there’s a trick in doing it. Thread the needle in the usual manner then pierce the free end of the thread with the needle, drawing it up over the eye. Form the thread into a loop and pull it through the eye, in the manner shown until the needle eye is full, then cut the loop as indicated and the trick is completed.