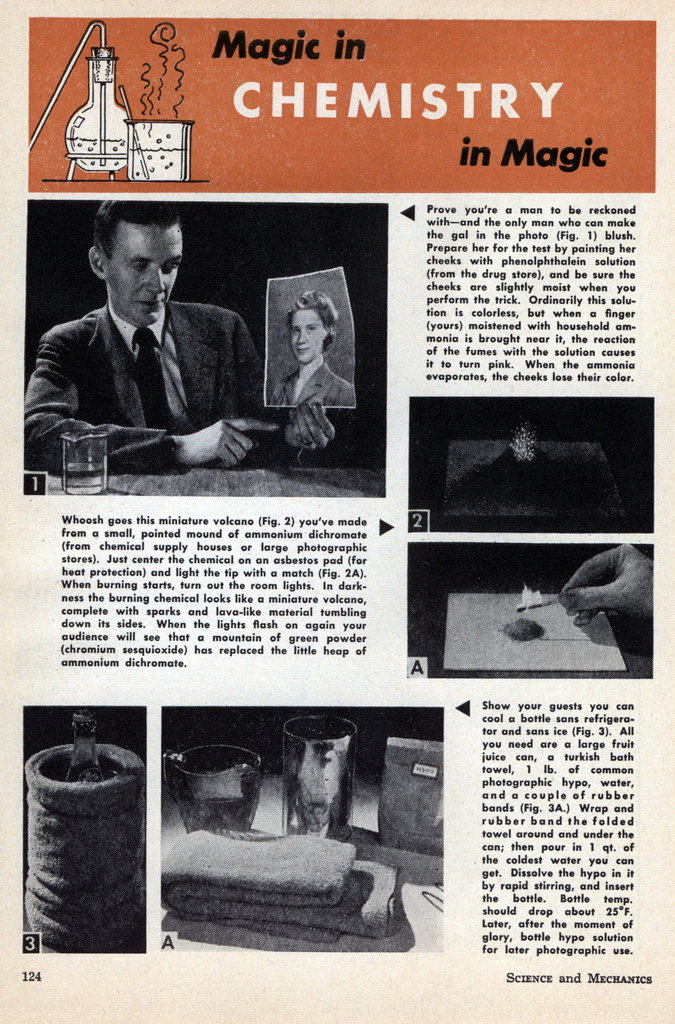 Magic in Chemistry, Chemistry in Magic

Prove you’re a man to be reckoned withâ€”and the only man who can make the gal in the photo (Fig. 1) blush. Prepare her for the test by painting her cheeks with phenolphthalein solution (from the drug store), and be sure the cheeks are slightly moist when you perform the trick. Ordinarily this solution is colorless, but when a finger (yours) moistened with household ammonia is brought near it, the reaction of the fumes with the solution causes it to turn pink. When the ammonia evaporates, the cheeks lose their color.

Whoosh goes this miniature volcano (Fig. 2) you’ve made from a small, pointed mound of ammonium dichromate (from chemical supply houses or large photographic stores). Just center the chemical on an asbestos pad (for heat protection) and light the tip with a match (Fig. 2A). When burning starts, turn out the room lights. In darkness the burning chemical looks like a miniature volcano, complete with sparks and lava-like material tumbling down its sides. When the lights flash on again your audience will see that a mountain of green powder (chromium sesquioxide) has replaced the little heap of ammonium dichromate.

Show your guests you can cool a bottle sans refrigerator and sans ice (Fig. 3). All you need are a large fruit juice can, a turkish bath towel, 1 lb. of common photographic hypo, water, and a couple of rubber bands (Fig. 3A.) Wrap and rubber band the folded towel around and under the can; then pour in 1 qt. of the coldest water you can get. Dissolve the hypo in it by rapid stirring, and insert the bottle. Bottle temp, should drop about 25Â°F. Later, after the moment of glory, bottle hypo solution for later photographic use.

Make your friend’s name turn into a caricature of himself (Fig. 4). Fortify yourself ahead of time by drawing the caricature in invisible ink made by mixing a pinch each of potassium iodide and cornstarch in a tablespoon of water, then heating for several minutes to dissolve the starch. Next, write the name with any ink that can be removed with ordinary ink remover, but dilute 1 part ink into 15 parts of water (Fig. 4A).

It’s a whiff of chlorine gas in the jar that does the trick. It bleaches the ordinary ink and releases the brown-colored free iodine in the invisible ink. To make the chlorine, cover the bottom of the jar with sodium hypochlorite bleach, such as Chlorox or Linco, and then add a little hydrochloric acid. Lay a square of stiff cardboard over the jar to confine the gas while it is being generated, and don’t inhale the gas.

Want to make an ink with which you can write a message that is invisible in humid weather but which turns blue when the weather is fair â€”and the fairer the bluer (Fig. 5)? Just dissolve a few crystals of cobalt chloride in a little water. Write the message with a blunt instrument, and apply plenty of solution (Fig. 5A). Invisible when even slightly moist, the writing appears whenever the weather is dry enough, or the paper is dried artificially under an electric light.

Show the folks how pure oxygen facilitates combustion (Fig. 6). Pour about an inch of hydrogen peroxide into a test tube, and add a few grains of powdered manganese dioxide which acts as a catalyst to liberate the oxygen. After a few seconds, insert into the upper part of the tube a wood splinter or a piece of cord with a spark at its tip. Instantly, the spark will burst into flame. A small piece of steel wool, heated red hot, will burn brightly if lowered into the tube.

You can bring a dozing audience (someone else’s, naturally, not yours) to quick attention by changing wood alcohol to that evil-smelling gas, formaldehyde (Fig. 7). Customarily used in water solution to preserve biological specimens and to harden photographic film, the gas is made commercially by oxidizing methyl, or wood alcohol by means of heat and a surface catalyst. You can do this, however, by immersing a test tube containing a teaspoonful of the alcohol in hot water. When alcohol warms, heat a 1/4-in. coil of bare copper wire in a gas flame and plunge it into the alcohol vapor. The copper causes the vapor to unite with oxygen from the air and from the film of oxide on itself, and the smell of wood alcohol changes into the pungent odor of formaldehyde.