Popular Science
Issue: Aug, 1931
Posted in: How to
Tags: how its made, lighting, signs
1 Comment on MAGIC OF NEON SIGN MAKING SHOWN IN PICTURES (Aug, 1931) 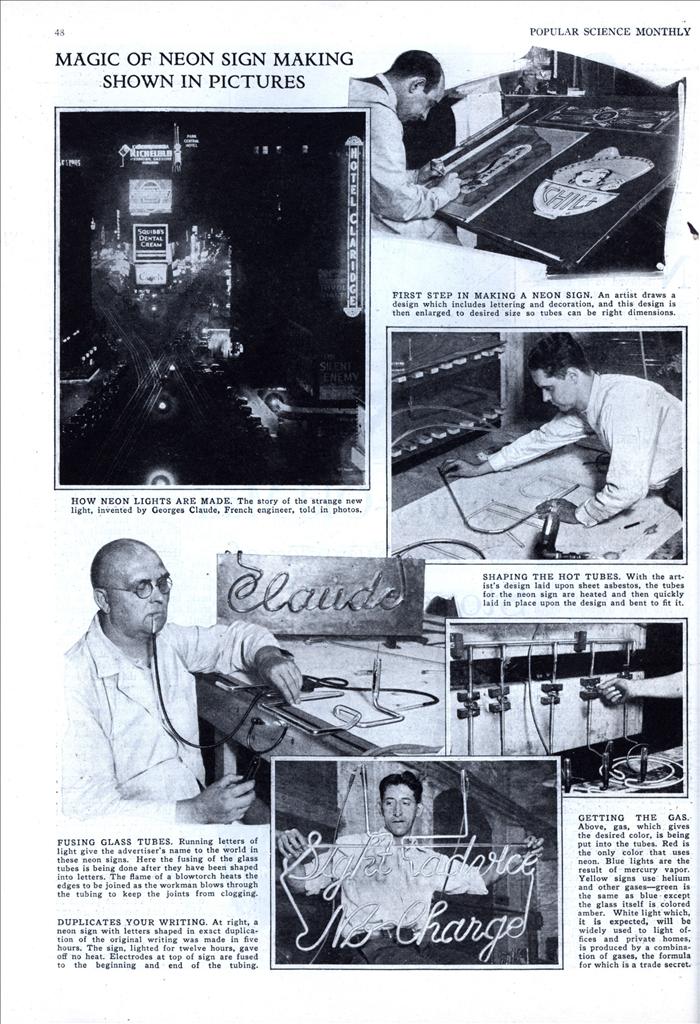 HOW NEON LIGHTS ARE MADE. The story of the strange new light, invented by Georges Claude, French engineer, told in photos.

FIRST STEP IN MAKING A NEON SIGN. An artist draws a design which includes lettering and decoration, and this design is then enlarged to desired size so tubes can be right dimensions.

SHAPING THE HOT TUBES. With the artist’s design laid upon sheet asbestos, the tubes for the neon sign are heated and then quickly laid in place upon the design and bent to fit it.

FUSING GLASS TUBES. Running letters of light give the advertiser’s name to the world in these neon signs. Here the fusing of the glass tubes is being done after they have been shaped into letters. The flame of a blowtorch heats the edges to be joined as the workman blows through the tubing to keep the joints from clogging.

GETTING THE GAS. Above, gas, which gives the desired color, is being put into the tubes. Red is the only color that uses neon. Blue lights are the result of mercury vapor. Yellow signs use helium and other gases—green is the same as blue except the glass itself is colored amber. White light which, it is expected, will be widely used to light offices and private homes, is produced by a combination of gases, the formula for which is a trade secret.

DUPLICATES YOUR WRITING. At right, a neon sign with letters shaped in exact duplication of the original writing was made in five hours. The sign, lighted for twelve hours, gave off no heat. Electrodes at top of sign are fused to the beginning and end of the tubing.