I think we can trace the fall of the English language to this article. Yes kids, it all started with the word “collectingest “. 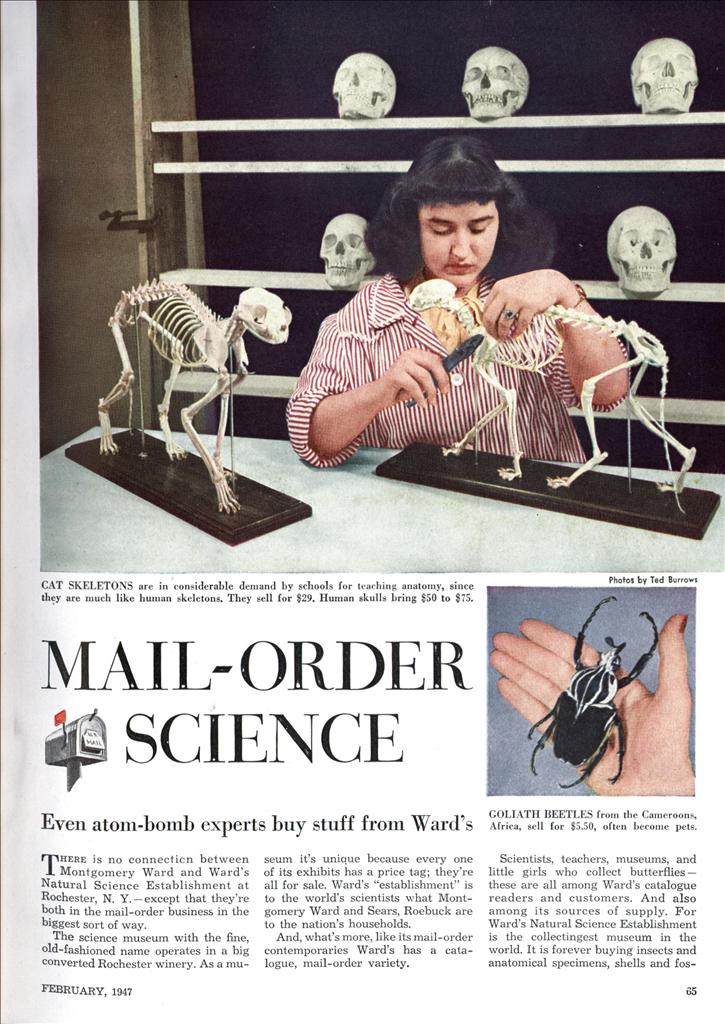 There is no connection between Montgomery Ward and Ward’s Natural Science Establishment at Rochester, N.Y. —except that they’re both in the mail-order business in the biggest sort of way.

The science museum with the fine, old-fashioned name operates in a big converted Rochester winery. As a mu- seum it’s unique because every one of its exhibits has a price tag; they’re all for sale. Ward’s “establishment” is to the world’s scientists what Montgomery Ward and Sears, Roebuck are to the nation’s households.

And, what’s more, like its mail-order contemporaries Ward’s has a catalogue, mail-order variety.

Scientists, teachers, museums, and little girls who collect butterflies — these are all among Ward’s catalogue readers and customers. And also among its sources of supply. For Ward’s Natural Science Establishment is the collectingest museum in the world. It is forever buying insects and anatomical specimens, shells and fossils, minerals, and such curiosities as “large shark jaws” (price $12.). But, unlike ordinary museums, Ward’s turns right around and sells them.

Want an albatross skull? (A surprising number of Americans do.) Or a fluorescent rock? Or mounted elephant beetles for a “fine wall decoration”? The albatross skull will cost you about $4. You can have a chunk of North Carolina hyalite (which fluoresces bright green under ultraviolet light) for from 75 ^ to $4, depending on the size. And the elephant beetles will cost you around $16.

Or you want a set of table models showing, in 12 steps, the development of a fish’s face into a man’s? This item goes for $150. Like all of Ward’s specimens, it is thoroughly authentic—the original models were prepared by the American Museum of Natural History.

Ward’s is “solid.” For more than 80 years —since just after the Civil War — it has played a respected and important part in the scientific development of America, especially the teaching of science. It is strictly up-to-date: it even supplied radioactive minerals for the Army-Navy atomic bomb tests at Bikini. Right now there’s a rising demand for radioactive minerals and stones which fluoresce under ultraviolet light. And, in turn, Ward’s is looking for minerals of all kinds. It has urged its contributors, especially museums with surplus mineral exhibits, people with old and forgotten collections around the house, and mining engineers, to see what they can find.

One of Ward’s latest contributions is the development of a plastic jacket within which embryos and other perishable specimens may be sealed for study. Until now, one problem in biological laboratories, whether in hospitals, medical schools, or other research organizations, has been breakage of fragile micro-slides and damage to unmounted embryos. Now, however, Ward’s has found it possible to encase such delicate specimens as the embryos of chicks and pigs in permanent mounts. (See photo on page 66.) Small blocks of clear plastic, called bioplastics, each contain a whole embryo showing a different stage in development. Specimens may be freely passed around a classroom for examination. Under a microscope, the plastic jacket is not seen. Furthermore, the block form makes possible top, bottom, and side viewing, not possible with glass slides.

Mainstay of the establishment always has been the world-wide army of free-lance collectors—boys and girls, prospectors, naturalists, leaders in various fields of science. Last summer a 12-year-old California girl earned $27 by raising black widow spiders. A Texas woman does quite well supplying cattle ticks. An 87-year-old man sends butterflies, and a man in Peru sends rare jungle specimens.

There’s an interoffice communication system at the establishment which is apt to startle visitors, but which also gives an insight into the amazing variety of daily business. At any hour of the day the speaker is apt to blurt, in loud, metallic tones: “How soon can you deliver ten black widows? . . . The Blank City Museum wants a meteorite—rush . . . Ship two human skeletons to Professor Jones of the Hale University Medical School. . (The human skeletons, incidentally, come from India. Americans sometimes offer to sell their skeletons— after death—but no one ever got rich that way: the current market price is only about $35.) One of the Museum’s first big customers was Marshall Field. He once bought a Ward exhibit for $100,000— and the famous Field Museum in Chicago was started. The Smithsonian Institution, Britain’s Royal Museum, and many universities are leading customers. Ward’s business is not all strictly high-hat, however. Ward’s once stuffed Barnum’s big elephant, Jumbo, for $2,000. The stuffed Jumbo was sent to Tufts College, and the skeleton went to the American Museum of Natural History.

A born collector Ward’s was founded in 1862 by Henry A. Ward, a Rochester man whose passion for collecting knew no bounds. When he was three years old he picked up a pebble of hornblende gneiss; after that, he never stopped collecting. That pebble is still in the establishment’s collection.

Ward traveled for years, looking for geological specimens. When he came back to America in 1861, he had a $20,000 collection which was bought for the University of Rochester.