Modern Mechanix
Issue: Mar, 1938
Posted in: Aviation
No Comments on MAIL PLANE TO BE LAUNCHED IN MID AIR (Mar, 1938) 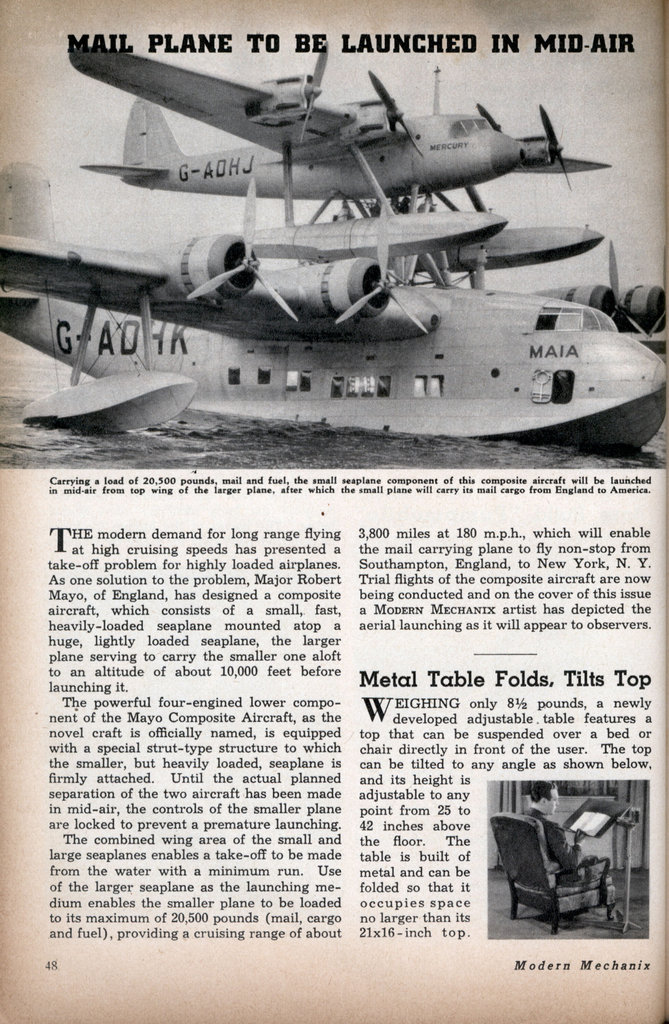 MAIL PLANE TO BE LAUNCHED IN MID AIR

THE modern demand for long range flying at high cruising speeds has presented a take-off problem for highly loaded airplanes. As one solution to the problem, Major Robert Mayo, of England, has designed a composite aircraft, which consists of a small, fast, heavily-loaded seaplane mounted atop a huge, lightly loaded seaplane, the larger plane serving to carry the smaller one aloft to an altitude of about 10,000 feet before launching it.

The powerful four-engined lower component of the Mayo Composite Aircraft, as the novel craft is officially named, is equipped with a special strut-type structure to which the smaller, but heavily loaded, seaplane is firmly attached. Until the actual planned separation of the two aircraft has been made in mid-air, the controls of the smaller plane are locked to prevent a premature launching.

The combined wing area of the small and large seaplanes enables a take-off to be made from the water with a minimum run. Use of the larger seaplane as the launching medium enables the smaller plane to be loaded to its maximum of 20,500 pounds (mail, cargo and fuel), providing a cruising range of about 3,800 miles at 180 m.p.h., which will enable the mail carrying plane to fly non-stop from Southampton, England, to New York, N. Y. Trial flights of the composite aircraft are now being conducted and on the cover of this issue a Modern Mechanix artist has depicted the aerial launching as it will appear to observers.