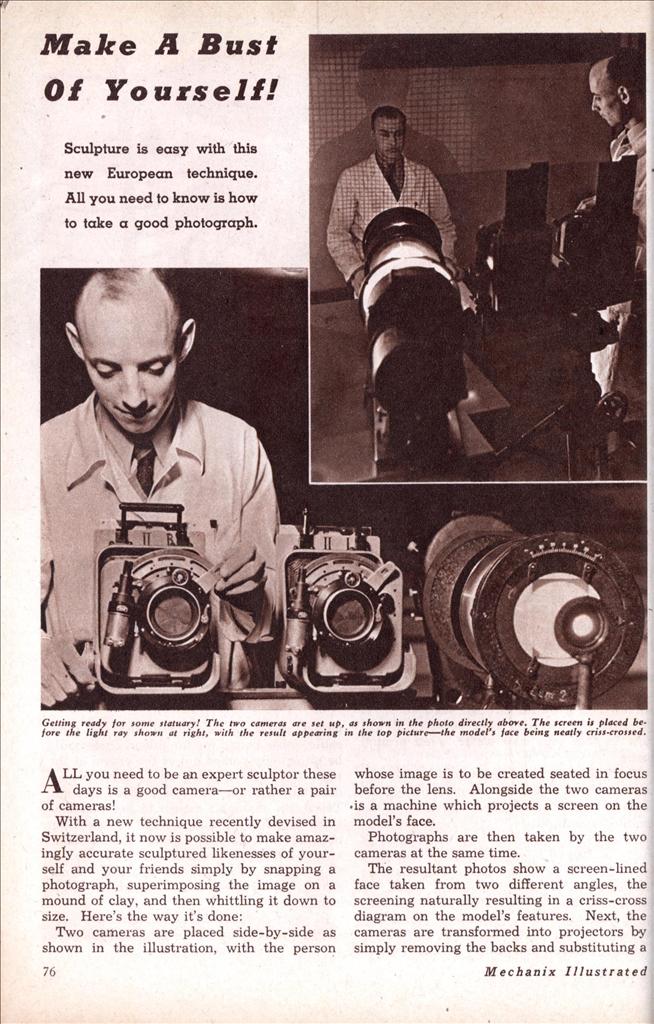 Make A Bust Of Yourself!

Sculpture is easy with this new European technique. All you need to know is how to take a good photograph.

ALL you need to be an expert sculptor these days is a good camera—or rather a pair of cameras!

With a new technique recently devised in Switzerland, it now is possible to make amazingly accurate sculptured likenesses of yourself and your friends simply by snapping a photograph, superimposing the image on a mound of clay, and then whittling it down to size. Here’s the way it’s done: Two cameras are placed side-by-side as shown in the illustration, with the person whose image is to be created seated in focus before the lens. Alongside the two cameras is a machine which projects a screen on the model’s face.

Photographs are then taken by the two cameras at the same time.

The resultant photos show a screen-lined face taken from two different angles, the screening naturally resulting in a criss-cross diagram on the model’s features. Next, the cameras are transformed into projectors by simply removing the backs and substituting a strong light in their places. Now, however, in the exact place where the model sat for his photograph there is placed a mound of plasteline, and the positive transparencies of the two photographs are then projected on this mound, each transparency naturally being projected by the camera that has taken the original picture.

But—when the two screen-lined transparencies are projected onto the face of the actual model, the lines on the screen naturally combine and give the effect of one line, just as seen by the human eye. However, when the positives are reflected on the mound of plasteline—which has a different surface than the model’s face—two distinct lines are visible for each wire in the screen. And therein lies the secret.

To get a mask of plasteline that will be an exact image of the model, all the sculptor has to do is mould and shape the plasteline until the two lines for each wire of the screen come together to make one. In other words, it’s like getting the mound of plasteline into focus.

Results to date with this type of sculpture have been extremely accurate and lifelike. The process is said to save considerable time and effort, in addition to eliminating the necessary artistic background required of normal modeling procedures. An even greater advantage of this new method, however, is that, with it, one needn’t sit for hours while his likeness is being moulded; it takes no longer now than it would to have one’s picture taken.