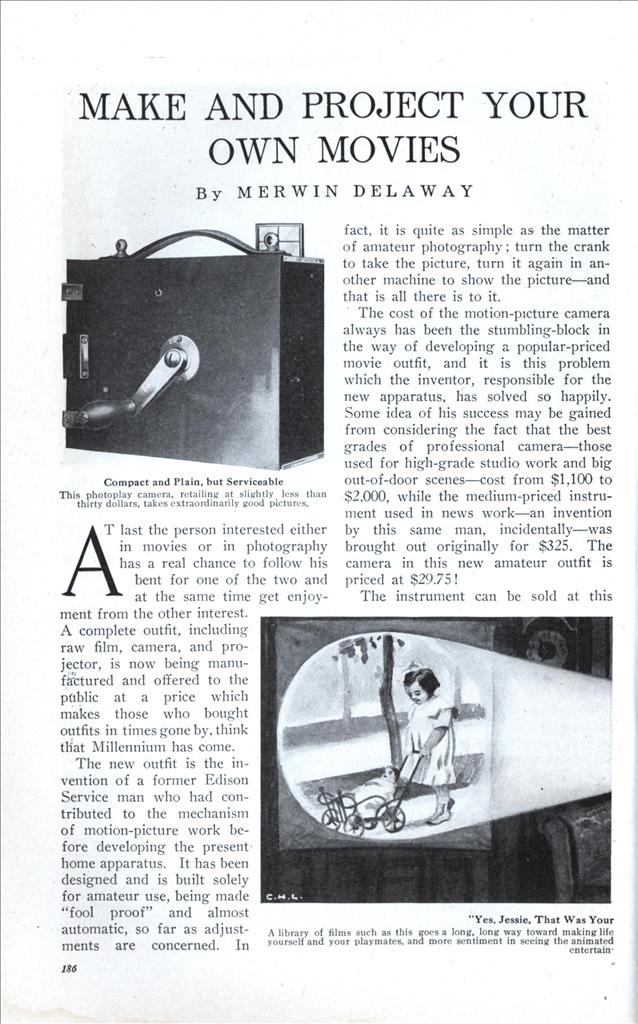 The new outfit is the invention of a former Edison Service man who had contributed to the mechanism of motion-picture work before developing the present home apparatus. It has been designed and is built solely for amateur use, being made “fool proof” and almost automatic, so far as adjustments are concerned. In fact, it is quite as simple as the matter of amateur photography; turn the crank to take the picture, turn it again in another machine to show the picture—and that is all there is to it.

The cost of the motion-picture camera always has been the stumbling-block in the way of developing a popular-priced movie outfit, and it is this problem which the inventor, responsible for the new apparatus, has solved so happily. Some idea of his success may be gained from considering the fact that the best grades of professional camera—those used for high-grade studio work and big out-of-door scenes—cost from $1,100 to $2,000, while the medium-priced instrument used in news work—an invention by this same man, incidentally—was brought out originally for $325. The camera in this new amateur outfit is priced at $29.75!

The instrument can be sold at this price solely and simply because of the many simplifications embodied —simplifications some of which were invented for the purpose, while others resulted from leaving off parts necessary for the more exacting photographic technique of professional filming. The resulting camera is about the size of a standard book—seven inches long, five inches high, and two and one-half inches thick. It may be carried in the hand like the ordinary camera, and except for the crank, looks like the typical amateur “box”.

The projector is designed to run on ordinary house current, and to give a brilliant screen picture at distances ranging from twelve to fifteen feet. A special non-inflammable film has been developed to meet the universal underwriters’ and police prohibition against the use of ordinary film in homes, and the company furnishes it in fifty-foot reels through dealers and agents. The film takes almost twice as many pictures to the foot as the professional material, and is so prepared in spools that daylight loading, unloading, and handling is as practicable as with film used for ordinary “still” work. The combination of a special size camera, film and projector is the big point which makes the new apparatus practicable, for it enables the amateur to take and show his own pictures without getting into trouble, since most of the apparatus offered heretofore has either lacked one of these three essentials, or has employed a standard size film, use of which is prohibited in homes.

The home that owns and uses this compact little outfit constantly is laying up a wealth of thrill and happiness for the future. Think of the pleasure, in after years when your son or daughter grows up and leaves home, of having a complete film record from cradle days up! Think what a generous filming of the scenes of your honeymoon would mean to you now! The greatest single pleasure that it is possible to store up for the days of old age is a wealth of reminiscences of happy hours spent in youth with comrades or people you care for in a sincere and lasting way. The old people of today have only their dimming memories to depend on; those of tomorrow will have libraries of this film. This camera ought to add greatly to the joy of every family.