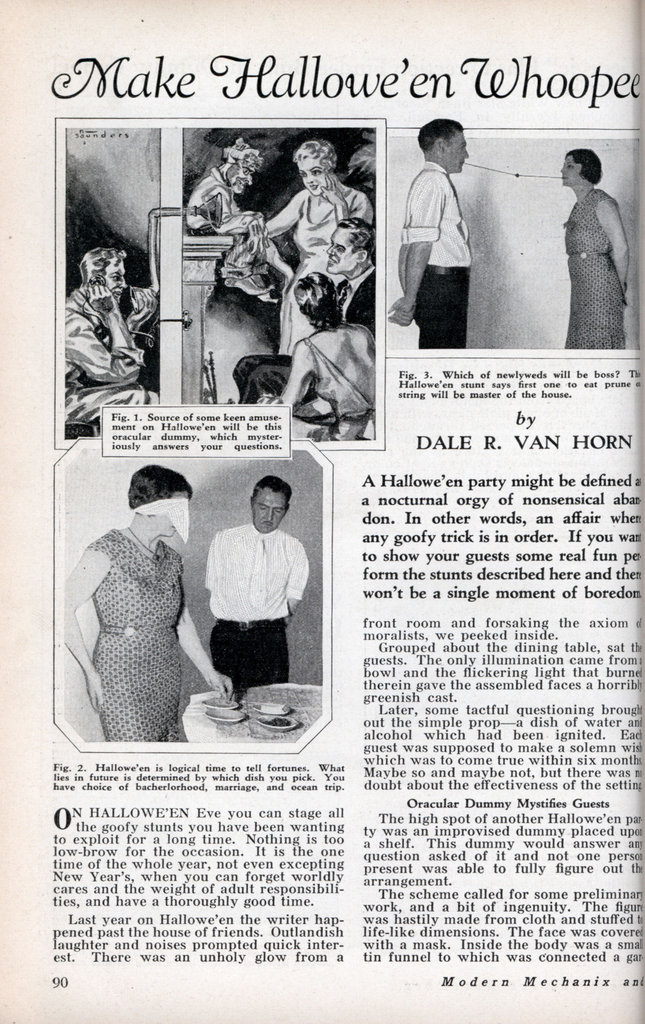 ON HALLOWE’EN Eve you can stage all the goofy stunts you have been wanting to exploit for a long time. Nothing is too low-brow for the occasion. It is the one time of the whole year, not even excepting New Year’s, when you can forget worldly cares and the weight of adult responsibilities, and have a thoroughly good time.

Last year on Hallowe’en the writer happened past the house of friends. Outlandish laughter and noises prompted quick interest. There was an unholy glow from a front room and forsaking the axiom of moralists, we peeked inside.

Grouped about the dining table, sat the guests. The only illumination came from a bowl and the flickering light that burned therein gave the assembled faces a horribly greenish cast.

Later, some tactful questioning brought out the simple propâ€”a dish of water and alcohol which had been ignited. Each guest was supposed to make a solemn wish which was to come true within six months. Maybe so and maybe not, but there was no doubt about the effectiveness of the setting.

The high spot of another Hallowe’en party was an improvised dummy placed upon a shelf. This dummy would answer any question asked of it and not one person present was able to fully figure out the arrangement.

The scheme called for some preliminary work, and a bit of ingenuity. The figure was hastily made from cloth and stuffed to life-like dimensions. The face was covered with a mask. Inside the body was a small tin funnel to which was connected a garden hose as illustrated in Fig.1 . With a lookout to relay the questions, the “oracle” had only to know the questions and concoct appropriate answers aided by nimble wits. Pains must of course be taken to muffle the tones from the other room.

An ideal place for a more pretentious party is some shed or old house. Here freedom is greater and you can more easily set up special tricks.

The outstanding thriller of one such party was a draped off corner in a darkened room. It was imperative that each guest go through this ordeal, called “Crossing the Desert” for some inane reason. One at a time, a guest was ushered behind this corner curtain. Once inside an operator released a cord and the victim found himself completely enveloped in a shroud. The process was invariably accompanied by shrill yells and shrieks.

The mechanism, simplicity in itself, is shown in Fig. 5. Two barrel hoops, one larger than the other, some cloth, a small pulley and some cord were the props needed. The larger hoop was fixed to the wall and both hoops sewed to the ends of a cylindrical enclosure of cloth. The smaller hoop was drawn up through the larger and held there by cords as shown. At a given signal, the smaller hoop was released and fell to the waist of the victim. A pull on the cord and the initiated was released again.

If you are to stage the party in an old building, the tricky platform will prove a real thriller. This 4 foot square platform is raised above the floor about 7 inches. It is placed where each person must pass over it. In front of a door is an ideal place.

Fig. 9 shows the installation. Four 6 inch sticks are bolted to cleats nailed to the under side and one vertical stick is connected to a longer stick which passed through the wall and to a lever mounted outside. It should be so arranged that when the lever is upright, the platform supporting sticks are also upright. The operator then merely waits until vibrations tell him someone is on the platform, then the lever is pulled sharply over. Stop blocks beneath the platform prevent it from falling more than 2 inches, but this fall is not only quick, but also sideways, and it will give the victim a decidedly scrambled equilibriumâ€” for a moment.

According to legend, Hallowe’en Eve is the logical time to tell fortunes and foretell the future. There are many interesting games and methods to be used. Here is one:

Blindfold the subject. Place four dishes of the same kind on the table as in Fig. 2.

In one place a piece of cloth, in another some soil, in another water and in the fourth a wedding ring. Turn the blindfolded person around three times, then have him or her place a finger in one of the dishes.

If the rag is chosen, the oracle says that person will be an old maid or bachelor; if the water, an ocean trip is in store; if the ring, wedding bells will soon ring; and if the dirt, divorce lies ahead. Silly, but quite interesting and laugh-provoking.

If you want to impose a hardship, have a guest walk down stairs backward with a mirror in his or her hand. The stunt looks simple, but isn’t. Have willing hands ready to catch the victim if necessary.

The biggest shock of a whole evening once was caused by a pair of pie tins. An operator, hidden in a corner, waited until all was quiet. Then he let go with these, one on each hand. The effect was electric. These gadgets are easily preparedâ€”a small strap on the bottom of each tin for the hands to pass through. Two of these will make a lot of noise.

If an about-to-be-married couple is present, you can turn their discomfiture into chuckles with a prune and piece of string.

With a few appropriate words the pair can be told that now is the time to find out who will be boss in their household-to-be.

The prune is threaded to the center of an 8-foot string, then, at a signal, each person starts to “eat” his end of the string. The person first reaching the prune will, without a doubt, be master of the home. Fig. 3 shows this stunt being worked out.

When it is possible to have the guests pass through two or three rooms to some inner chamber, by all means insist that they follow the cord. This cord runs from one lighted room, through the dark rooms to the other lighted room. See that raw oysters are strung on this, 6 inches apart, as soon as the string is out of sight.

Before the evening is out, be sure to have someone sit on a round bottle with a needle. Have another person, of the opposite sex, sit on another close by with thread. The stunt is to thread the needle when in this position.